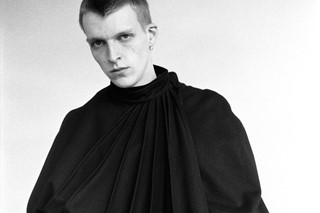 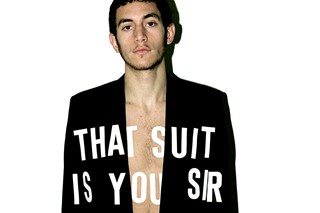 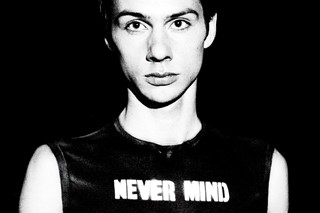 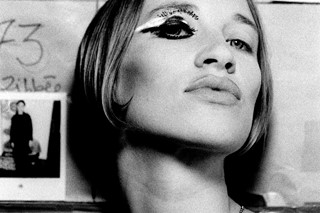 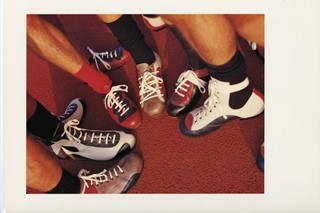 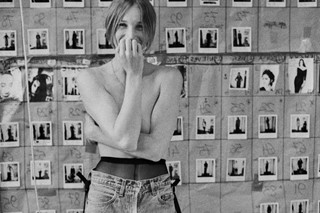 It’s fashion folklore – how in 1986, a gang of Belgian designers bundled into a van, headed across Europe and caused a stir at a London tradeshow, making their mark indelibly on the decades of fashion to come. Alongside the designers (themselves all graduates from the Antwerp Royal Academy of Fine Arts under Linda Loppa) was Geert Bruloot, the owner of cult shoe shop Coccodrillo. To mark the opening of FootPrint, The Tracks of Shoes in Fashion at Antwerp’s MoMu curated by Bruloot, he recalls those early days with what would become the Antwerp Six. This piece is an excerpt from a longer interview – head over to 1 Granary for the full story.

“In the 80s, there was Dirk van Saene’s store in Antwerp which is where I met Dirk and his partner Walter van Beirendonck. A few months later, Martin Margiela came into my store, Coccodrillo, before he went to work for Jean Paul Gaultier. He said that he had a shoe collection and asked if we wanted to sell it. So I went to his flat to see it, and it was amazing – I bought all of it. Ann Demeulemeester actually came into the store to buy these shoes.

A year after that, I met Dries van Noten because I was at that moment also dressing windows for other stores. He mentioned the Golden Spindle contest (an initiative launched by the Belgian government to promote designers), and said that they needed somebody to do the scenography and the coordination with the music. He asked me if I wanted to do it. Although I had never done this before, I agreed. Dirk Bikkembergs won the contest, whom I met and got into conversation with. ‘Your shoes are amazing and we want to sell them!’ I told him. Dirk said that they weren’t produced, so he went and saw his manufacturer who said: ‘Ok, we’ll make them but Geert has to distribute them because we have no agent.’ So I said ok.

“As they could not pronounce (the designers’) names, they just started calling (them) the Antwerp Six.”

After two seasons we went to Tokyo because our trip was paid by the government. I stayed there with the designers and realised the potential of what I saw. These designers were so talented, not only in their collections but also in the way they presented themselves. Before that, ready-to-wear fashion was a secondary part of the couture houses. Then the Japanese came and they started deconstructing fashion. No more glamour shows with top models, but just models from the street walking between the chairs. Then we had the Belgians; I realised what was happening there, and in that time London was big. You had Vivienne Westwood, Katherine Hamnett, Body Map, Culture Shock and John Galliano was just starting out. So I said, ‘I’m fed up travelling with your shoes in the countryside. Please, I have one solution: let’s go to London’s British designers show.’

And then I thought: ‘Only shoes? No way. I need clothes.’ I went to see Walter and told him about our plan. I asked if he wanted to make a collection. He said OK. I was already working with Dries at that time. He heard of it and went: ‘Why can’t I come?’ Then I had the idea: of course, they all have to come. We all united, rented a truck and went to London to show the collections, and that’s where it started.

In London, all the designers were on the first floor of the building, and we were on the top floor next to the wedding gowns. All the buyers never went to the second floor – we noticed this on the first day. The next day we made flyers and started distributing them on the first floor, and sometime around mid afternoon that day, we suddenly had Barney’s there. These were the first orders we had. An hour later it was full of press, cameras around: ‘Where did you come from? It’s like you came from another planet, we never heard of you! This is so fantastic!’ As they could not pronounce (the designers’) names, they just started calling (them) the Antwerp Six.

The next season we were invited by the Pitti organisation to show at Pitti Trend in Florence, but we didn’t have money to go. We often sat together at Dries’ place and Walter was always a box of ideas for all these kinds of things and he said: “Why don’t we rent a mobile home?” You know, those trucks you can live in. The day after, we rented two of them which we (filled) with all the furniture, the collections, the mannequins, the tents, the designers, and we drove through the Alps to Florence.

“I think there’s a bit of an urge today to become a star very soon. But, the Antwerp Six didn’t have that. They had this dream and this healthy naivety to believe in it”

I think there’s a bit of an urge today to become a star very soon. I can feel this with the students (of the Antwerp Fashion Academy). But, The Antwerp Six didn’t have that. They had this dream and this healthy naivety to believe in it. They knew that one day they would make it, but that was it. They were sure that what they were doing was good. It went much faster than they had foreseen. We went to Paris and showed twice as a group, but then Dirk Bikkembergs only did menswear so he had to split to do the show for men; Dries needed a bigger show because he was booming, and so the whole group split up. It felt like a pop group splitting up.

Since it started, so many people have been asking us the same question: What’s up with these Six? One American journalist wrote: ‘What’s in the tap water in Antwerp?’ It remained an enigma. Why and how? It is very difficult to explain. I think it has to do with the political situation in the 80s, when the world was changing very fast and we became a global community; where the identity of a small country suddenly saw the possibility to become one of the players in this global story. We saw the future.”