A maverick collective made up of photographers, designers and artists, it is impossible to mention 80s youth culture without referencing Buffalo. The disruptive and radical movement transformed the way that society absorbed fashion with a pioneering style that became one of the most influential of the decade. “At that time, there was no such thing as a stylist,” remembers Buffalo alumni Barry Kamen of Ray Petri, the movement’s leader, who died of Aids in 1989. “There were fashion editors, but the word itself didn’t exist, so Ray created that.” Other founding members included photographers Jamie Morgan, Mark Lebon and Cameron McVey. The word itself was a Caribbean expression adopted by Petri, used to describe rude boys and rebels.

Petri grew up in Scotland and travelled through India and Africa before landing back in London in the late 60s. He applied this tapestry of culture and sartorial landscape to a youth-charged aesthetic that threw MA-1 flight jackets, sportswear and Che Guevara hats with the decade's leading fashion designers; Armani suit jackets with Dr Martens boots, tribal headwear and kilts. Music also greatly influenced his work, inspired by Motown, punk and reggae. Neneh Cherry, Culture Club and Soul II Soul took Buffalo to the musical main stage, and its effect rippled the world over.

“She was just this nutty girl aged about fourteen, but she was part of the crew” – Barry Kamen on Naomi Campbell

The models used by the collective were also diverse – street-cast characters that carried the clothes, not the other way around. “She was just a kid,” remembers Kamen of Naomi Campbell. “She was just this nutty girl aged about fourteen, but she was part of the crew.” Petri’s work was daring, soulful, inventive and, ultimately, revolutionary. It was the antithesis to the current fashion of the decade, and brought together a gang of friends and a style that would eventually filter onto the catwalk, in the work of Jean Paul Gaultier, Yohji Yamamoto and Comme des Garçons.

To mark the thirtieth anniversary of Buffalo, Jamie Morgan and Barry Kamen have joined forces with Dr Martens to create a contemporary interpretation of the cult movement, celebrating Petri’s groundbreaking style. Watch a documentary narrated by Neneh Cherry exclusively above, and read Morgan and Kamen’s memories of the time below.

ON THE SPIRIT OF BUFFALO:

Jamie Morgan – “It was experimental and it had never been done before. There was no template or references, instead our references were American Indians and photographers from the 1930s, so it was very different back then to how the industry is now. There was no Internet or mobile phones, people met in clubs, at parties, on the street, and it grew over quite a long period of time. It all happened live – you would turn up at the studio, put the music on, smoke a spliff, and people would just arrive throughout the day. We would transfer our lives to the studio and start working. There is power in that, because it is authentic. Also, you were shooting on film so you didn’t even know what you were shooting, it was just there contained within the film, so you were living it as opposed to having an outside view. However the key element of Buffalo is that a Buffalo image is styled by Ray Petri. That is what Buffalo is, and it was formed to support his vision.”

Jamie Morgan – ��I found Nick Kamen in the model agency under ‘black models’. I said, “This guy isn’t black, he’s half-Burmese,” and they replied, “That’s as black as we go, I’m afraid.” There just weren’t black models back then, so we found them on the street, through friends and through word-of-mouth, we never used models from agencies. It was about the way they walked and stood, not just how they looked. It was about the attitude, mixing genres and the idea of gender and models and turning it all around.”

Barry Kamen – “He took these kids off the street and put them in front of the camera for the first time. A mixed-race boy is now the normal, quintessential, good-looking boy, but at the time it was shocking.”

Jamie Morgan – “Felix was the son of a friend that we knew. He was a 13-year-old boy, but had the face of an elder person. To me, from a photographic point of view, it was a direct kick against the photography that was happening at the time in fashion magazines – pretty, colourful, female images. I worked at a photographic agency called Magnum, which specialised in reportage, war photography and proper, old-school black and white images. So that was the influence – 35ml film, grainy, reportage portraiture, and taking that and a model who was completely out of context, and getting away from the idea of what a model is. The word Killer is important, because it’s a Jamaican term. In the same way we might go “wicked,” they would go, “killer, man,” so it has a double meaning. Ray included that as a bit of a punk statement, as in, ‘this shot is killer, and make no mistake.’ In a way he was being quite humorous.”

“It was about taking gentleman’s hats and different sartorial influences and putting a Jamaican spin on it, then dressing these things on a young, 13-year-old Jewish boy” – Barry Kamen

Barry Kamen – “It was about taking gentleman’s hats and different sartorial influences and putting a Jamaican spin on it, then dressing these things on a young, 13-year-old Jewish boy. It was giving it a different spin, and then putting the headline on it, like the front page of a newspaper. In 1983, people read it literally, until the word filtered into the language. These words, like hard and wicked, they weren’t known.”

ON THIS BUFFALO CLASSIC:

Jamie Morgan – “To me, this is quintessential Ray Petri styling. It’s got the tough stance from the model, which is a very sexy, cool stance. He’s wearing a leather skirt which is a woman’s item of clothing, we have the sexy midriff, strong arms, a touch of vulnerability and a porkpie hat, we’re mixing it all. Is he sexy, is he strong, is it aggressive? The vulnerability and strength of a guy and giving a man the same status as a woman.”

Barry Kamen – “A boy in a skirt, at the time, it was just not done. Ray came from Scotland where men wore kilts and then went to Africa, so it felt very natural to him to put a man in a skirt. Then Jean Paul Gaultier saw this and it filtered right into high fashion. Gaultier was very much part of the crew, and he shared so much with us. He saw what we did, as did Yohji Yamamoto – these were the people that saw we were doing something important and worked it directly into their catwalk collections so very quickly it filtered into the mainstream.”

See Dr Martens’ Spirit of the Buffalo collection below:

Dr. Martens Spirit of the Buffalo7 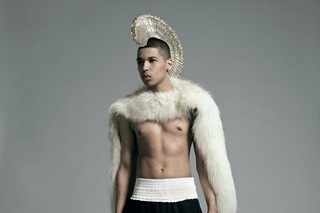 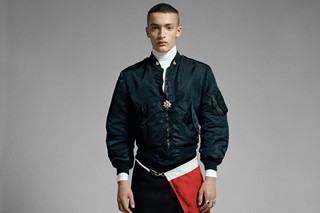 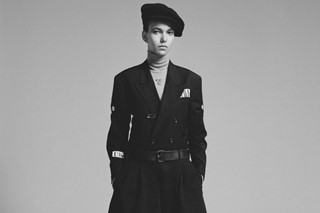 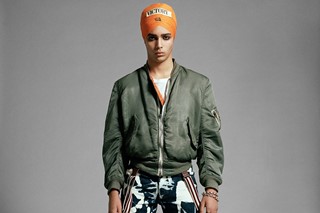 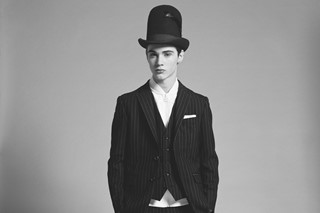 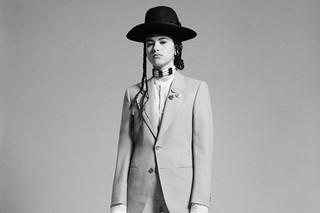