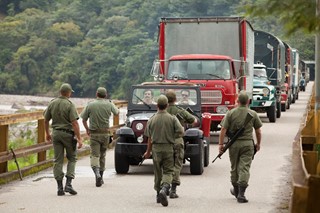 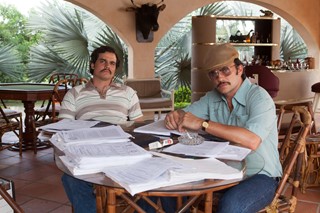 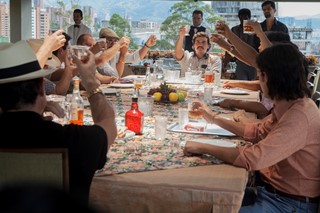 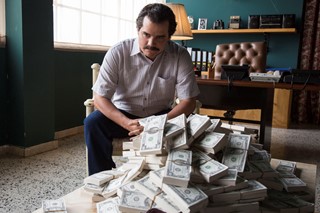 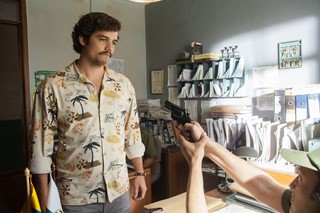 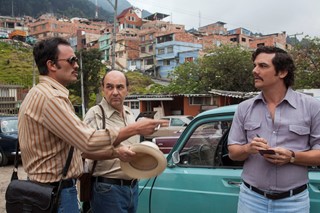 “Power is measured by the gram.” That is the punchy tagline of new Netflix original Narcos. Planted at the height of Colombia cocaine-trafficking to Miami in the 70s, Narcos hoovers up the history behind notorious cartel leader Pablo Escobar and his international dealings. The drugs, the girls, and the payoffs – Narcos is kind of like Breaking Bad from the cartel’s point-of-view. Escobar is rolling in the deep until a green DEA agent (played expertly by ex-model Boyd Holbrook) flies into town and starts sniffing around.

Embedded in the 70s and 80s, the outfits these crime bosses wear are paramount to telling an authentic story. Lead costume designer Bina Daigeler buried herself in research to create nearly 500 authentic costumes and source the remaining 3000 period costumes she needed to kit out the hustlers and their hunters. Here, Daigeler gives us a sartorial guide to pimping out your wardrobe like a cartel leader – without the drugs.

IF WHAT YOU NEED DOESN’T EXIST, CREATE IT FROM A MUGSHOT

“I had all the research for Pablo Escobar. There is this mugshot from when they arrested him in 1976 (below). It was very famous but we wanted to make exactly the same shirts for (actor Wagner Moura), so we printed the fabrics of the shirt from the mugshot in Medellín – a village in Colombia – and we repeated the shirts. We did a lot of things very similar to what we found in famous pictures. You try to buy authentic fabric, you try to make it and the rest comes from costume houses, like the real period pieces for the crowd.”

KEEP IT SIMPLE WITH A ROOM FULL OF WHITE TRAINERS

“They were so rich these beauty queens from all around South America. They were really dressed up in the 70s and the 80s: big hairstyles, big jewellery and very, very sexy. They wore high heels and very tight mini-skirts in pink and blue – always over the top, always modern and a little bit bohemian. They were colourful and sexy and we made a lot of things for the journalist character Valeria Velez. We had all this fancy jewellery and that was a lot of fun. A costume that’s too sexy doesn’t exist. They wore leggings and belts, they were beauty queens!”

“Miami Vice was an inspiration, but definitely not for our cops or for the DEA because with them I tried to be more realistic. We were telling a true story so we tried to be realistic so people can identity with them. I never went over the top. All the boys in the uniforms, we tried to stay as authentic as possible. Since the DEA and the police are chasing (Pablo), I tried to make them real – like a documentary – so it looks real but is still appealing to the people.”

“The military uniforms worried me because they had all of the Colombian military chasing them. There was an evolution from the 70s to the 90s so they changed, they wear different hats and they were only in Colombia – you couldn’t get there anywhere else. So we made them, but of course they are completely different. That is a worry because the people still remember it, there are a lot of people alive and they know that’s correct and that’s not correct. I think it is important to stick to the reality.”

“This documentary called The Cocaine Cowboys is fantastic. Once you start (researching), you can’t stop. I could research my whole life. You find so much inspiration and you take all this inspiration and transform it into what you want to show on screen. It was really important to have a good mixture between something very visual and very contemporary but, on the other hand, trying to get very realistic so that it doesn’t look like we are doing a South American soap opera; I wanted it to look real.”