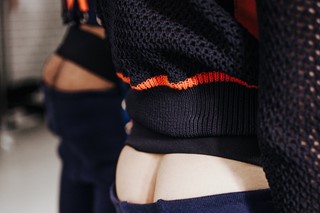 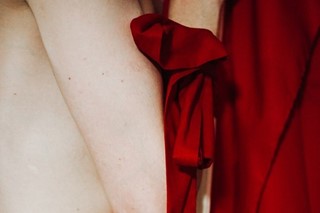 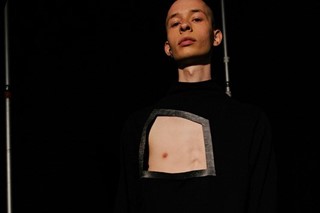 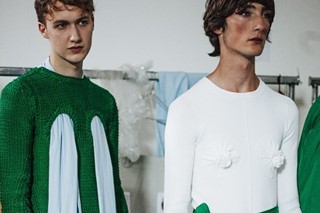 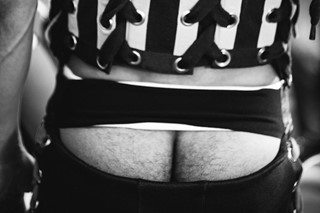 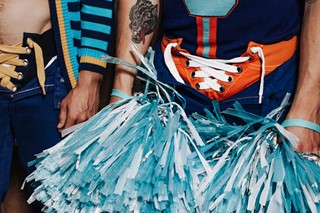 The first audible gasps at LC:M came at Sibling – not as the beefcakes lumbered down the catwalk (to a remix of "No Beef" by Miss Palmer, of all tunes) kitted out in American football uniforms, but when they made the about-turn to head backstage. The frow was treated to a half-moon spectacle: models’ buttcracks crested over a strategically-placed window in a pair of thigh-hugging bumster trousers. Cameras flew up to capture the crack-tion, hashtag #cheeky.

Buttcrack is back. It was all business at the front, party at the back. “It feels great, it was liberating!” beamed one model backstage. “It was my first time (showing my buttcrack), it was fun. I hope everyone enjoyed it.”

The fronts of trousers were loosely laced, a nod to the homoeroticism of testerone-pumping sport. “It’s sort of odd – you talk about jocks and there’s just this incredible sexiness about an American football player or basketball player,” said Cozette McCreery, one third of Sibling, after the show. “I’m getting a bit hot under the collar just thinking about it.” Most of the jock theme that underpinned Sibling was played quite straight, but the backdoor surprise was truly unanticipated.

This ‘liberation’, fetishizing parts of the male body that aren’t normally deemed venereal – the upper abdomen, the lower back – is creating a new sexual attitude in men’s fashion. Designers like Sibling, Craig Green and MAN’s Rory Parnell Mooney are lionizing the male, sensualizing unexpected segments of the male body. They’re holding up a mirror up to the male gaze.

Parnell Mooney integrated peepholes in the vein of Mean Girls in his collection, shifting focus to nipples and belly buttons. “We really wanted to reveal the body but also cover it up, reveal more than is normally seen,” he told us backstage. “I very rarely see a belly button or a nipple out on the street. It was this message of protest – maybe it is free the nipple. Why not?”

“I very rarely see a belly button or a nipple out on the street. It was this message of protest – maybe it is free the nipple. Why not?” – Rory Parnell Mooney

The ongoing feminist campaign to #freethenipple – backed by rebels like Miley Cyrus and Rumer Willis – is infiltrating men’s fashion; however, it’s more the concept that these parts of our body can be “symbols of power”, as Craig Green described, rather than simply provide shock and awe for Instagram. So what if we took away that power? Green did as much in his collection, bunching up fabric and pinching it off at the nip, which calls to mind a teet sucked dry.

The power was diminished, but not lost. His was a textile statement that declared, “Nope, you ain’t getting a peek of these!” Perhaps he was rightfully deflecting attention towards the feminist cause to #freethenipple – after all, there isn't much left to ‘free’ in a man’s world. But when you sexualise unexpected areas of the body, attention is justly perked.

Rick Owens, now famously, paraded penises down the runway for his AW15 SPHINX show. You can measure its effect in column inches as news outlets scrambled to justify the meaning behind exposed phalli. Thing is, it was so downplayed many onlookers left shrugging off another fairly decent collection, only realising afterwards that Owens made a whopping assertion in the form of dangling cocks. The bumster trouser made famous by Alexander McQueen rocked the fashion world in the 90s, but as fashion got indiscriminately sexier over the decades, that ability to shock all but disappeared.

So what’s left to reveal? The stakes are higher than ever. We have to train our gaze to fixate on less predictable areas. Helping us to look with new eyes and question what we find arousing are these LC:M designers giving us what we never knew we wanted – a belly button, a buttcrack. More than injecting seduction where it wasn’t present before, they’re entering the arena of body politics, using their creations as protest for what’s acceptable to show and hide. This time around it’s all about rewriting gender codes and transposing those obvious symbols of power to pastures new. Now it’s up to us whether or not we want to put it all on show.