Tales of raves past: the London menswear designer reflects on nostalgia and her outsider obsession – plus listen to the tracks that inspired it 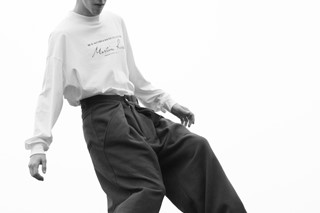 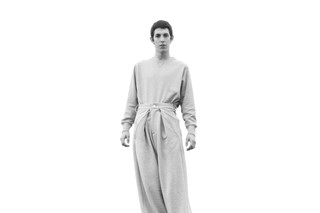 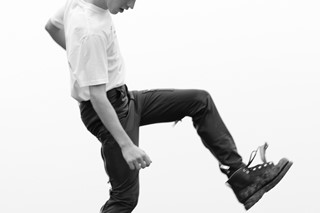 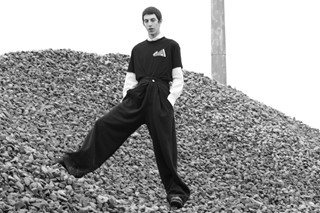 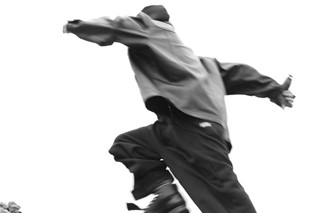 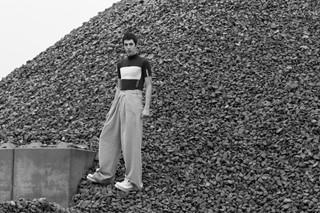 “My work is always about the outsider,” admits London menswear designer Martine Rose. “Even in my personal life… I’ve always been fascinated by those people.” Inspired by the past but never derivative, Rose’s work exists where the strange and the beautiful collide. It’s a crossroads where preconceived ideas of masculinity and sexuality are unravelled by the unexpected – trousers flare in exaggerated folds, a jacket made of soft nappa leather is a boxy cross between the urban silhouettes of the 90s and traditional workwear. “I really want to generate something beautiful and interesting,” she muses, “and I feel like that comes when something isn’t quite right.”

While past seasons have seen her take references from London’s early rave scene, the underground S&M subcultures of the 70s and even skinhead romances, for AW15 – a collaboration with the web-obsessed fashion, music and art collective #BEENTRILL# – she turned inwards, finding inspiration amongst her own expansive archive. “With this collection it was more about looking back at all the characters I’ve used previously,” she says, including the likes of Robert Mapplethorpe and Mark E. Smith (“difficult, genius and complicated”). Here, Rose reflects on being a pre-teen raver on Clapham Common, her obsessions with the odd and the pressures of being a London designer.

How did you approach this collection?

Martine Rose: It was an organic conversation with #BEENTRILL# – we were introduced by Kim Jones, and started speaking about music, and our references and starting points all seemed to be the same. We were looking at the crusty scene, which was a big influence for me for AW14 – that sort of ‘raver in a field’ silhouette. The collection has that feeling about it, but it feels more polished and very sportswear. It’s a sporty crusty ravey type vibe!

Patches seem to be something that you return to...

Martine Rose: Patches are so…unintentional, they aren’t something I try to own or that I try to bring in each season, but it’s a way that I communicate... they are a way of showing your colours. I was a competitive swimmer until I was a teenager, so we had these swimming costumes that were completely covered in badges, almost like an armour – I’m quite obsessed with the idea of achievements. I like things that don’t necessarily fit together, when there’s something a bit jarring. So sometimes if there is a coherence to the look, adding a few badges that just say odd things can throw it off.

You’ve used them before, but where did the slogans – ‘expect perfection’ and ‘90-91 Autumn & Winter collection’ – come from?

Martine Rose: ‘Expect perfection’ is a slogan that I started to develop in AW13. It was something that became synonymous with that collection, which I’m very fond of. I like the ambiguity of the phrase, and I love that it’s a beer slogan as well. It’s sort of nothing and everything at the same time. As for the other, it’s just because it was the wrong season and the wrong year, and I like things that don’t sit that comfortably, so to change the date and the season was another way of doing that. This collection was an opportunity to actually look back at the pieces that were really successful that still have mileage, and that t-shirt was one of them.

Martine Rose: Yes! I was bloody swimming! Actually, after everyone had finished raving at Camden Palace, they used to congregate on Clapham Common, and there used to be sound systems that came over. Everyone would come with their cars, but because it was a Common, we – the kids – could come too. It was this weird rave experience I had when I was a pre-teen. Everyone was on a massive comedown, but of course I didn’t know that! All I knew was that people carried on dancing there on a Sunday afternoon. I guess the demographic of the area changed and the residents were really not happy about all of those crusty ravers there on a Sunday...

It’s interesting that as a designer, you’re so willing to look back into your own archive when there can be so much pressure to create something new.

Martine Rose: I think designers need to get the balance right. I think it’s our job to do a little bit of both, to acknowledge the past and at the same time try and communicate it in a new way. I think that the idea that we’re going to do something new is a fantasy really. At the end of the day the trousers have got to have two legs and the top – there are certain things that we have to abide by. I guess I’m a nostalgic person, and it always comes back to influences that I’ve experienced or that feel like a memory to me, but innovation has to be mixed with that.

How did you approach the lookbook?

Martine Rose: The style is all really new, I haven’t shot images like these before, because it’s outside. Even though the silhouette feels familiar and the fabrications feel familiar, the whole collaboration feels really new. It was street cast and again, this boy is just beautiful – oddly beautiful. He really captured the feeling of the collection, of a slightly grown out skinhead, raver person.

Finally, last week Meadham Kirchhoff said that they’re not going to be doing shows for the foreseeable future – what’s it like to be a designer in London right now?

Martine Rose: It’s fucking hard. I absolutely support what they say, it’s incredibly hard to keep going season after season and pulling money out to do these incredible spectacles show after show, it’s just crippling. It's part of the reason why I stopped doing catwalks and became more interested in a different way of presenting. It’s an old model of business that needs updating in many ways. It’s very hard. Also in our climate... So many people are struggling, so it feels superfluous, it seems a bit gross sometimes, when you’re spending this much money on something like a show.

Do we need more schemes to support new designers?

Martine Rose: London is my city and I love it, and I’m so proud of it for the support that we have, so proud to be here, and to have benefitted from the help. But I don’t think it’s about more help – it’s really the whole model of wholesale that needs revising, and I feel like it needs to come from the designers, because we understand and we’re at the frontline of how it actually fails. We really understand. I feel like the business model itself hasn’t kept up with the times. The season scheme doesn’t work and the method of how we sell and how we get paid seems a bit crazy. I’m very sad to hear about Meadham Kirchhoff, but I absolutely understand.

To celebrate the new collection, Rose put together a playlist of the songs that inspired AW15. Check it out below: