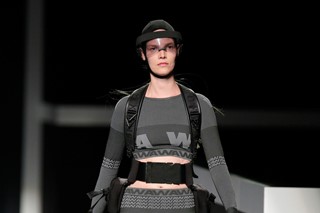 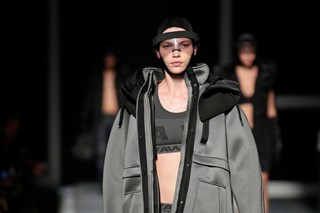 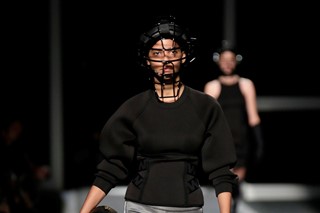 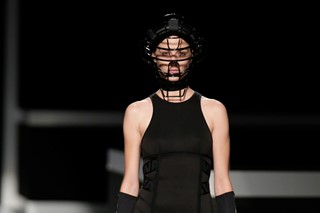 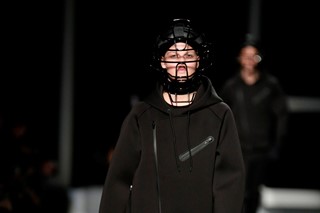 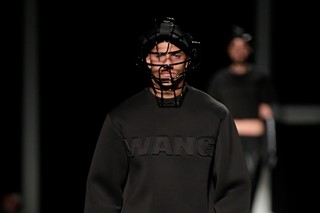 Alexander Wang took to the track to reveal his inaugural H&M collection in New York last night – or more accurately, he took over the Armory on the Hudson, a gargantuan indoor track and field complex in Harlem. The choice of location was more than calculated: basically, if you weren't already a gymn bunny, you left Wang's show wanting to drop twenty.

The show's adrenalin-pumping opening featured free runners descending from the rafters to do parkour stunts and trampoline off the walls of the multi-level runway set. Then it was time for the collection to hit the stage, with Wang's sports-inspired aesthetic taking front and centre: activewear as interpreted in neoprene scuba caps, knitted two-pieces and football vest-inspired tops and bras.

Hardbody women like Anna Ewers and beefy male models were the order of the day, tattooed in strips of black athletic tape and holding onto Wang-branded sports gear like hockey sticks and boxing gloves. After Wang did his signature lap around the runway for his bow, people scrambled for the pop-up store in a locker room set.

The whole night was capped off with a gig from NJ rapper Sharaya J and a surprise performance from her hip-hop mentor – the one and only Missy Elliott, who performed "Get Ur Freak On" and "Work It".

"Tonight’s event for the launch was about high energy and a full experience that goes beyond fashion; from the attitude and speed of the show, to the pop-up store in a locker-room setting, and the performances by Missy and Sharaya J at the after party,” Wang said.

“I wanted for everyone to be able to just let go and have fun and hopefully we achieved that tonight.” Either that or he just gave everyone a serious case of gym envy.

Watch highlights from the show below: