Clad in futuristic netting and sci-fi glasses, Wang's Balenciaga woman is stalking her way to the end of the world 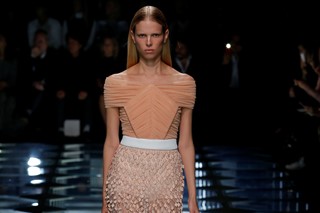 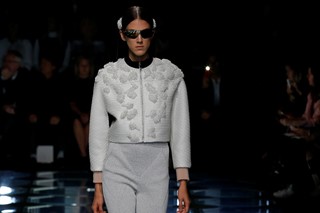 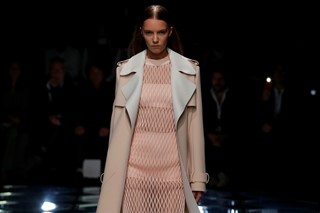 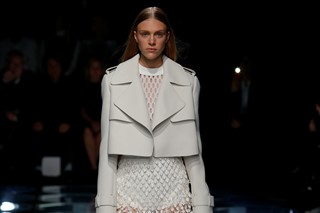 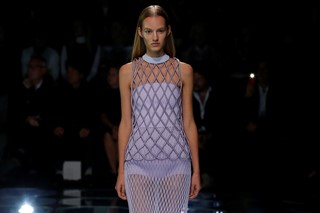 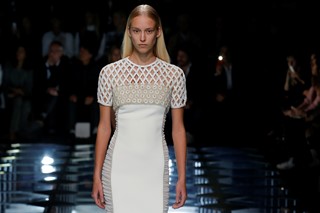 Alexander Wang took his iconic sportswear aesthetic to new heights, elevating his usual suspects of mesh and netting for the Balenciaga woman. The traditional house shapes remained, with rounded jacket shoulders and futuristic tailoring, but Wang successfully brought in strong streetwear references with soft netting on shirts and shifts, and some seriously Matrix worthy coats.

The end is nigh:

Apocalyptic, futuristic and yet somehow still ethereal, this season's Balenciaga vibe was a mash-up of strong silhouettes set against a dark backdrop of booming bass beats. The models stalked down an impressive black gloss geometric runway that billowed up clouds of grey smoke throughout the show. Little North West – attending her first fashion show – obviously got the memo that black would be the colour of choice, and lead both her parents and the audience in a sea of noir. There wasn't a pop of colour in sight.

Regal models channelled an alien-like Tilda Swinton from the recent vampire film Only Lovers Left Alive, with long demure dresses punctuated with strategic mesh panels. The diverse group of models appeared to be storming to the end of the world decked out in futuristic, sci-fi glasses with mirrored lenses. Sharp pointed toes on the shoes, fast becoming a classic Wang shape, only helped to transplant the viewer to a dystopian future where the strong independent woman reigned supreme.

The soundtrack to Balenciaga SS15: