Backdropped against a film investigating how we see ourselves and how others see us, Tessa Edwards presents her collection – featuring a collaboration with cult artist Penny Slinger 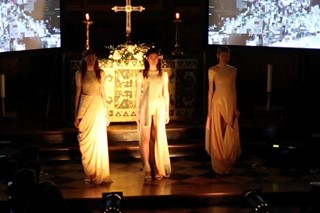 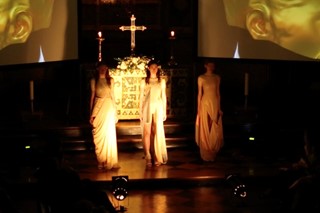 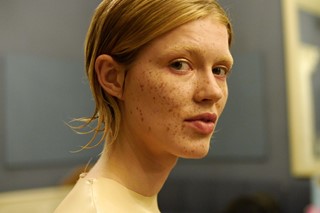 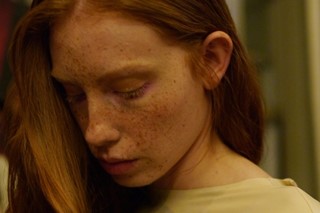 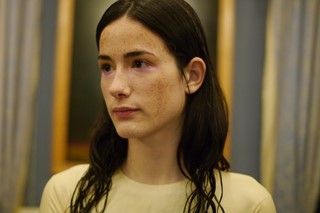 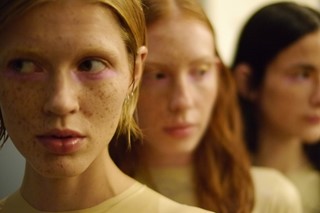 Within the history-steeped King's College Chapel, the audience sat in pews. Atop the altar two large screens presented a film, disseminating a futuristic vision of the world to the new congregation. Unlike other "atmospheric" fashion films where the girl wafts around aimlessly, Tessa Edwards wanted to say something hefty and poignant. The final scene saw the female protagonist arriving at the chapel, and as it ended, three priestesses draped in a cream silicone fabric walked down the aisle. The point wasn't to see clothes but to feel uneasy – here Edwards showed that she is a provocateur in more ways than one.

Edwards worked with 1970s surrealist artist Penny Slinger to transpose her images onto the collection, namely crisp white shirts. Edwards and her sister Grace are also working on an investigative documentary on Slinger. The film will continue an ongoing line of questioning for Edwards that has featured prominently in her work – ‘why do women create, and what ramifications does the internet have on how women are perceived?’

"That has always been my struggle, to be a sexual person, a sensual person, a thinking person and a creative person. To be a mistress of my own destiny" – Penny Slinger.

This is an intriguing collaboration between an artist who dealt with misogyny during second wave feminism and a designer who is grappling with ongoing issues of how women are seen and treated in the self-reflecting prism that is modern-day internet culture.

Selfies, selfies, selfies. Those words could be heard repeated on the dream-like soundtrack as the central character, played by Margaret Clunie, gets prepared for the day ahead. The film investigates the rituals of getting ready to face the world. As she rides up and down the escalators of the tube and into the National Gallery you are taken on a journey with her, discovering how she sees herself and how other people see her in turn, all trussed up in an Edwards x Slinger shirt. Her journey ends abruptly in the chapel and the audience are also suddenly brought back into the fold of the historic surroundings.