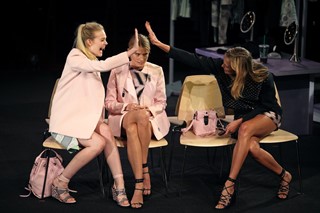 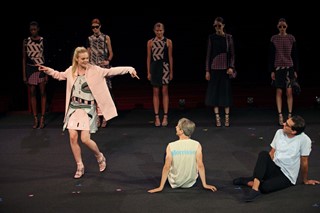 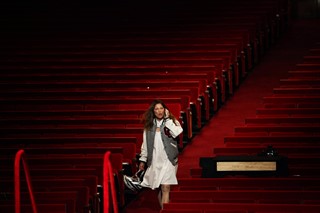 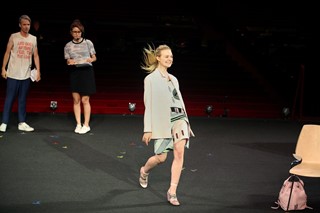 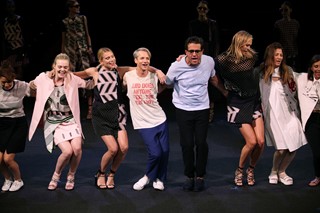 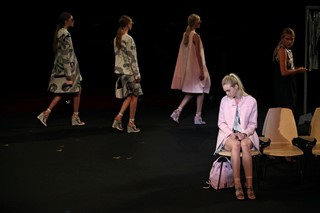 In case you've been living under a rock, last night Opening Ceremony (the label off-shoot of the store founded by Carol Lim and Humberto Leon in 2002) eschewed the runway, and instead hired actor Jonah Hill and director Spike Jonze to put on a one-act play featuring their SS15 collection. We got the exclusive on an interview conducted back when they were still in rehearsals, but now the show – entitled 100% Lost Cotton – is over, what's the verdict? Read on for our report and an exclusive post-show interview with Jonze, Hill, Lim and Leon.

First off – quotes you need to know for Twitter today:

"You can't go around asking people in the fashion world who they are."
"Final isn't final 'til it's final."
"It reeks of fear, this hem."
"Karlie fucking Kloss. Tower over me, bitch!"
"Her legs are making the skirt look horrible!"
"Anyone can make a girl look good but not everyone can make people feel like they look good."

Spike Jonze and Jonah Hill decided to zero-in on the challenge of the grown-up creative: how do you keep the process of making things fun, fun like it was when you used to do it for no money, when you used to dream about it and wish you could be creative full time? For this collection, Humberto and Carol thought back to when they were kids who loved fashion but weren't in fashion. They used to pool hop together and laugh, and of course it's that youthful bond that translated so well into their ultra-successful adult collaboration.

The play was a meta (Carol and Humberto were characters along with Lisa Love, and Karlie Kloss played herself) riff on the fashion pre-show process, from casting to fittings and press previews. In the second half, both the designers and models become disillusioned with the grind and self-important inconsideration in the industry (sorry, industry) and long for when they first discovered the transformative power of fashion in its purity. It was a close-to-home reminder for the audience, and fittingly the finale was a song-and-slapstick-dance rendition of Drake's "Hold On We're Going Home." The play was a living example of the creative symbiosis fashion has within Hollywood, outside of just dresses shipped to actresses to wear with Louboutin heels. Everyone on stage seemed to be there for the fun of it, to share new clothes in a completely new way.

The moral of the story:

1. Quit modelling
2. Find a way to change the attitude and actions of everyone in the fashion industry
3. Focus on the good parts of the job and ignore the bad

This is paraphrasing, but an inspiring piece of advice to hear, especially in the midst of fashion week when it's easy to slip into a helpless mindset. You know the one: "It's too hot, my car is late, I'm tired, it's exhausting, I didn't get a good seat" etc. The play broke free from the traditional runway mode, and seeing clothes take stage in a new format was a reminder of how much work – how many choices – go into what we see. And we choose to be there. And so much of the time, it's worth it. 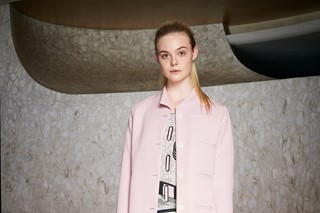 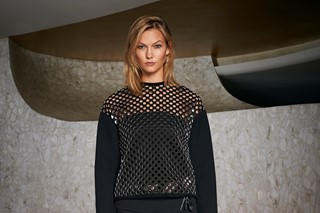 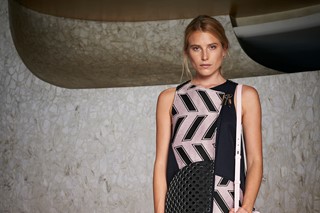 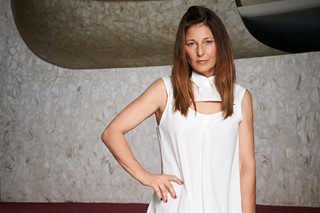 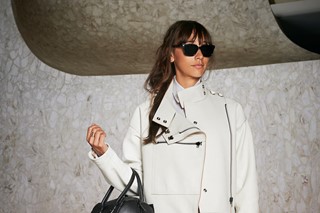 Backstage, after the show

Spike Jonze: No, you wouldn't have. I fixed it. I saved it.

You saved it, thank you so much. You saved everything. Tell me about how you nailed all of the fashion colloquialisms and learned about the structure for things like fittings and show prep?

Spike Jonze: I've been friends with Humberto for years, and I visit him at work, he visits me at work, and I know it from watching my friend go through it doing the fittings, working on the collections. But, in reality, Humberto is one of the least neurotic, insecure people I know which pisses me off to no end.

Humberto Leon: He gets angry.

Spike Jonze: So, then I thought for the story we'd make up a character where he was the biggest neurotic asshole in the world. To get back at him.

Humberto Leon: It's all about revenge.

Spike Jonze: Yes, it's all about revenge.

Humberto, how did you feel watching this extreme version of you on stage?

Humberto Leon: It was surreal but it was kind of amazing because I feel like it was telling a really humanised story, and I sometimes wish I could be that Humberto and that Carol could be that Carol, because they seem like such fun people, and fun characters to be!

Spike Jonze: Yeah tomorrow Humberto's going to start to be–

Carol Lim: We're going to turn into that tomorrow.

I'm going to get a really mean post-show e-mail from Opening Ceremony. I can't wait for that.

Humberto Leon: But really, I felt like Jonah and Spike put such amazing relationships into 30 minutes. It told so much.

Absolutely. And speaking of, I was ready to quit fashion at a certain point. There were really funny highs but also some surprisingly dark lows. Can you talk to me about that meta aspect? Especially when you know you're writing for an audience that lives this.

Spike Jonze: I think it was to play on the humanity of everybody. You know, we all have busy jobs and things we have to do, but under it, everyone also has lives and reality and feelings. We thought that was fun to have that exist in a play in the middle of fashion week.

Carol Lim: Also, we remember growing up and every job that we did, you want to be able to feel that humanity. Even if you were an intern. And now, we do Opening Ceremony and we also do Kenzo, we see so many people, and we love interacting with them because we know what it's like to come to all these things day after day, and you want it to be fun.

Have you guys personally used the advice that Elle's character Julie gives to Dree Hemingway in the play?

Spike Jonze: Yeah, I break things into three – the three options thing – all the time. I don't know, I mean, it's funny because I had all these ideas that I was talking to Humberto and Carol about for the past few months, and when I sat down to write it – I called Jonah and asked him to write it with me – and then it we just riffed on stuff at my house. A lot of that just came out of riffing with each other, which is such a fun way to write with this guy.

Jonah Hill: When the creative process turns into business also – we were thinking a lot about, "Where is the moment or reason for why you got into it?" and "How do you lose that while running a stressful business with deadlines and things?"

And that's relatable for all creative people.

Jonah Hill: Yeah, for me, I don't know anything about the fashion industry except for having these three friends within it –

Carol, Humberto: Yeah! You are now!

Jonah Hill: Well, your her collaboration....

Jonah Hill: I just wanted to know what the people were like who had these jobs!

So what do you think about them now?

Jonah Hill: I thought – a friend of mine who watched the play, he gave us a really nice compliment, which was that he really empathized with Dree's character, the model character. And I think as an actor you can sometimes feel like: "Stand here." You know? Auditioning can be similar to going to a casting. It was just awesome.

Humberto Leon: I feel like it's all somewhat relatable no matter what kind of job you have. The characters are relatable. You know you've been there at one point.

"I think it was to play on the humanity of everybody. You know, we all have busy jobs and things we have to do, but under it, everyone also has lives and reality and feelings." – Spike Jonze

And how did it feel to see a collection incorporated into a script?

Humberto Leon: I think that was one of the most seamless parts of Jonah and Spike's incredibleness – they seamlessly put that in there! I think to all the viewers it seemed so natural and it didn't miss a beat.

Spike Jonze: And the really ironic part was that we had already written the whole story and it was all this heavy shit going on in your life as you get older – when you're not a kid anymore – and then we were like, "Ok, at the end Humberto the character has to talk about what the collection is," so we just called him to ask what the collection was, so we could incorporate some real things into it. And he started telling us about what the collection was. And it was about going swimming in the summer of 1991. And a lot of that stuff was in there! Pre-Internet and innocence and before things got so serious. And me and Jonah looked at each other and were like, "Ok! We have the ending!"

Spike Jonze: And we had no idea what he was making the collection about at the time.

Last question. How long do you think you're going to have Drake stuck in your head?

Spike Jonze: We heard that so many times this week because we rehearsed for the past five days.

Humberto Leon: It is IN our heads.

The soundtrack to Opening Ceremony SS15:

Check out last season's collection for Opening Ceremony below: 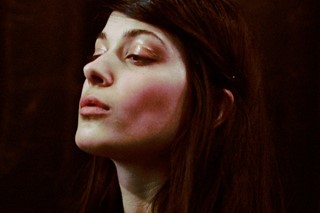 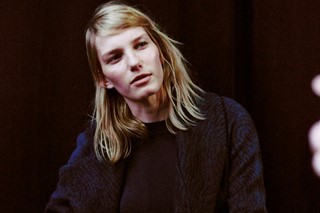 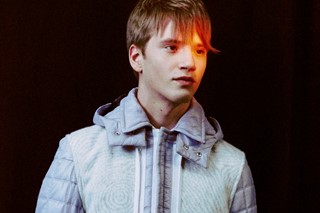 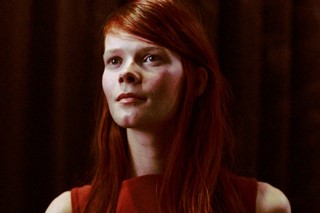 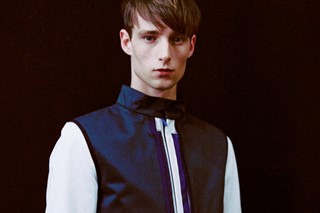 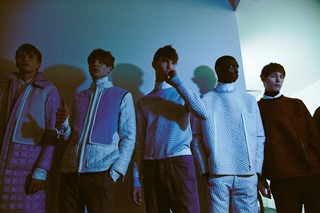