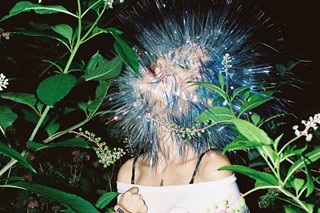 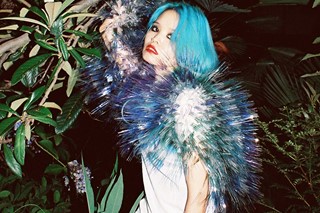 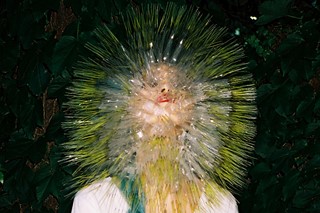 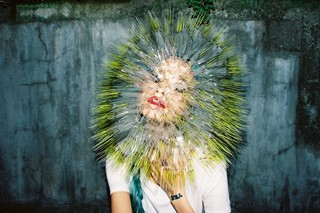 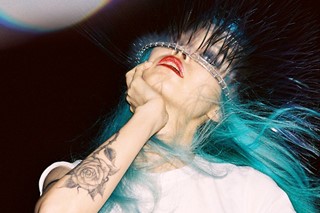 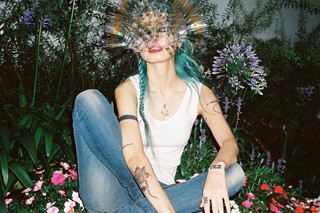 Last summer, Japanese millinery designer Maiko Takeda presented her strikingly original MA collection ‘Atmospheric Reentry’ at London’s Royal Collage of Art. A series of spectacular sculptural headpieces covered in acetate bristles, they soon took the internet by storm. This year, Takeda is a finalist in the accessories division of ITS competition sponsored by YKK. Working under the theme of Lucid Dreams, entrants were asked to create pieces that incorporated one of YKK’s fastenings into a design, and with a top prize of €10,000, it’s a sought-after accolade. Ahead of this weekend – when the winner will be announced at a ceremony in Trieste – we caught up with Takeda to discuss her work and commissioned Dazed photographer Masaaki Sasaki to shoot her collection.

Born into a post-boom Tokyo, Takeda moved to London in 2005 to study – first a BA in jewellery design at Central Saint Martins, followed by a Masters in millinery at the RCA. She credits London’s diversity as a key source of inspiration in her work – “What I love about London is that I get to meet people from all over the world with different cultural backgrounds and perspectives,” she told Dazed. “It makes me realise who I am and frees up my mind, which doesn't often happen in Tokyo, being mostly surrounded by Japanese people.”

Lucid Dreams seems like an ideal brief for the young designer, whose work is surreal, “a world in which the simple will seem complicated and order turns to chaos,” according to her website. She tells us that ‘Atmospheric Reentry’ was designed with a desire to create hats that “blurred boundaries to their surrounding environment,” and was also greatly influenced by the Philip Glass opera Einstein on the Beach, originally directed by Robert Wilson. Having seen a reproduction of the performance at the Barbican Centre in 2012, she admits that it became “a huge inspiration to the collection” – fascinated by its futuristic imagery and sounds, she decided to translate it through her designs.

From February through March this year, ‘Atmospheric Reentry’ was displayed in a solo exhibition in Paris’s Joyce Gallery, an impressive feat for a graduate designer. Building on her original collection, she crafted new glow in the dark pieces especially for the exhibition. Although these – and indeed, all of Takeda’s designs – appear very high tech, they remain artisan, painstakingly crafted by hand. “I wanted to keep something tactile and analog about them,” she explains, “I didn't want to use LED lights or anything with a motor or battery.” Instead, she experimented with pigments and materials that absorb light and then emit it in the dark, and individually applied the pigment to the plastic spikes herself. “The effect is that the final pieces created look somehow digital, but the point was they were all made of tactile and low-tech materials around us,” she says.

The exhibition wasn’t the only thing to come from Takeda’s MA collection: “It was truly encouraging that my collection led me to various great opportunities and collaborations with people I admire and respect,” she says. One such collaboration was with the legendary Björk, who wore several of Takeda’s headpieces whilst performing on her Biophilia tour last summer. A Björk fan, she admits it’s difficult to choose a favourite track, but concedes that “All is Full of Love” probably takes the prize. A 1998 single from the singer’s fourth studio album Homogenic, it’s an appropriate choice considering the video’s own famously futuristic imagery.

For the ITS award, Takeda has found herself going outside of her comfort zone. “The final piece does not look like anything I've created before,” she says, “I had no idea how it would look for weeks!” She admits that it has been “quite a challenging project” and “a process of experimentation,” as incorporating a zip into her design is relatively unfamiliar territory. This experimentation was worth it, though: “it pushed my creativity further and made me explore somewhere I hadn't been.”

After nine years in London, Takeda has since returned to Tokyo, and is currently working at Issey Miyake as an accessories designer. “It was a big change for me,” Takeda admits, “but I am very much enjoying the new life. After being away from Tokyo for a long time it feels like a fresh and new place for me, and I am sure it will influence my next collection somehow.” Finally, we ask her to sum up the aim motivating her work as a designer in one sentence. “To continue to create something that excites and surprises me,” she says. We're sure all eyes will be on her this weekend.