The innovative design duo lift the lid on road tripping in Utah, John Walters and the Denise Huxtable effect

Shane Gabier and Christopher Peters fly the flag for modern eclecticism with their offbeat womenswear label, Creatures of The Wind. From Neo-paganism to Greek mythology, each collection translates diverse, mystical references into clean, innovative silhouettes with disparate textures and playful finishes. Currently based between Chicago and New York, the two take time out of their cross-country schedule to download their thoughts on modern-day America.

RIP maximalism! Gucci strips it back for first show post-Alessandro
Creatures of the Wind AW1411 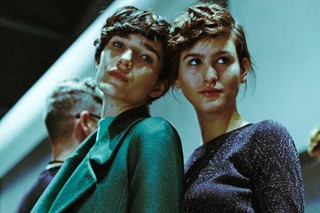 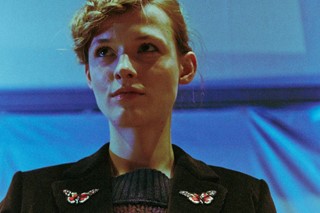 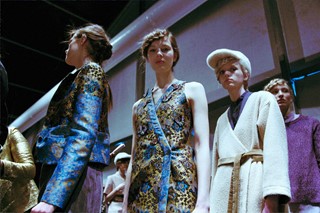 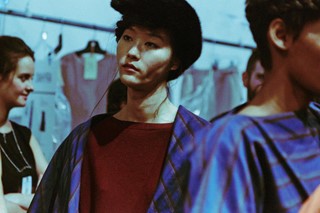 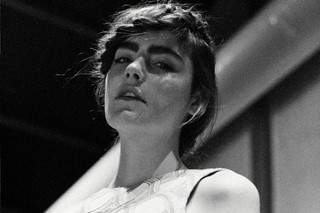 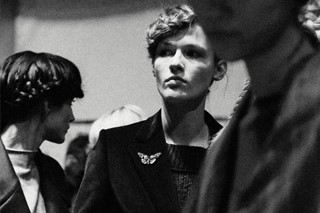 Chris Peters: There are too many things to define in three words, but to sum it up I would say: open, easy…

Shane Gabier: To me, it seems like there are lots of possibilities here, I think that is what attracts people to American still. There is actually so much potential for good here, it’s exciting really.

Shane Gabier: So, let’s go with open, easy and optimistic.

Which living American do you most admire and why?

Shane Gabier: This is kind of boring but I would have to say my mom, because she's the most selfless and caring person I know and I love her.

Shane Gabier: Yeah but I’m sticking with it.

Chris Peters: Mine would be John Waters. I really admire him because he has never wavered from what he wants and he has defined his own world from a very early age. What’s amazing is that he’s actually very political – which is interesting. It’s his way of delivering art.

Shane Gabier: Yeah, he has addressed some really difficult subjects with an intense, direct humour that doesn’t detract from what he’s talking about.

Shane Gabier: We’ve actually met him for the first time at the CFDA Awards this year, he was presenting the ceremony, which was really cool. You meet a lot of famous or high profile people and you’re often disappointed you know, but he was really interesting.

Creatures of the Wind SS1426 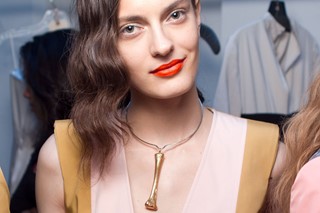 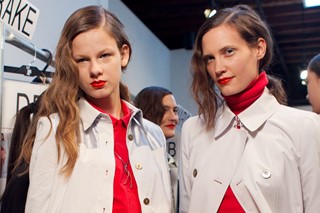 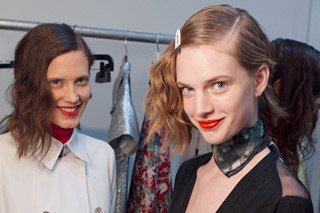 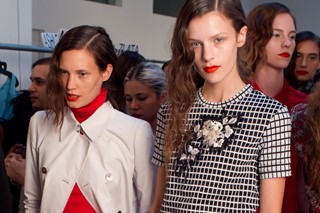 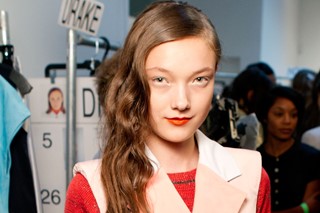 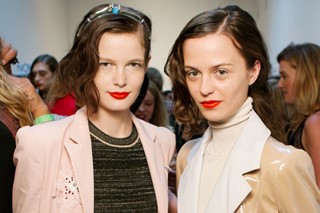 Which living American do you despise and why?

Chris Peters: For us, there’s no real reason to spread hate, unless it’s something that needs to be addressed in particular. That’s just not what we’re about.

Shane Gabier: We hate to be negative just for the sake of it

Chris Peters: We’re all about positivity and positive energy – spreading the good vibes!

Shane Gabier: No one. It should really be faceless. I think that there are so many people that define America today that there isn’t a standard, so I think it’s strange to have one person represent such a vast and diverse country.

Chris Peters: Yeah, there isn’t just a single core of America. It’s a culmination of so many different layers of history and people, so reducing it to one symbolic representation is you know really reductive.

Who gave you your first break? Do you still talk?

Chris Peters: Our friends Josh Ikram Goldman [influential owners of Chicago boutique, Ikram]. When we first decided that we were going to make a proper collection that wasn’t just another project, we showed it to Ikram and that season her and Josh picked it up at their store and then invited all their friends that were editors and buyers to come and see our show, which was amazing. Ikram really rallied for us. We chat all the time and we are still very close, so she’s very important to us. She offers important advice to us all the time about the collection and how to move it forwards and…to me, it’s less about the specific things she has said, and more about the way she manages her life and her business. She takes everything head on.

Shane Gabier: Beyond her living and leading by example, she always pushes us to find the best way to carry our message across without losing our artistic integrity. She is a wonderful person and an incredible inspiration.

When and where are you happiest?

Chris Peters: We can be anywhere, we’re just happy when we're together.

Shane Gabier: It sounds corny, but it’s true. But, I suppose I always feel happy in LA.

Shane Gabier: It’s got such a good vibe. In fact, I feel like LA might be the most American city in the country. It also feels like the ‘ideal’ of modern America, it’s very optimistic and beautiful.

Chris Peters: And the weather is amazing too.

How was the high school experience for you?

Shane Gabier: I went to the tiniest school in the world. I wasn’t ever part of any clique and I haven’t maintained any of those relationships.

Chris Peters: Yeah. High school was pretty whatever for both of us. I had absolutely no friends at all.

Shane Gabier: That’s so not true, come on, I know all your Facebook friends from high school.

Chris Peters: No! I literally didn’t have any. I really didn’t, I spent all my time in the library. Weirdly, I became friends with people from my school after high school when I was in college.

Shane Gabier: I didn’t enjoy it at all.

Chris Peters: It was such a non-time. I don’t even really remember it!

Shane Gabier: You are so dramatic.

Chris Peters: In high school, instead of eating lunch I would go to the library and read. Actually I read endlessly. I really enjoyed the solitude; I was pretty content just being by myself. It was very peaceful.

Shane Gabier: The Outsiders. It’s just very nostalgic for me, it presented an ideal...

Chris Peters: …yeah, it feels very idealized. Mine would be Fast Times at Ridgemont High, another American film and I love it for the same reasons as Shane, it’s an idealized version of what it’s like to be a teenager in America. I mean it’s a romanticised vision.

Shane Gabier: I never aspired to be like those characters, but it’s just great escapism.

What food reminds you of home?

What smell do you associate with the city of your birth?

Chris Peters: Beer. I grew up in New Jersey and where we lived there were lots of breweries near by so everything had this weird rotten bread smell. When I was a baby, my family moved to Ireland and it was weird because that also had that same gross smell. Everywhere I’ve lived smells like gross bread [laughs]. Weirdly I actually love beer now, but I can’t drink it because I’m a celiac. I still drink it though.

Shane Gabier: Mine would be summer beach wind. The town where I was born [Traverse City] on Lake Michigan is a beach community and it smells so good, sort of natural and calm. I really miss that smell actually.

What's the best road trip you've ever been on?

Shane Gabier: Travelling across the country from Chicago through the Badlands through the Salt Flats in Utah, to San Francisco and then Los Angeles. The salt trail in Utah was probably the highlight. It’s just miles and miles of plains covered with an 8-inch layer of white, crackling salt. It takes 30 minutes to drive through and it’s vast and amazing. Honestly, I didn’t even know it existed until I was there – I took lots of photos throughout the trip.

Chris Peters: To be honest I haven’t really done many road trips, but I really want to do the drive to LA from New York, I haven’t had time to do anything like that in forever.

What would make you leave America forever?

Chris Peters: Only if it sunk into the sea.

Shane Gabier: Yeah, I’ve lived a lot of places around the world but I really do love America – it’s just easy. People are super-polite, especially in the mid-West. When we come back from Paris it really makes me realise how easy-going people are here.

What is your favorite American building?

Chris Peters: Actually, we both love the Eames House in Pacific Palisades, California. We went a couple of years ago to see it for the first time.

Shane Gabier: Yeah, it’s just iconic. It’s the perfect space outside and in.

Chris Peters: It somehow feels very natural too because although it’s very modern, it merges with the landscape and is perfect from every angle.

Shane Gabier: Yeah, and the location is beautiful too. It actually overlooks the ocean – it’s so nice, you guys have to go!

Chris Peters: Thriller by Michael Jackson. Actually, I feel like it’s the ultimate album of all time.

Shane Gabier: Yeah, it was one of the first albums I ever bought when I started to become aware of pop music.

Chris Peters: I was living in Ireland when it came out and it always made me think of America when I played it.

Shane Gabier: My favourite track is probably "Beat It".

Chris Peters: Yeah! That’s so good to dance to. Actually I think the whole album is so incredible, I don’t think I could choose just one.

Most overrated US tourist attraction?

Both: The Empire State Building!

Shane Gabier: We have to walk past it a lot because our New York studio is near to there.

Chris Peters: I hate heights and I hate crowds so the whole thing is horrifying to me. I would honestly rather get a tour of the New York sewers.

What is your ultimate American guilty pleasure?

Chris Peters: Yeah, I have nothing else to add to that.

What law would you change or invent?

Both: The Legalization of weed.

When was your last run-in with the cops? What happened?

Chris Peters: Driving from Chicago to northern Michigan in late October, we got pulled over for speeding. After the cop handed us the ticket, he told us to have fun at the Halloween party. We were not in costumes.

Which fictional American do you most identify with?

Shane Gabier: Denise Huxtable from The Cosby Show. She was that cool girl that came from New York and represented the city years before I ever saw it. She was a bit of a hero growing up.

Chris Peters: Oh my god, you still obsess over her now! He’s always trying to put a big hat on everything still and I’m like, errr no!  I think I most identify with Tina Belcher from the cartoon Bob’s Burgers. She’s just a hopeless romantic. I like that she’s so open, I think that’s a really positive message, so yeah, I’m in love with her.

If you lost it all tomorrow, what would you do the day after?

Shane Gabier: Go to northern Michigan and get a job at the local co-op.

Shane Gabier: The same, except hotter.

Chris Peters: I do, but I think it’s altered. Originally, the American Dream was about making it to the top by working really hard. But I don’t think it’s that easy nowadays. You have to be really smart about things. There’s so much more hustle involved now than there ever was before. But, that said, I think it’s still possible. I mean, when we started out, we were working from a basement in Chicago being super broke and now we have a house in Chicago, and a studio in SoHo, New York. We are living proof that it actually exists.

Shane Gabier: It’s good to be really optimistic and have a positive attitude too.

Chris Peters: Yeah, you just have to really work and be smart about it.

Shane Gabier: And be talented.

Chris Peters: Yeah, but I believe that you can become talented if you work hard enough.