Real or fake? Susie Bubble reports on Karl Lagerfeld's latest offering of illusions and romanticism in the new age destination 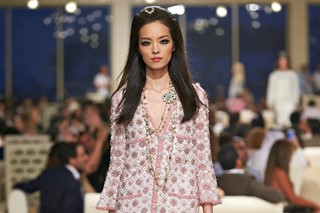 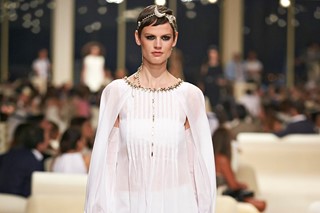 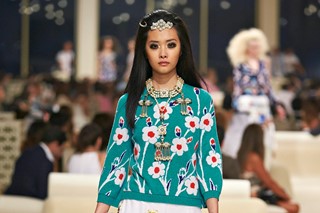 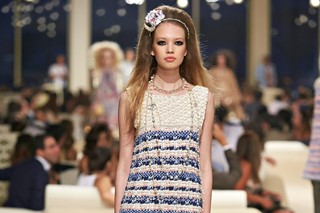 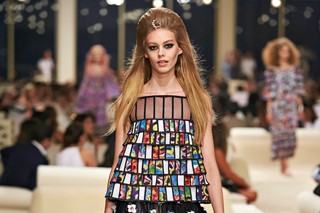 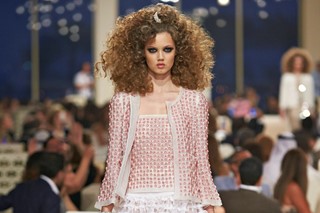 For the second time in a week of far-flung cruise controlled collections, we stepped on a boat. A wooden abra to be exact, which is a traditional wooden boat used to ferry people across the Dubai Creek. That's where tradition just about ends in Dubai as Karl Lagerfeld chose this city to stage Chanel's latest cruise-away shows, because he was "fascinated by this city coming out of the sand and the sea, like Atlantis." Except unlike the allegorical Atlantis, submerged into the sea because it falls out of favour with the gods, Dubai is looking upwards and ahead. The Burj Khalifa, officially the tallest building in the world towers above the Dubai skyline (Lagerfeld pointed out that accolade once belonged to Paris or New York ­­– "the world is always changing"). Skyscrapers, luxury apartments and a theme park dubbed Dubai Land are springing up rapidly in the dusty plains of the desert. Malls are trying to outdo each another with how many brands they can cram under one roof. Some would call it artifice but it's a steel and glass reality here, heightened by the soaring heat. Tilda Swinton, who had been in Dubai for less than 24 hours, put it best as she was "happily discombobulated" on this cruise sojourn.

Lagerfeld looked to Dubai, with all its notions as hyper reality, as a symbol of "modernity" – a word which he emphasised again and again when speaking about the fantastical collection that played out in specially constructed building covered in interlocking double CC's fretwork, on an island that eight weeks ago was an anonymous barren sandbank. Chanel, true to extravagant form, literally pushed the boat all the way out to transport us to a Middle Eastern fantasy of sorts, complete with bedouin tents, shishas and candles embedded into the sand. The collection matched this magical reverie. "I don't know if it's got anything to do with the real Dubai but it's the Dubai of my childhood fantasy – it's Marisa Berenson on a magic carpet," said Swinton. Lagerfeld directly referenced Dubai with a sparkling skyline finale dress on Jamie Bochert but beyond this new age city, other decorative and cultural aspects from this part of the world played into the collection.

“This isn't a hippy collection. This is how women dress today. They're not restricted to clothes from one part of the world or another” – Karl Largerfeld

Whilst condemnation of the harder and horrific lines of the Sharia Law are swirling around elsewhere in the world, here Lagerfeld paid respect to the act of covering up from head to toe, something heeded by the show's Middle Eastern princesses and heiresses in attendance – all dressed up in Chanel, of course. From that one somber note, Lagerfeld proceeded to play with anything from Paul Poiret's Orientalist antics to 70s Ossie Clark vibes in his own dream vision of the Orient. It was a riot of Islamic tile prints replicated from 11th-12th century designs, intricate patchwork florals, billowing harem trousers, accessorised with Aladdin's slippers and bejewelled big back combed hair. The ‘Is it fake/real?’ aspect of Dubai was underlined in the mix of costume and precious jewellery. All of this could only be convincing when rendered with the artisanal finesse that is at Chanel's disposal.

As the sheiks and sheikhas applauded the collection, the immediate thought was that to some extent, this collection played up to the Middle Eastern market with its long layered tunics over trousers, exuberant prints, dainty sandals with lit-up heels (perfect for peeking out from beneath a black burqa) and even a comedic nod to UAE's oil money foundations seen in a gold quilted handbag shaped like a petrol can. Lagerfeld quashed this antiquated thought though.  "This isn't a hippy collection," he said. "I see these clothes on women from all over the world. This is how women dress today. They're not restricted to clothes from one part of the world or another.”