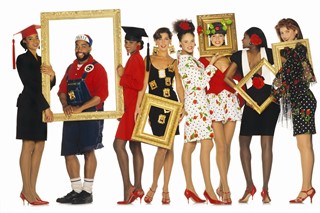 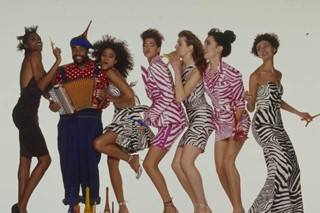 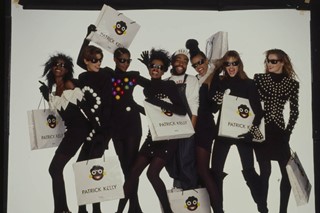 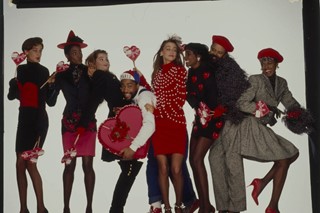 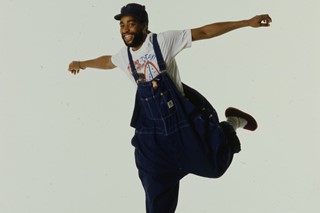 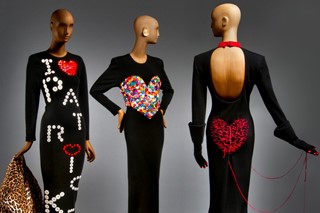 Patrick Kelly's loves: “Pearls and Popcorn”, “Lycra Dresses and Spare-Ribs” and “Families, Especially Grandmothers and Mothers” speak from themselves. For the designer, who is now being celebrated with a new exhibition at the Philadelphia Museum of Art, his flamboyant world was the source of fun – and politically provocative – fashion in 80s Paris. He was the designer that The Supers – Naomi, Iman and Yasmin Le Bon – all wanted to walk for, and the first American (and black person) to be voted into the prestigious Chambre Syndicale (France’s organisation of fashion designers). Quite something for a small-town Missippipi boy.

Kelly's shows were exuberant and over the top – as much a symptom of the swishier catwalks of the ‘80s as his own playfulness. His models twirled to the latest pop music (Michael Jackson’s "Bad" and Mel & Kim’s "Respectable" in one show), making him feel contemporary and fresh, but this exhibition shows the ways in which Kelly was more than just “of-the-mo”. Yes, he was about fun and “a heavy glamour trip”, but his work packed a punch, and was full of cultural and historical curiosity.

“At the black Baptist church on Sunday, the ladies are just as fierce as the ladies at Yves Saint Laurent haute couture shows"

The exhibition’s curator, Dilys Blum, talks of Kelly’s “sly sense of humor, often with political overtones.” He wanted to make wearable clothes that would make people happy, but “at the same time, he subverted not only fashion, but also stereotypes, particularly in regard to race. He played to such assumptions while undermining them. He kept people guessing.” He handed out racist pickaninny dolls for white society ladies to pin to their lapels, designed a watermelon hat to be worn by a black model (the watermelon is an old symbol of racist iconography in the US – Kelly was reclaiming it) and the logo he splashed across his boutique bags was the cartoonish face of a golliwog, an image he was beginning to make his own.

He celebrated women like his grandmother, showing the fashion world that strong strain of southern, sartorial, Sunday best that predominated in the black, church-going community. "There weren't any fashion shows there, but there was fashion," he told People magazine about his hometown, Vicksburg. "At the black Baptist church on Sunday, the ladies are just as fierce as the ladies at Yves Saint Laurent's haute couture shows." When he looked through the magazines his grandmother had given him, he noticed the absence of black women, and when he asked her why, she said: "Nobody has time to design for them." Kelly went on to design for all women. In the “Love List”, he puts “All Women (Fat, Skinny and Between…)”, and name-checks black icons Josephine Baker and Pat Cleveland. His catwalk shows celebrated a diversity of models that is all too rare today.

No wonder he loved the ladies in his life – Kelly had them to thank for his interest in fashion: his mum taught him how to draw; the women he knew added embellishments and flair to their store-bought garments; his grandmother brought glossy magazines back from work and sewed different coloured buttons onto his clothes whenever he lost them, kick-starting his career-long love of buttons on clothes (koumpounaphobics, turn away). Kelly's signature look was the cutesy heart shapes he sewed onto black tube dresses, using bright buttons – a flirty signature that soon became synonymous with his name. Whilst he was keen to prove that he was capable of more than simply this style, he enjoyed cheekily goading critics in a 1989 catwalk show by first bringing out “tweed suits with lace” (to show off his tailoring and range), then deciding “to flood the runway with dresses with buttons on them, so they can think, ‘My God, he’s done it again!’”

The exhibition in Philadelphia is a celebration of all this: as much about racial issues as glamour; as much about tailoring as fun. And all in the form of magenta dyed furs, leopard velour, capes, minks, cashmere, quilted satin and… buttons.

The Patrick Kelly: Runway of Love and Gerlan Jeans Loves Patrick Kelly exhibitions are at the Philadelphia Museum of Art until November 30