Ghesquière appeals to the “collective unconscious” in his Vuitton debut, with seventies suede and perverse leathers 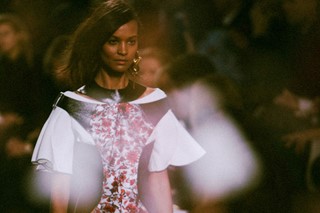 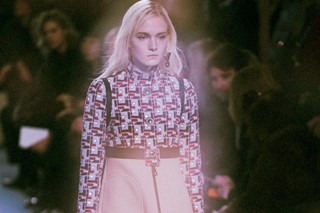 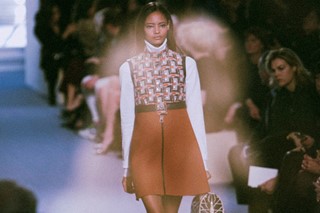 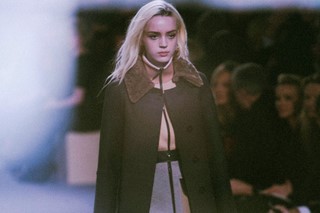 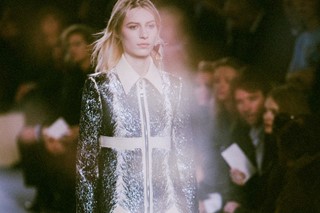 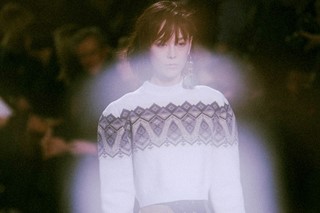 This morning we all knew that we would witness the unfolding of a new era, and that Nicolas Ghesquière’s Louis Vuitton debut would be minimal – but did we really know what to expect? We’ve spent six months fantasising about the possibilities of this collection, so as each look made it’s way down the runway it was almost difficult to take in. It was fresh, new and unlike anything we imagined. Perhaps Ghesquière said it best, this was a “familiar wardrobe that appeals to the collective unconscious” – it wasn’t about creating a spectacle, it was about re-wiring our brains to accept a new Vuitton.

Stark. Gone were the extreme and spectacular sets we’ve come to expect from a Louis Vuitton show. Instead, Ghesquière stripped everything back. The catwalk had been transformed into a minimal maze, and metallic blinds surrounded the entire space. As the show began, the shutters were lifted – we were exposed under harsh sunlight. It was like being part of a sci-fi experiment.

Absent of grand, sweeping concepts, or the futuristic, architectural silhouettes that defined his time at Balenciaga, Ghesquière’s Louis Vuitton creeps up on you unexpectedly with a mastery of subtle seventies codes. All entirely wearable and desirable, tan leathers were layered with dark suedes and muted carpet pattern florals, underpinned with cream roll necks. Incredible, beaded embroidery grew like fine feathers over a cream coat worn by Julia Nobis. This was a Louis Vuitton luxury that whispers.

In the past, Ghesquière has approached the female form with restraint. Today at Louis Vuitton, he gave us leather, PVC and lots of perversion. Nude leather dresses were zipped front of the body, just under the bust, whilst navy PVC trousers were paired with classic riding jackets.

For one of the most anticipated shows of the season, for a house known for lavish spectacle, Nicolas Ghesquière chose to welcome his guests with a personal, typewritten note. A quiet, touching gesture that sent shivers down our spines as we read it.

“Today is a new day. A big day. You are about to witness my first fashion show for Louis Vuitton. Words cannot express exactly how I am feeling at this moment… Above all, immense joy at being here, in the knowledge that my stylistic expression is at one with the Louis Vuitton philosophy. The proud legacy. The inspiring history that looks to the future and to the world. The quest for authenticity and innovation. The desire for timelessness. Does not every designer ultimately seek to create something timeless? I salute the work of  Marc Jacobs, whose legacy I wholeheartedly hope to honour. And I thank you for being here to share this moment with me. Thanks to all of you who have helped me to tell this new story and who make Louis Vuitton what it is, and especially to those who work with me. Thanks to everyone who is here on this day, this morning. Right now.”