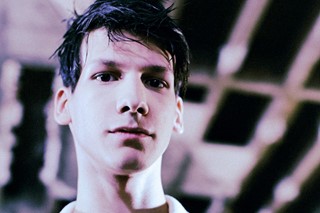 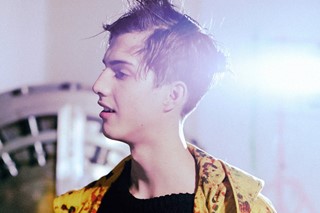 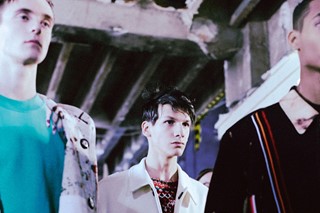 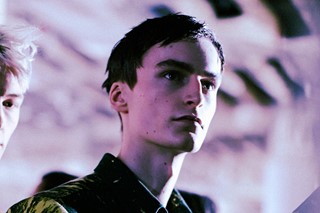 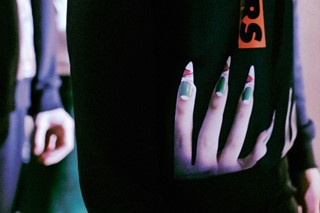 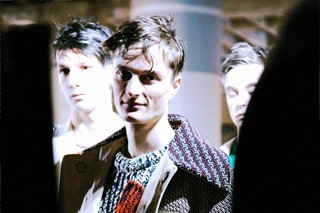 This wasn't just another collaboration – Simons's and Ruby's vision verged on the cult and elevated our obsessive teenager years beyond the confines of both art and fashion.

Our visual landscape might be changing, but this collection was a throw back to teenage years spent sewing band patches on our dirty clothes. An entire generation might be playing out their lives in the virtual world – but Simons and Ruby proved that Tumblr shrines have nothing on real life iconography. This was homemade, heartfelt and verged on the cult.

Simons and Ruby approached garments like canvases – manipulating, defacing and marking out their territory in order to create something new. The feeling of obsessive youth came out in the addition of patches and text scrawled on the top and on the inside of the collection. Bomber jackets were covered with orange stripes and galactic stickers reminiscent of the collage scraps in Ruby’s BC/Bleach Collage series, whilst jumpers featured the words ‘father’ and stretched out hands. An acid yellow and orange dye splattered coat harked back to the pair’s capsule collaboration for Dior Haute Couture AW12, and the bleach canvas walls Ruby created for the Raf Simons Tokyo store.

“I sewed on patches as a teenager…Pink Floyd, Kraftwerk, Sonic Youth. I still have them, at my mum’s.”

“The pace of fashion is a shock to me, art has a slower pace. But we were both nervous, we’ve been texting all day. I have to say though, every month we worked on it, it got stronger and stronger. After maybe the fourth month, we realised we were meant to do this.”

Watch our exclusive behind the scenes video of Raf Simons and Sterling Ruby going head to head on their punk obsessions here.