A cult of crocodile soldiers in deconstructed suits, feather headdresses and snappy shoes 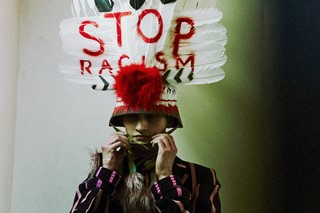 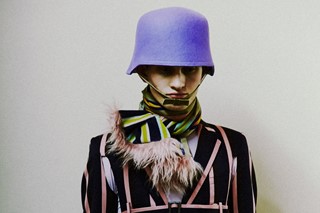 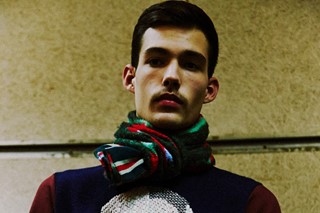 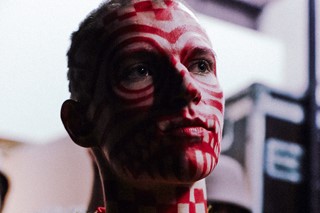 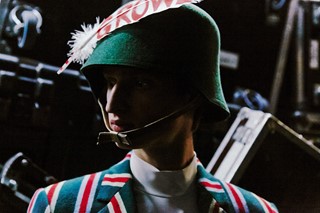 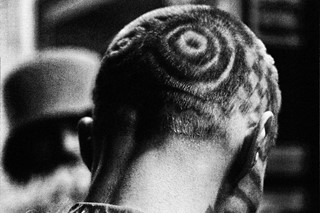 'Crossed crocodiles growl': Van Beirendonck proves his bark is as loud as his bite as anti-racism slogans adorn headpieces made by Stephen Jones.

A cult of street cast models in felt soldier bucket hats, straps tight under the chin. Lace up crocodile trainers came with white teeth on the sole, and googley eyes at the tongue. Some models had red face markings, created by make up artist Inge Grognard.

A final series of shirts – in trance stripe and pure white – had tufts of ‘hair’ shaved into the surface, creating an outline of a crocodile face print with circles and lines. Lycra leggings and body suits in bright red and blue came with white teeth up the side of the leg, worn under shorts and shirts.

The deconstructed suits in trippy colour pairings: a blazer with cape like wings, hybrid stripe and leather jackets with an attached striped hoop like a necklace resting around the neck, and a jacket made up of a complex series of straps, bibs, and lapels.

Feather headdresses were daubed with ‘Stop Racism’ in red paint, while Van Beirendonck’s face held showgoers in a stare from the front of a sweater – complete with knit blue eyes, and wool beard. “For Those About To Funk”, by Mooro signaled the finale.