We still want to believe: a look at unresolved sexual tension dressed in oversized coats and nineties leisurewear 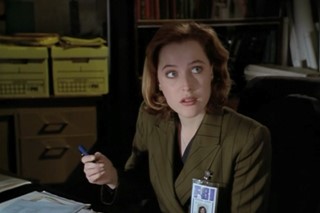 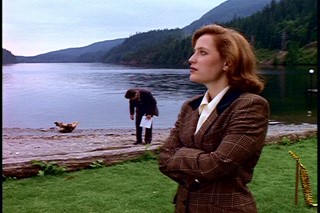 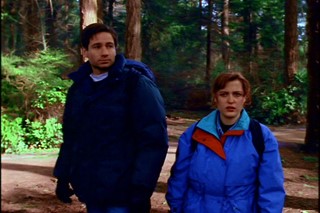 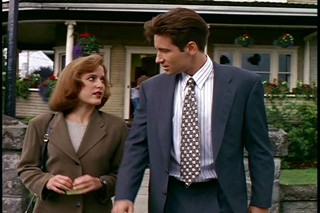 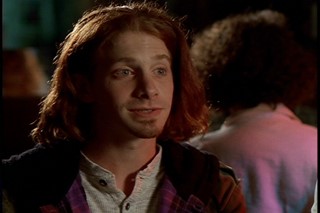 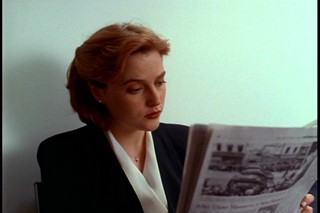 1993 was the year we got the first episode of The X-Files, which saw Agent Dana Scully being appointed to babysit Spooky Mulder and the duo investigating their first alien abduction. The pilot spawned millions of Mulder/Scully shippers and endless fanfic material, and this year, die-hard X-philes finally got the 10th season they’ve always been waiting for, although only in comic book format.

While the show brought us epic things like Leonard – the monster foetus that lived inside his alcoholic sideshow-performer brother Lenny and came out at night to eat his way inside a new brother – the inbred Peacock family, Skinner’s never-ending shoulders and Seth Green in full Seattle stoner grunge mode, the show’s wardrobe also deserves a major shout-out. Overseen in the first seasons by costume designer Larry S. Wells, who worked on The X-Files from 1993 until his death in 1995, the wardrobe made amazing use of muted colours and classic hero coat silhouettes, which added to the atmospheric and dimly lit sets, often only illuminated by Scully’s fiery red hair.

Before the end part of the series when Scully got all streamlined nineties in Calvin Klein and Emporio Armani and Mulder’s grey suits got upgraded to expensive black ones, the wardrobe on The X-Files was much more fun in all its anti-glam, FBI-appropriate glory. Half of the time Scully’s conservative suits looked like she’d been shopping in a weird wartime fashion warp, but her shoulder-padded wardrobe perfectly served to underline her rational, sensible character. The seemingly endless supply of beige trouser suits and ribbed taupe t-shirts were sort of the logical sartorial manifestation of a pragmatic woman who owned the eye-roll and began most of her sentences with “Mulder, you’re not suggesting that…” or “There has to be a scientific explanation for…”

Mulder was all about a relaxed and relatively unobtrusive suit, which matched his floppy good-guy nineties hair, as well as some really bad ties that added to his goofy character. (Mulder’s colour-blind, though, so he’s excused.) On the other hand, Alex Krycek’s sharp suits, tiny, neat tie knots and slick Scott Disick hair spelt all kinds of trouble. (TRUST NO ONE.) We also got some excellent off-duty fashion in those early seasons, like Mulder getting his dad jeans and marl t-shirt action on, a teal green cardigan-wearing Scully giving Queequeg a bath with a bottle of ‘Die, Flea, Die!’ (RIP QUEEQUEG), and any episode that took them to a vast, dark forest which meant they immediately dressed in massive puffer jackets and bad denim.

While we were waiting for Mulder and Scully to just kiss already, they were busy constantly dropping their guns, calling each other going “Where are you?” and wearing a steady succession of long, oversize coats. Scully was definitely MaxMara’s most loyal cashmere coat customer during those first seasons, while Mulder mostly relied on his trusty trench coat. The coats were sort of the key wardrobe leitmotif of the early X-Files because nothing says creepy eeriness quite like a billowing coat. It’s what you want to wear when you’re hanging out in cemeteries and stalking down seemingly endless corridors in secret government facilities. Sometimes they even wore matching ones, like in Bad Blood, also known as The Best X-Files Episode Ever.

Even though she never really got to drive any of the rental cars and got abducted on a regular basis, Scully was always in the driver’s seat and no amount of unflattering suits could take away from her hotness. Chris Carter has often mentioned that Scully was inspired by Clarice Starling in Silence of the Lambs, and during the first season, Scully wore a lot of nipped-in tweed hunting jackets reminiscent of Jodie Foster’s wardrobe, which many fans pointed out was kind of appropriate considering she’d been appointed to trail Fox Mulder’s every move and kill his supernatural cases. (Or maybe she wore them because everyone from Kelly Taylor to Audrey Horne wore tweed jackets at that point, but whatever. The Fox reason works much better.)

At the end of the first season, Gillian Anderson got pregnant, and since practical nineties Agent Scully wasn’t one for accessorising apart from her gold cross necklace and trusty flashlight, she didn’t have the luxury of employing today’s Strategically Placed Oversize Handbag used by pregnant TV actresses everywhere. So instead, wardrobe decided to make heavy use of those roomy white lab coats and autopsy scrubs during the second season and upsize all of Scully’s already generously sized clothes. Why they decided to not only expand her outfits in width but also in length – to the point where her suit jackets reached down to her knees – remains a mystery. But, you know, the truth is out there.