Rei Kawakubo authors another fashion moment, riffing on the psychedelic infinity of tailoring 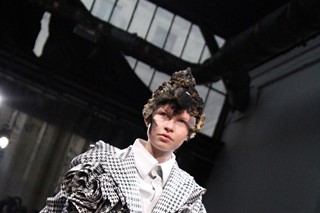 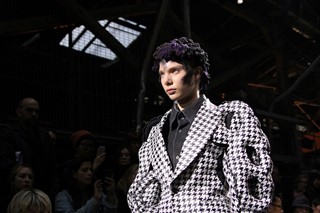 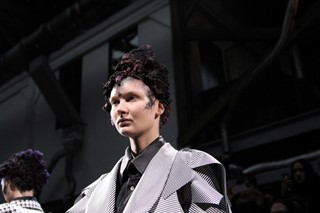 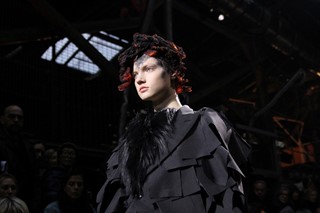 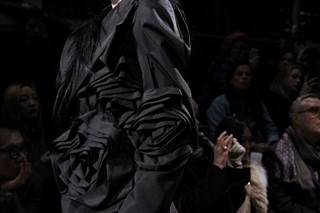 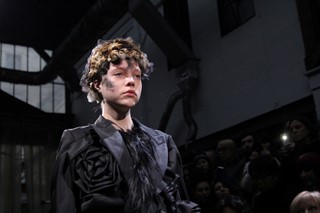 Masculine and the feminine. Familiar and the unfamiliar. Decoration and structure. These were all at play in Rei Kawakubo’s latest collection. The masculine and feminine contrast is especially one that can be problematic if reduced to a simplistic play on proportions or gender bending mash-ups. However, in Kawakubo’s display of “the infinity of tailoring” as she called it, if ever there was a peak in that play of contrast, this must be it. Suits, if you can call them that, in Prince of Wales check, City Boy pinstripes, black and white op-art stripes, houndstooth and solid black were cut with in-build decoration. Giant swirls, lush rosettes and layers of post-it square were not tacked on with whimsical fancy but integrated with technical pattern cutting. They looked like optical illusions as you stared deep at the construction, losing yourself in the folds, drapes, tucks and reams of fabric. The sleeves were especially emphasised as they often ballooned into giant leg-of-mutton shapes or bunched up into padded squiggles and loops. The mainstream vision of suits still needs warping and Kawakubo, whilst not the first to do so, has certainly done it with expert flair. Padding bodies out to great proportions, so much so that the models had to precariously turn to the side, so as to not to bump into each other, felt like a call to arms (quite literally in this case) – to confront the world with shape and construction, just as Kawakubo asked us to do so with her influential flatforms two seasons ago.

When the final five ensembles came out, rendered in the most mind-blowing psychedelic prints, created by the artist Dan Michiels, there was another take away message. Life isn’t black and white. Actually there’s a whole lot more in between and even more on the horizon. To go with Michiels’ mind-at-work, tripped-out psychedelia, let’s tell ourselves to get radical. Kawakubo knows a thing or two about being rad.