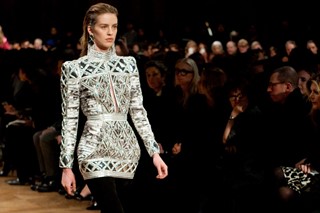 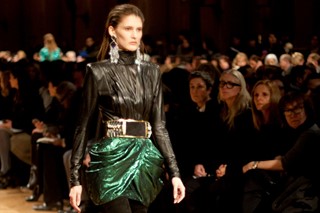 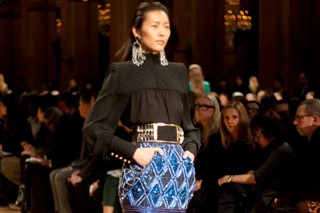 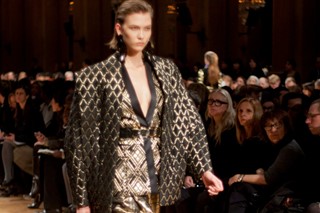 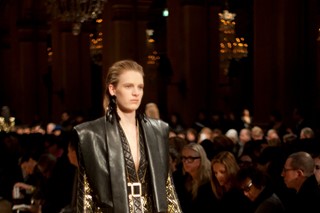 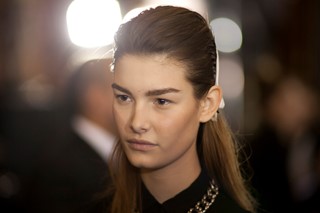 'What we need today' is a question that designers in Paris are asking right now, and for a few, the gloom and doom of the current economic state of affairs is weighing heavy. The youthful Olivier Rousteing, though, is escaping to a bygone past to get to a poptastic future. He spoke of couturiers like Paul Poiret, Christian Lacroix and of course, Pierre Balmain, who created their own universes, escaping in their own way to fight their socio-economic crises with colour, vibrancy, and joyfulness. "I wanted to take back Paris," declared Rousteing, comparing himself with those designers who fought economic downturns with the language of fashion.

So it is that Rousteing reveled in the spirit of those late 70s designers who took Paris by storm. The inflections of camped-up and amped-up "Oriental Exotica," evident in all the past couturier greats, turned up in Rousteing's Aladdin belted-in harem trousers, draped miniskirts, statement jackets and the angular don't-fuck-with-me shoulders, that have become such a signature of the house. Beneath the glitz and glam of the metallic jewel tones and bling-a-bling-bling ostentation, there's a serious dedication on Rousteing's part to the possibilities of a French couture atelier – strips of leather woven into an enlarged check tweed, and stiffened hot pink leather quilted and encrusted with jewels are no easy feats. As Led Zeppelin roared around the L’Hôtel de Ville show venue, so did Rousteing’s unstoppable positive energy.