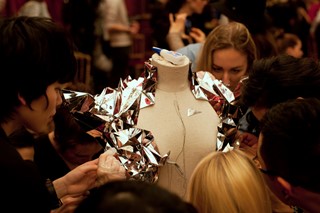 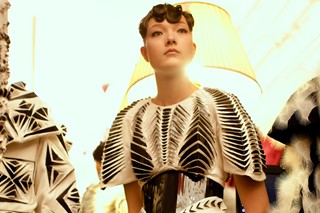 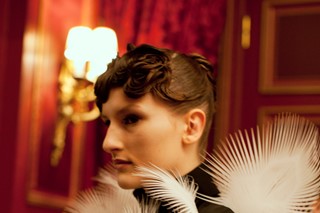 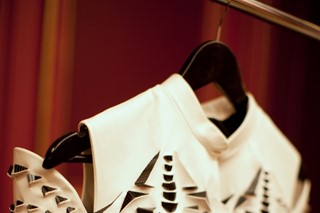 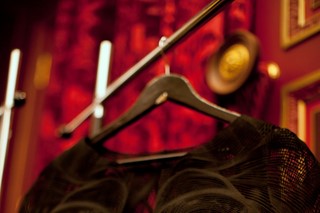 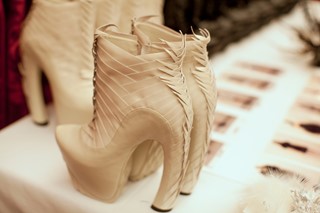 Interview feature taken from the February Issue of Dazed & Confused:

With collections that spring from complex corners of medicine, biology and the digital world, Iris van Herpen is one of fashion’s most inquisitive minds. Since graduating from the ArtEZ institute in Arnhem in 2006 and founding her label in 2007, the Dutch designer has been exploring her advanced ideas with the help of scientists, architects and 3D printing. Her collections, shown during haute couture, fuse centuries-old artisan skills with techniques that have more in common with science fiction.

Crafted with equal measures of fragility and armour-like strength, van Herpen’s sculptural pieces resemble intricate oversized fossil shapes or skeletal structures that have been transferred into a futuristic virtual gaming world. And now, following last year’s solo exhibition at the Groninger Museum in the Netherlands and several custom-made dresses for Björk, van Herpen is to add ready-to-wear to her offerings.

How are you approaching your move into ready-to-wear?
Iris Van Herpen: It’s really an extension of couture, translated into pieces for daily wear. I’m taking elements from previous collaborations. It’s more about functionality and durability, and I’m doing a lot of research into materials that will remain beautiful. I want to try to get the womenswear almost as timeless as the couture. I like couture’s idea of buying something you can wear for years rather than a season.

What does couture mean to you?
Iris Van Herpen: Couture is the laboratory where I can explore new ways of working, new techniques and new materials. I try to collaborate with people from different disciplines to move things forward. There are no limitations in the amount of hours you spend on couture or the research you do, and when I collaborate with scientists the processes can take a year or even longer. And for couture that’s possible.

If you hadn’t become a designer, do you think you would have been a scientist?
Iris Van Herpen: Ha! Well, I don’t think I have the knowledge for it. Some of the people I work with are true geniuses and I’m not. But I certainly have the love and curiosity for it. Growing up, I did classical ballet and I always thought that was going to be my career. But in high school it all changed and I wanted to study at the art academy. If I look back, I know I needed the materiality. Dance would be too abstract. You can create something but it’s gone once you stop dancing. That’s what I like about my collections – they start their own life after I’ve created them.

The starting points for your collections tend to be quite abstract, though, like neurological conditions and electromagnetic rays.
Iris Van Herpen: I think the things in life that aren’t visible or totally clear are the most interesting. There are so many things around us that we use and know, but that we’re also not really aware of. Those are the nicest things to work on because I can at least try to make them visible with my imagination. I can’t work from a visible reference. If it’s already there I can’t fantasise about it.

Would you say your take on fashion is quite philosophical?
Iris Van Herpen: I think it is a bit. I think a lot about life and the way we live and make decisions. When I collaborate with an artist and architect like Philip Beesley, our sessions are more about philosophy than the practical side of what we’re going to do, and I think that’s visualised in the collections. The thing is, it’s so abstract I could never tell you exactly what that philosophy is.

A lot of your pieces have a fantasy element, almost like they’re still growing into new shapes.
Iris Van Herpen: I like the interaction between the three-dimensionality of the body and the three-dimensionality around the body. A couture garment has its own way of moving, and I like it to interact with the body and not just follow it. It becomes two personalities in one – the dress and the woman. Every woman has her own way of moving, and that’s something I keep in mind when I design. I don’t just design the dress but its movement.

Your SS11 dress with splashes of water sculpted around it in mid-air really nailed tHose ideas of space and movement. How did you make it?
Iris Van Herpen: It’s a type of acrylic made especially for me that stays transparent after you heat it up. You heat it with hot-air guns and then transform the shapes with metal pliers. It has its own mind and you can never have full control over it. But I really like that. You almost have a relationship with it. I’m doing a project in March with SHOWstudio where I will show how it’s made.

What attracted you to 3D printing?
Iris Van Herpen: Working with handcrafted techniques or a sewing machine gives you a lot of possibilities but also a lot of restrictions. 3D printing is an entirely different language. The complexity and detailing of it almost resembles old historic crafts. It lets me think in total three-dimensionality, instead of first imagining something in 3D, then drawing it on paper in 2D and then creating it for the body in 3D again. For me, it’s a dream. Printer-wise, there are limitations in terms of size and flexibility, but I’m collaborating with two companies who have managed to create a flexible 3D printer. I’ll be showing some flexible 3D prints for spring/summer 2013 couture. It’s a really big step forward, because you suddenly have actual clothes. In the future, it might even fill the gap between haute couture and ready- to-wear. Everyone can have their body scans on their computer and order any clothes exactly in their size with one push of a button.

What will that do to the designer?
Iris Van Herpen: It would change the way designers work, but I don’t think it would make them irrelevant. I mean, people still want to see movies. They just download them. With clothes, it’s about materiality, but that’s where the 3D printer comes in. You could just order a file and print it out. I can imagine you would have files that were hacked, so you’d get a free dress instead of buying it.

Like the fashion version of illegal downloading?
Iris Van Herpen: Yeah. And then you wear the dress and it falls apart after one week because there was something wrong with the file!

People tend to mention ‘futurism’ a lot in relation to your work. How do you feel about that word?
Iris Van Herpen: There’s some futurism in what I do. I’m super curious about everything that’s not quite possible yet, which is why I collaborate with scientists and architects. But I’m really into old, forgotten crafts techniques, which I then combine with new materials and techniques. So all the history is in there, maybe more so than the future. And you can’t build a future unless you’re aware of history.

What do you do to get away from everything?
Iris Van Herpen: I spend time with my boyfriend. I read a lot. And if I have some free time in another country then I like to skydive. I don’t think it’s beautiful enough here in the Netherlands, you need a clear sky. Here, it’s always overcast or raining. Skydiving is the most special feeling you can have. It’s a reset for your body and mind when you land. It’s like you’re born again and you can start over.

Check back later for our coverage of Iris Van Herpen's couture SS13 show.