The world's first 3D printing photobooth is coming out in Japan. How should you dress for your insta-sculpture? 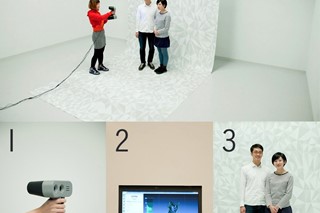 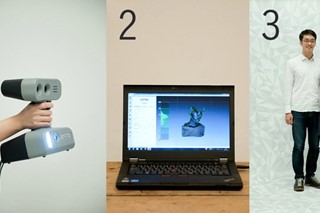 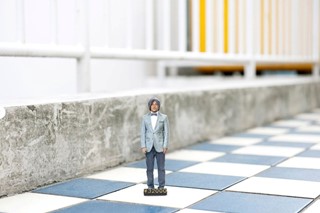 Veronica So, musician with TEETH!!! New York-based publisher of L_A_N and fulltime futurist looks at the ways fashion is being flung into the digital world under her Blog The Fashionable Futurist.

We’ve come a long way in producing printed impressions of our fashionable selves- from the daguerreotype to purikura machines. This week in Tokyo, Japan’s first 3D photo booth will give people a chance have their entire bodies scanned and made into 3D-printed figurines using rapid prototyping technology. Rapid prototyping enables the replication 3D objects, distinctive in its ability to seamlessly generate precise and complex sculptural forms. The technology has been used in the past few years for both creative and scientific projects, such as Jorge Lopes Dos Santos’s ultrasound scans of deformed fetuses for the sole purpose of maternal physical assimilation and in the creation of the otherworldly, computer-generated dresses by Dutch fashion designer Iris Van Herpen.

The 3D photobooth project, called Omote 3D Shashin Kan opens at a pop-up shop called EYE OF GYRE in Harajuku from November 24 until January 14, 2013. People with reservations can go have their portrait taken- or rather, scanned head to toe by a technician with a data-collecting 3D scanner.  Subjects stand very still for 15 minutes while the machine captures all the minute details of their pose and costume, then the data is uploaded to produce a CAD that accurately maps out the dimensions of the sitter- from their hair, color to clothing texture. However, the 3D camera used best captures solid surface planes and bold details, so any movement, light-reflecting or intricate materials may turn up confusing, unstable and unusable data. So when planning an outfit for optimal 3D scanning results, it is best to think of wearing clothes typically designed for and worn by internet avatars. The data dimensions come in three sizes: S (10cm), M (15cm) and L (20cm) and are “printed” by a 3D color printer into a miniature figurine. Prices range from 21,000 yen, 32,000 yen, to 42,000 yen respectively, with a chance of getting a group discount if you pose as a team.

The idea directly appeals to Japanese hobbyists and collectors- from the group of schoolgirls taking their friendship glamour shots to the next level, a collectibles-obsessed otaku wearing their most elaborate cosplay outfit, or dolls of a wife and child for a family man to display proudly on his desk at work. Instead of a four-shot photobooth strip, these miniature portrait figurines take photographic likeness to the next tangible, handheld level. One can only hope that in the next couple of months, stylish sitters can work with the strengths of the technology and manage to dress creatively for the best results, such as wearing their most voluminous Comme des Garcon skirts or suited up in post-apocalyptic plugsuits- as is befitting of a fantastic future.