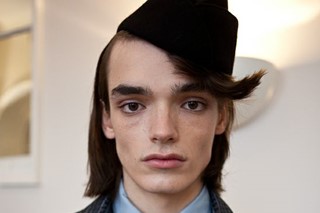 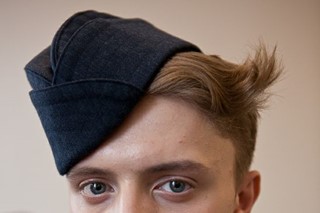 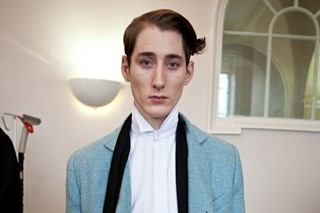 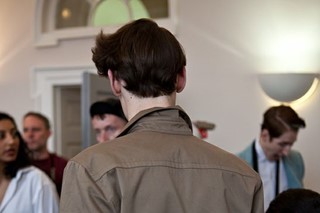 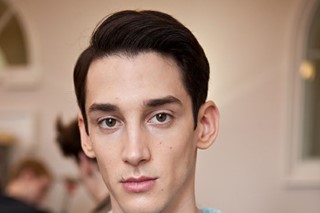 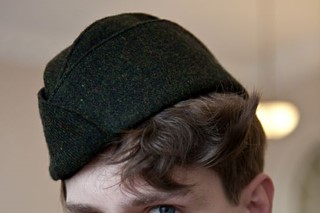 There are few things better than British mid-20th century for a young native designer to reference. The epoch - before, during and just after the Second World War - offers drama, pain, joy, love, hate and… uniforms! Theres' something authoritative and decisive about dressing models in army-inspired clothes, a feeling of being in charge and in control of one's own destiny. There were such influences in Lou Dalton's Autumn Winter collection, but the designer had also intertwined something no man or woman can control, namely love.

"I'm a romantic at heart and find wartime love stories to be the sweetest, this collection really reflects that. I used a combination of heavy military mixed in with soft and luxurious knitwear to really get the point across", Dalton said after the show.

In Dalton's thick tweed jackets and heavy wool coats, there were elements of tender loving care, showing not just references to a 1940s army officer's on-duty uniform, but also pieces taken straight out of the wardrobe of a young soldier on leave, spending a romantic weekend in the country side with a loved one. We saw hand knit cables and quilted garments mixed with more rough and tough biker jackets, workwear and checked shirts.

I'm a romantic at heart and find wartime love stories to be the sweetest, this collection really reflects that. I used a combination of heavy military mixed in with soft and luxurious knitwear to really get the point across

Styled with Dr Martens boots, the cropped wool trousers and RAF-style jackets were topped off with army side caps, convincing any doubters of Dalton's reference points. But these uniforms were mixed red tweed jackets - the colour of love! - and turquoise suits and knits. This enabled Dalton to bring out stonewashed denim, creating a powerful colour combination that nicely contrasted with the dark palette of a squadron leader in Her Majesty's Royal Air Force.

Shirts on shirts and coats over coats confirmed a running theme throughout London Fashion Week, both for menswear and womenswear, but in few other shows did that sartorial detail make so much sense as in Dalton's love letter to a bygone era. But rest assured, these Autumn Winter threads, with the perfectly structured suit fabric towards the end of the show as standout pieces, will work as well for a lovesick soldier in 2012 as it did in 1942.