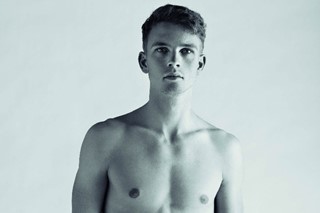 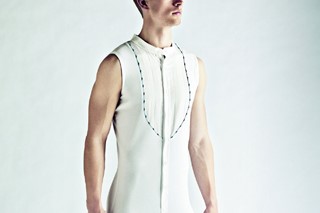 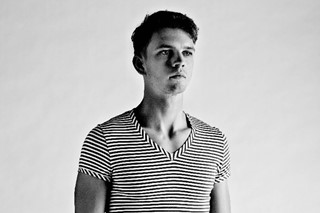 For the young French designer, Alexis Mabille his story may have started with a noeud papillon – that’s bowtie to you – firstly as personal accoutrement then festooned on his menswear, womenswear and couture collections, but he’s now branching out to something a little less visible but no less potent. Specifically to men’s underwear. For his S/S12 showing, that was remarkable for an unforced air of sensuality that left some in the front row blushing – the models wearing vests with the legend “ALEXIS ME DESHABILLE" ("Alexis undresses me") whipped off their tops and trousers to unveil his new underwear collection, done in collaboration with French underwear brand, HOM.

Since my adolescence I’ve loved underwear but many times I’ve found it too aggressively sexual or too classic. The idea was for me to do something very personal, crossing with my idea of menswear

And while some of his menswear collections may err on the side of fanciful, HOM by Alexis Mabille is pleasingly sexy and straightforward, yet with Mabille’s distinctive sense of humour and charm. Featuring well cut boxers, briefs, vests and robes, the range is strongly evocative of a summer spent by the seaside. Dazed met with Mabille and Regine Weimar, CEO of HOM in Paris just days after the showing of his AW12 couture collection.

Dazed Digital: How did the collaboration with HOM come about?
Alexis Mabille: By Facebook – very modern! I was just reacting to a new advertising campaign they did -  I thought it was nice. In fact I met with Regine and started to chat about underwear. Before I was doing underwear in my collection – as a fashion item to say that I love it. But it was a very expensive product with low distribution and I was a bit frustrated at the time because there were people waiting for it but could not get it. I started to explain that to Regine that I wanted to do a full collection with good distribution so people could get it.

DD: You did a cake for Angelina and a collaboration with Laduree. What considerations do you make when doing collaborations?
Alexis Mabille: It happens very naturally – sometimes when you meet people sometimes, you have a fun idea. I met the art director of Laduree and we wanted to do a bowtie cake. It’s nice to show an idea can be out of the ordinary.  When you work on a collaboration, it has to be playful and natural. When I did things with Angelina, it’s because I held my show there and for me it’s like my second home because I’m there all the time. I even did my birthday there sometime ago – so it’s part of my family.
Regine Weimar: for us it’s the same way. We don’t necessarily go out looking for designers to work with HOM. We liked very much what Alexis did and we thought it would be good idea to show Alexis’ view on the subject. The idea was to do something really different and have an exchange on how men’s underwear can evolve.

DD: When one thinks of designer underwear, you immediately think of iconic Calvin Klein ads. Did these images play into your fascination with underwear?
Alexis Mabille: No for me, it’s very personal. Since my adolescence I’ve loved underwear but many times I’ve found it too aggressively sexual or too classic. The idea was for me to do something very personal, crossing with my idea of menswear and at the same time, it’s more quiet than my ready to wear. You could be very fashionable but you don’t want to wear lace underwear! For me, it’s very important – it’s like Collection Zero. It’s about new classics and new basics.

DD: What are the considerations to take into account when designing underwear?
Alexis Mabille: We worked a lot on the cut and the material and the comfort of the pieces so that it’s nice on the model and nice to on a guy from the street. It’s about a new elegance in underwear with a twist of sensuality. I tried all of it to make sure it’s working!

DD: When you design menswear, do you start with yourself?
Alexis Mabille: At the beginning yes but it could be for different types of people.  It could be for all ages – there are no limits. In the same view, I think it’s nice to get different types of people. In the underwear market – there’s the sports market, the classic market but there is something in the middle that doesn’t exist and I wanted to be there.

DD: The S/S12 collection seemed more straightforward than some of your previous work.
Alexis Mabille: Every time for my menswear, the winter season is more aggressive – to use old, classic material in a more aggressive way. And for summer I’m more into the lightness of summer. I love the strict attitude of summer – mixing casualwear and costume. For summer, I’m more into the neo-bourgeois chic guy and for winter, I prefer this English aggressiveness mixed with classics.

DD: A lot of people were struck by how sensual the summer showing was.
Alexis Mabille: Sensual, playful and fun. That’s why when we did the casting we chose more natural boys. Some of them were skinny, some had a bit of hair, some had not perfect body. It was nice to get some charm because the collection was all about charm and elegance.

DD: What is your personal favourite from the collection? Are you a boxers or briefs man?
Alexis Mabille: I loved the chevron print. I’m more in briefs and I wear boxers more as pyjamas! (laughs) I love the idea of having all the pieces of pyjamas as ready to wear. It’ s specifically for a younger customer to get something attractive and fashionable. Underwear for the young generation is like an accessory.

DD: Is this going to be an ongoing collaboration with HOM?
Alexis Mabille: It’s constructed as timeless – there are no seasons. It has to interact with the public – it’s nice to see how people react with it. Of course I would love to continue with it.

RIP hypebeasts: Miu Miu is now the hottest brand in the world
FashionIncoming