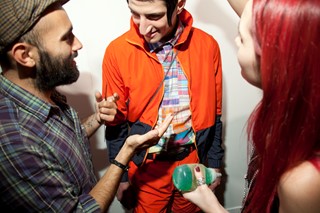 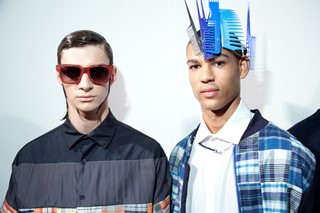 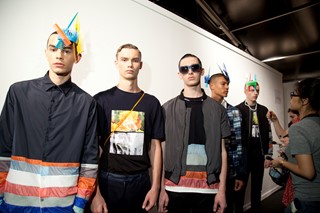 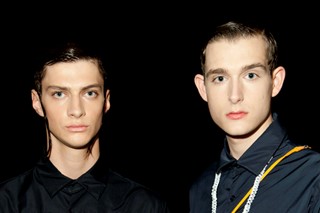 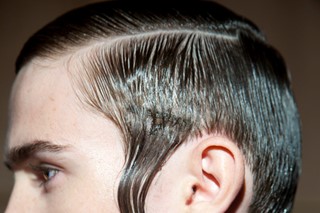 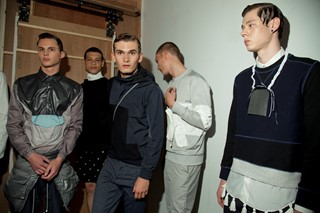 It was a quieter and more pared down collection, well in his terms anyway, from the master of sportswear inspired fashion forward menswear, Christopher Shannon, for Spring Summer 11. While all of Christopher's trademarks and signatures were still there to be see, collages of pockets and patches, tassels, contrasting colours and patterns, overall the colour palette was muted compared to last season. Mainly greys, navy, blacks and whites, the collection was a strong example of how to design effectively for men. A collection that had strong nods in the direction of the casual but with added extras that make you stand out, without feeling like your showing off, or out.

Opening with colour blocked shirts in shades of contrasting grey, teamed with navy and white petite polka dot shorts, the first looks were slick and desirable. Fishtail macs in thin, almost transparent nylon, came up next showing the layers of garments underneath. Patchwork detail sweatshirts with applied pockets and a foldaway hood came up next followed by crisp white shirts tasseling shirts and shorts. Pops of colour started to come in here and there and were seen in bright orange bags slung over the mainly darker looks. That same orange appeared as shorts and as a nylon mac. Then came in the patterning, with a full chequerboard patchwork bomber jacket and another with contrasting sleeves.

Dazed Digital: Where did the tasseling come from? Was it a follow on from last season?
Christopher Shannon: Yeah we wanted to do something that took the texture idea that we were working with last season and brought it through. I was really surprised but that sold really well for us last season, that wasn't the only reason, but it was something that surprised us. I thought it was a little bit trixy and quite full on but it sold out of one store in a couple of days.

DD: You kept the colours quite minimal and pared down. Why was that?
Christopher Shannon: Well actually we started off really bright but then because there was so much going on we wanted to quieten it down a little bit. I really didn't want to go down that 'Dad on holiday' route.

DD: For Spring Summer it was dark...
Christopher Shannon: I'm alright with that. I don't wear many colours anyway.

DD: Where did the patchwork nylon pockets come from on the sweatshirts?
Christopher Shannon: We have always done all over print but I started to find that a bit of a bind, and also it contributes to a certain look but I think that can be a bit too young in some ways. We are also going to do a jersey line so it was kind of about defining print in a different way for us.