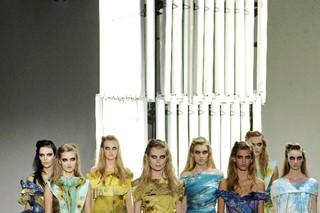 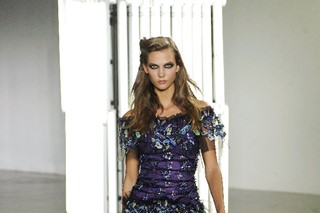 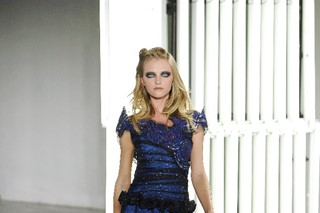 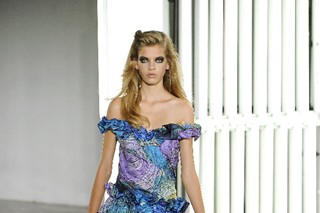 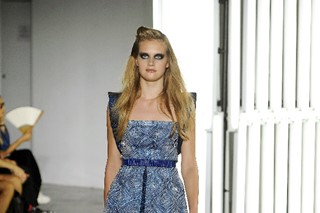 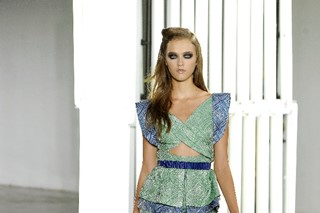 The paintings of doomed Dutch artist, Vincent Van Gogh, in particular ‘Almond Branches’, ‘Sunflowers’ and ‘Starry Night’ may have decorated the rooms of countless teenagers over the decades, inescapable as say a poster of ‘Betty Blue’ - a universal cultural signifier of teenage angst. But they formed the unlikely basis of the enchanting S/S12 collection of the Mulleavy sisters of Rodarte. Like Miuccia Prada, the girls have a knack for taking something so obvious as to be almost mundane and banal and provide a fresh way of looking at it.

So Van Gogh’s thick brushstrokes were pixelated, abstracted and blurred to become prints as intriguing as a half-remembered memory. The built up super constructed shapes they have been developing over the last two seasons were intact, but there was also a languid fluidity in layered chiffon dresses and tiered tulle empire gowns. At first glance, this was their most deceptively straightforward collection yet – a simple set of glowing fluorescent tubes designed by Bureau De Betak and a soundtrack of wistful pop songs by Mazzy Star and Morrissey. But at closer glance, things got deeper and darker; quite literally in the closing section of darkly majestic evening gowns accented with tiers of silk moth hand embroidery and Swarovski crystals. Despite the A-list front row of Beyonce, Taylor Swift and the Fanning sisters; the real star of the show was once again, the beautifully topsy turvy world of the Mulleavys themselves.

Dazed Digital: The collection seemed an evolution of ideas you’ve been working on for the last two seasons
Laura Mulleavy: The key starting point was I said to Kate that I only wanted to do a bright colour palette for the entire show and then we thought about how we were going to do it. Then we started watching Disney’s ‘Sleeping Beauty’ and seeing the amazing colours they invented for that animation. Then we thought, well who uses these colours? Then we were led into the very beautiful world of Van Gogh.
Kate Mulleavy: I was fascinated when I heard that Walt Disney had patented a paint that glowed on film which gave it an amazing glowing effect. Watching the movie over and over reminded me of those amazing nocturnal colours and then things started to explode.

DD: His painting is such an iconic image that the danger is that you could do something banal and obvious with it...
Kate Mulleavy: I think that’s always the best starting point. I was looking at a portrait of his mother that’s done in an acid green and to this day, there’s nothing more shocking than looking at it. With banality you become accustomed to it so it’s interesting then to try and relook at it. The way we did it wasn’t just to take the painting and make it into something, we actually took the painting and took it apart, pixelated it and worked with it. So you can’t just look at it in a basic way, but you have to think about it in a more complex way which changes what happens.

DD: I think this is the first show of yours I’ve seen that’s used pop songs...
Kate Mulleavy: We always knew we were going to use the Morrissey song, it’s what we had in our minds. I feel it was inevitable we would use a Mazzy Star tune eventually, coming from California.
Laura Mulleavy: We chose songs that had an uplifting feel but with an underlying dark tone.

DD: And where was the underlying darkness this season?
Kate Mulleavy: I feel the surprise is this idea of nocturnal colour – a vibrant colour that comes out at night. I feel when people talk about darkness, it’s always one-dimensional. For me it’s never about that – it’s when something is more complicated and there’s always multiple layers. The critic Gregory Krum once said of your work, “I don't think it has ever been Rodarte's goal to make a pretty dress that wears well.” Has your idea of beauty changed over the years?
Kate Mulleavy: I just like the idea of making something that’s beautiful. I’ve always felt that way but in all honesty I think there’s complicated ways of doing that and my idea of beauty is always shifting.

DD: If you could sum up an emotion running through the collection, what would that be?
Laura Mulleavy: It’s like when I look at Van Gogh’s paintings - I see a melancholy within the dead sunflowers in the vase. There’s something very vibrant and there’s also a melancholy. And that’s the fascinating thing about it.