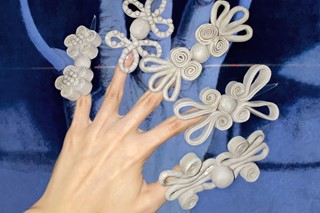 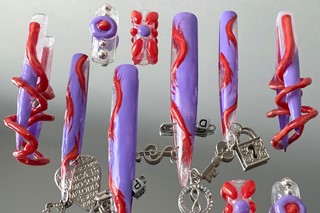 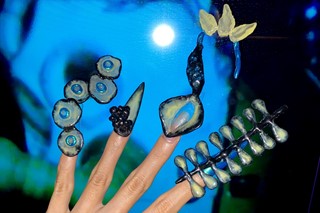 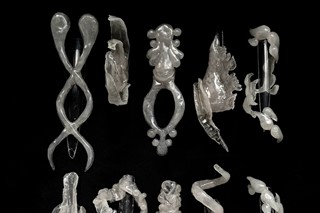 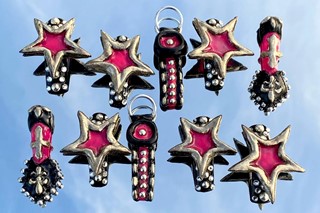 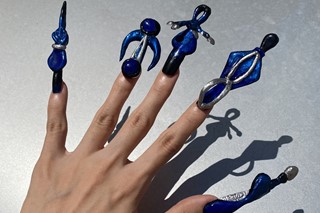 The Dazed Beauty Community is our ever-expanding encyclopaedia of creatives and emerging talent from across the world who are redefining the way we think about beauty. From supermodels to digital artists to make-up prodigies transforming themselves in their bedrooms, these are the beauty influencers of tomorrow who embody everything Dazed Beauty is about. Discover them here.

Cyshimi’s first beauty memory is the unusually long little fingernail of their Chinese grandfather – a tradition among Chinese men that harks back to the country’s dynastic days. “It’s funny to see where I am now”, says Cyshimi. What seemed strange to them 20 years ago now echoes throughout their work: maximalist nail sculptures that extend out from the fingers in unexpected forms.

Fingernails have a rich history of power and resistance, and for the 24-year-old interdisciplinary artist they are a symbol of identity and empowerment – an expression of resistance against hegemonic beauty standards. They are also both a canvas and carrier of their work exploring themes of ancestry, identity, beauty and the body.

“[Nails] can easily be connected to an idea of a subversive beauty, but more than that, it’s connected with body and performance,” they say. “Nails expose how our body can expand, having them is like having a superbody… That’s why I name them as performative sculptures: sculptures that are part of an alive and expressive body, and so the nails perform with it.”

Growing up in São Paulo, Cyshimi was the first in their Taiwanese Chinese family to be born in Brazil. The experience was often alienating and their art became a way to work through their traumas. “Growing up as a non-white child it makes you notice you’re different from a very young age,” they say. “This really made me see fashion and beauty as a sort of escape.” For Cyshimi, who is non-binary, nails also are a way to celebrate the “plurality and diversity” of bodies. “Where oftentimes it’s imagined that there’s one possible way of living, there are actually infinite others.”

This sense of joyful multifacetedness radiates from their work. Take ‘Training Wear’, which sees nail sculpture grow into an entire costume. Or ‘Treasure Knots’, which is part collage, part nail art, part ceramics. And then there’s ‘Jungle Walker’, a biomorphic sculpture that transforms the hands of the wearer, before morphing from 3D work to 2D image, then into crypto-art via NFT. It’s work that exists across materials, IRL and online, in the memory of the past and the technology of tomorrow.

Below, we chat to Cyshimi about vanity, Chinese beauty heroes, and their predictions for the future.

How would you describe your job?

Cyshimi: I make nail sculptures that reinterpret narratives, remodel objects and create a world of their own. A lot of the nails that I create are a result of a transdisciplinary path including sculpture, digital art, installation and performance. But beyond defying aesthetics, my work revolves around ancestry, identity, beauty and body. For me, nails are ‘Performative Sculptures’, they are not just a static object, but a sculpture that shapes the performativity of bodies.

Why do you do it?

Cyshimi: When I think about nails, it can easily be connected to an idea of a subversive beauty, but more than that it’s connected with body and performance. Nails expose how our body can expand; having them is like having a superbody, it’s a strong symbol of power. That’s why I call them performative sculptures; sculptures that are part of an alive and expressive body and so, the nails perform with it. I mould the acrylic endlessly to create a sculpture and it moulds me back, it hits and rebounds, making you change your life in regards to things and people around you.

They also represent a clash of norms, while questioning a hegemonic beauty standard and instigating everyone around them. A lot of my work seeks to reveal that historically, nails are a strong symbol of resistance, empowerment and identity. They defy normative concepts of beauty and ways of life, generating a strong sense of community and collectivity. Having them is also a way of celebrating plurality and diversity of bodies, where oftentimes it’s imagined one possible way of living, when there are actually infinite others.

How did you get into it?

Cyshimi: I’ve always had a strong relationship with vanity since I was a teenager. Since that time, I started to grow my natural nails really, really long. I found it incredible how our body could grow something naturally so fantastic and how I felt with them – more powerful and unique. Then, throughout all the crafts that I started to learn, working in the fashion and art industry, I jumped into nail sculpting, a passion that reunited many concepts and mediums I have run into before.

What’s been your career highlight so far?

Cyshimi: Having my work exhibited in the Super Rare gallery in New York, my feature on Instagram and having my nails in a Comme des Garçons campaign.

Can you talk us through some of your favourite looks and how you created them?

Cyshimi: ‘Jungle Walker’ – I made this very inspired by natural textures and it is one of my favourite colour palettes. Then I took a picture with a forest image on a TV screen behind the nails, which then turned into one of my signature ways of photographing. This is also my first piece minted as NFT, so I’m really proud of it.

‘Training Wear’ – A garment with my first nail sets stamped into a dress, which was used in a performance. I think my work goes beyond the nail sculpture itself but also tries to bring it to other mediums.

‘Treasure Knots’ made out of ceramics sculpted in the format of Chinese knots, with the postcard ‘Fingernails of a High-Class Chinamen’ behind on a TV screen.

Which fictional character do you most relate to and why?

Cyshimi: I get profoundly touched when I see Vanilla Sky; how David Aames (Tom Cruise) totally loses his sense of self when his face is disfigured, the way it changes his life and relationships around him.

Who is your beauty icon?

Cyshimi: Gong Li in the Curse of the Golden Flower, when she makes a reference to the empress Cixi with her nail guards, her whole look is totally immaculate and it was the first time I saw nail guards in action.

When do you feel most beautiful?

Cyshimi: Whenever I feel like losing myself from my current self and then stepping up and transforming. The glow-up moment.

Are you optimistic about the future?

Cyshimi: As a Brazilian person from the global south living in political chaos, beyond thinking about long-term optimism I live one day at a time.

What is the future of beauty?

Cyshimi: The future is whatever we build now. For me, beauty is trans, race inclusive, limitless and will also be in the metaverse. There are also a few creators transforming their beauty art into NFTs and I believe this is just going to increase.