Essential reading for everyone except Rihanna

Next Monday is the first Monday in May which, as we all know by now, means that it is time for the Met Gala. This year the theme is In America: An Anthology of Fashion, the second instalment of its two-part exhibition on American fashion. The dress code? “Gilded glamour”, darlings.

Guests attending the ball will attempt to embody the opulence, glitz and grandeur of Gilded Age New York. Asking them to embody the dichotomy of the time is probably a little too much for a group of people who famously don’t understand the assignment and could barely muster up the effort to wear Rei Kawakubo designs when the theme was… Rei Kawakubo.

The Gilded Age refers to the period between the 1870s and the turn of the century when the United States saw major economic growth and prosperity. In New York, this growth created the rise of a new social hierarchy and the city’s first socialites (it also sparked the founding of Vogue in 1893). Those at the very top echelon of society flaunted their wealth and excess with ostentatious displays of vanity through their outfits and at parties like the high-profile Vanderbilt ball in 1883.

This prosperity, however, didn’t benefit everyone and the wealth inequality during this time deepened. The term gilded – meaning to coat a surface with gold – was first used to describe this period by Mark Twain, and perfectly encapsulates how the affluence among the rich obscured the hardships and poverty of the lower classes.

This, intentionally or not, makes Gilded Glamour the perfect theme for 2022. While the glitterati walks the red carpet next Monday in couture gowns and sit at tables bought for $300,000, much of the rest of the world is currently experiencing a cost of living crisis, an energy crisis, a rent crisis, massive wealth disparity, and war.

So what can we expect from the celebrities attending the ball? Gilded Age fashion was one of excess. Thanks to innovations making fabric faster and cheaper to produce, clothing at this time often featured many textiles, combining satin, silk, velvet and lace in deep jewel tones with lavish embellishments. Bustles were so elongated, there were jokes that they should be big enough to host an entire tea service. Hats were so adorned with feathers that in 1895 the Audubon Society was founded in an effort to protect birds from the millinery trade.

And the beauty? Have a look in the gallery below to see some of the hair and make-up looks guests might be inspired by. 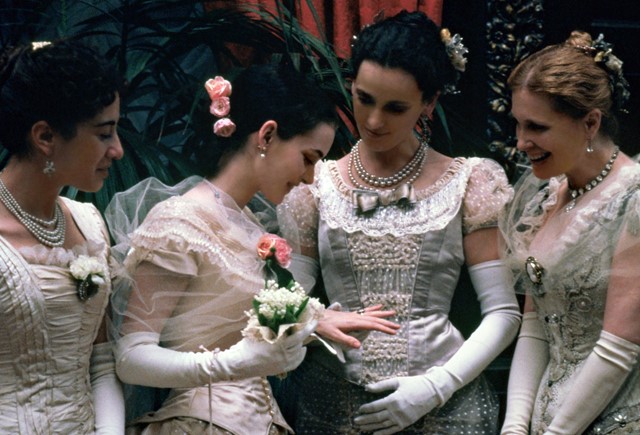 The Age of Innocence

On the night, gala attendees will no doubt be split between literal interpretations of the era’s styles and more loose representations of glittering, gilded glamour. Those more literally-minded can look to Martin Scorsese’s 1993 film The Age of Innocence. Based on Edith Warton’s novel, the story is set in 1870s New York high society and follows the romantic entanglements of Newland Archer.

Guests can take inspiration for their beauty looks from this description of the ethereal Countess Olenska and load up on the highlighter: “Everything about her shimmered and glimmered softly, as if her dress had been woven out of candle-beams, and she carried her head high, like a pretty woman challenging a roomful of rivals.” 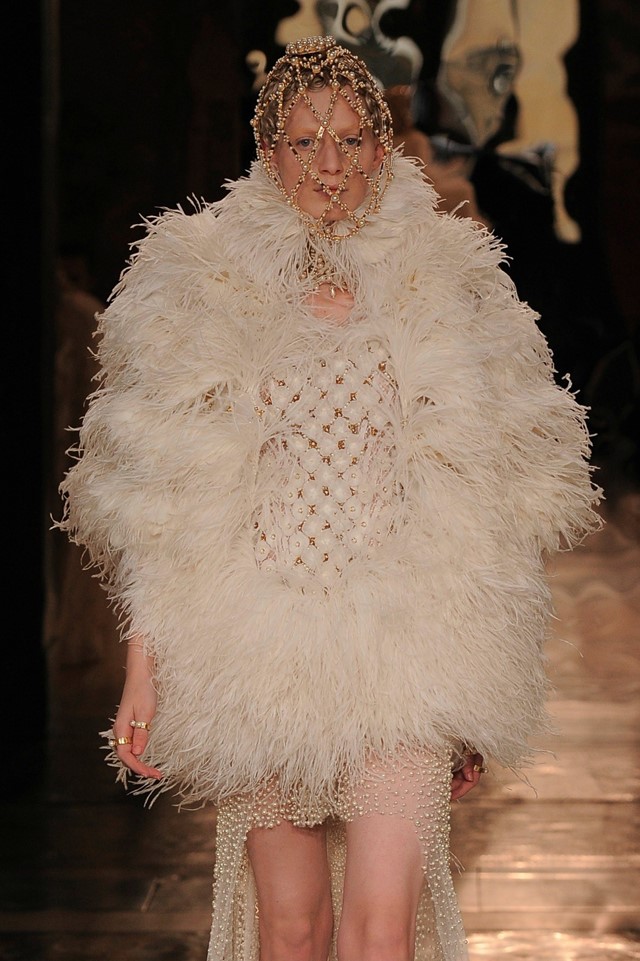 The guests could also interpret the dress code by wearing this golden headpiece from Alexander McQueen’s F/W13 collection.

Inspired by the excesses of Catholicism, several of the models in the show walked the runway with face-framing pearl and jewel-encrusted head cages in silvers and golds. Afterall, what metaphor encapsulates celebrities more perfectly than the bird in the gilded cage? 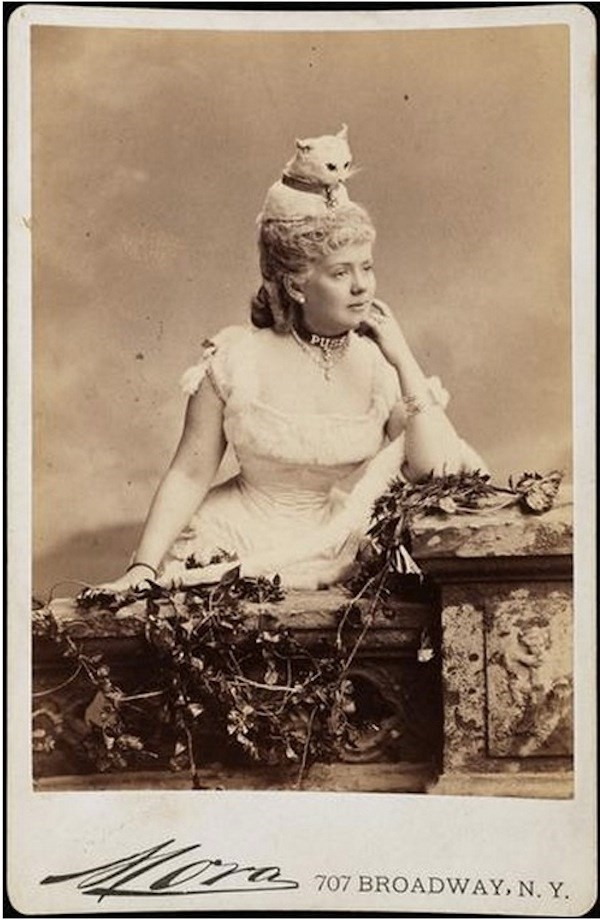 In a 1941 issue of Vogue, Frank Crowninshield wrote that the Vanderbilt ball was “the most extravagant affair of its kind which America had ever seen.” Hosted by Alva Vanderbilt, the ball was rumoured to have cost roughly $7 million in today’s currency and hosted hundreds of New York’s high society in their most outrageous fancy dress costumes.

Met Gala attendees can take inspiration from the outfit worn by Miss Kate Fearing Strong – who was described by Henry James as “youthful and precocious” – which referenced her nickname “Puss” and featured a large taxidermied cat head as a hairstyle and seven cat tails sewn onto the skirt. 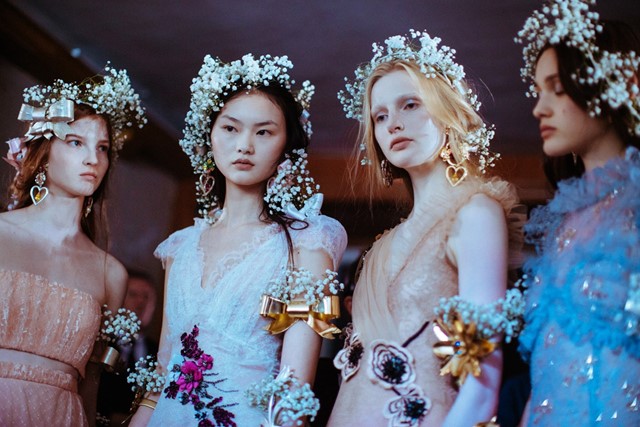 Rodarte’s SS18 show was a modern day take on the Gilded Age’s love of embellishments. Piles of fresh baby’s breath were loaded into the hair of the models, each of whom were also adorned with barrettes, wreaths, satin ribbons, bows and petals.

The dresses themselves were dreamy creations of exquisite tulle, lace and chiffon.

Guests wanting to go down the high fashion road need only to look to Dior’s Haute Couture show from Fall 2005. The collection featured several fin-de-siècle-inspired looks in ghostly sheer greys with matching make-up. Pair your silver smokey eye with a dark grey lip and a neck-load of pearls. 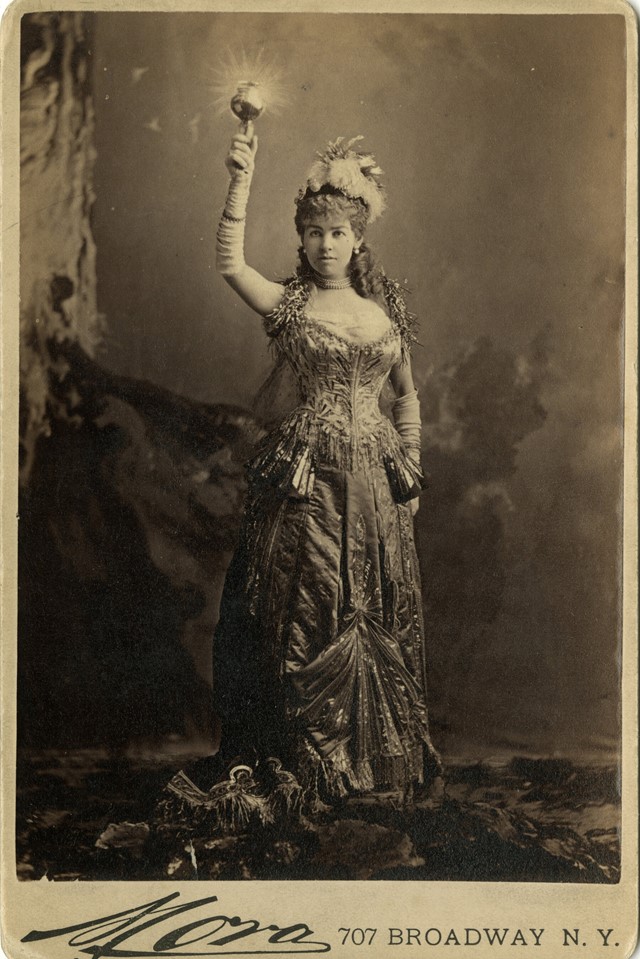 “Since the announcement that it would take place,” wrote the New York Times of the Vanderbilt ball, “scarcely anything else has been talked about.” Along with Miss Smith’s feline look, other costumes at the ball included Alva Vanderbilt’s Venetian princess outfit complete with live doves; Alva’s sister in-law who showed up as a hornet; and Mrs Ada Smith who wore a look covered in peacock feathers.

Alice Claypoole Vanderbilt was arguably the star of the show – she came dressed as the (newly-invented) light bulb in a satin gown trimmed with diamonds with a diamond headpiece. 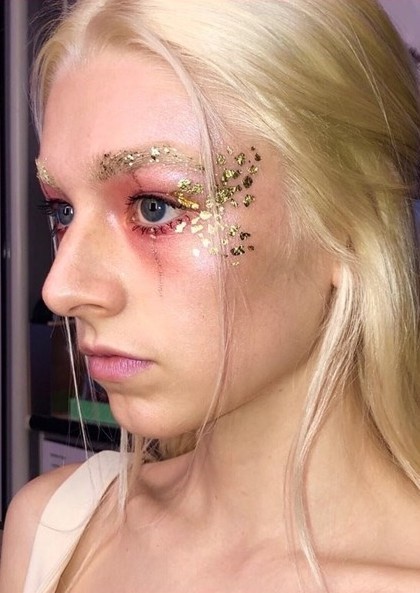 Running with the gilded theme, we’d be surprised if there isn’t at least a bit of gold leaf incorporated into the beauty looks at the ball. For a subtle look, guests can take inspiration from the ethereal look Jules wore in the Euphoria Halloween episode as Juliet which featured glitter brows and gold foils around her temples.

“These gold flakes really took me on a ride,” Doniella Davy wrote about the look. “Don’t laugh or breathe too hard while holding the container nearby or the flakes will take flight.”