Out of all the weird, wonderful and downright absurd audios doing the rounds on TikTok, you wouldn’t think that a recording of Democratic congresswoman Alexandria Ocasio-Cortez calling out Representative Yoho for his sexist remarks would have such an impact. At least, at surface level that is. Dig a little deeper into how the app functions though – beyond the dance challenges and thirst traps – and it’s a completely different story, one of rampant political discourse from both right and left of the spectrum, passionate Presidential endorsement, and educational videos on everything from historic cultural appropriation to the gender pay gap. In fact, what makes AOC’s audio so unique is not its content, but rather how it’s been used; to soundtrack make-up tutorials and beauty transformations. Across the world, Gen Z are filming themselves applying their make-up while mouthing along to AOC’s impassioned speech condemning toxic masculinity. Most featuring the congresswoman’s signature red lip of course.

It’s unsurprising that AOC has become a TikTok star and a beauty inspiration at that. She is, after all, the youngest woman ever elected to Congress and represents a younger, fresher brand of politics; as engaged in current affairs as she is in pop culture and digital trends. Like Gen Z, her love for make-up and beauty sits adjacent to her politics and she has never apologised for this, defending against accusations that make-up is “frivolous” in an interview with Vogue, all while expertly applying her own make-up and discussing the dismantling of the patriarchy of course. 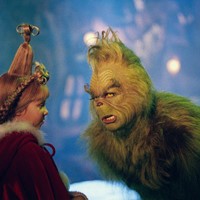 I had to do it. I wonder how AOC feels knowing most of gen z thinks she’s iconic? (disclaimer to the parents: foul language.)

For Sonali, who took part in the AOC challenge in the lead up to the US election, AOC is a relatable introduction to feminist politics for young people. “Last year, (America) unfortunately saw (Supreme Justice) Ruth Bader Ginsburg pass away,” she tells Dazed Beauty. “RGB was always an activist for women’s rights and with her passing I believe AOC has stepped into that role, becoming the voice that women need. I think that her audio on TikTok has absolutely been a way for young women to speak up when they can’t find the words themselves.”

Alex, who has found viral success for her educational #DecadeChallenge series, in which she uses make-up and fashion to chart the history of feminism over the 20th century, agrees. She notes that, by creating these kinds of videos, young women are challenging much deeper misogynistic attitudes. “Throughout history, women have been seen as ‘inferior’ and so a lot of the things we do – like make-up – are tainted by association,” she explains. “Make-up isn’t something completely superficial or apolitical. Throughout history, it’s always been a powerful tool of expression.”

“TikTok is allowing us a deeper insight,” she continues. “Unlike Instagram, which is very static – all you see is the end result, which can be judged as superficial, as women using make-up often are – TikTok shows the process and you can layer over context with these audios. It reveals how complicated and multifaceted we are, and that’s really empowering.”

“Make-up is a great way to grasp people’s attention and spread messages. It’s a non-threatening and a non-aggressive way to speak to all kinds of people, even those who don’t enjoy beauty. Art is art and people love to see art” – Purple Haze Mue, TikTok creator

For Haze, who goes by Purple Haze on TikTok, her vibrant dreadlocks now as iconic as her beauty videos promoting Black Lives Matter (BLM), it’s all about the artistry and connection that make-up offers. “Make-up is a great way to grasp people’s attention and spread messages,” she says. “It’s a non-threatening and a non-aggressive way to speak to all kinds of people, even those who don’t enjoy beauty. Art is art and people love to see art!”.

According to Zey, a student who creates videos promoting human rights issues across the world, from #EndSARs to Mexican rights, it’s the quick, fun nature of TikTok that lends itself to its educational successes. “The max time of a TikTok video is one minute,” she notes. “I think most people, myself included, would rather watch that than a 10-minute video or read an article.” Sara, also a student, agrees, explaining that she thinks Gen Z are also simply more likely to trust each other: “We do tend to get our information on TikTok, which I do think is because we feel more comfortable receiving information from people we can relate to. This can be a problem too though if they don’t do their research, which is when misinformation can spread.”

My heart is aching for Nigeria, I pray you get the justice you so rightfully deserve🇳🇬🇳🇬 ##endsars ##foryoupage ##fyp ##justice ##somali ##makeup ##viral

What unites these creators is that they intrinsically understand the power that beauty has on social media. All have grown up in a thriving culture of beauty YouTubers, on a diet of make-up tutorials and product hauls, and with a rotating door of beauty influencers; each explains that they had an interest in make-up first, the decision to bring politics into the mix was second. According to writer Alice Ophelia – one part of the hugely successful newsletter High Tea, a veritable bible for understanding Gen Z and TikTok trends – part of the lure rests in the sheer popularity of make-up on the internet. “Beauty trend videos are highly engaging, taking the viewer through a routine, which promotes active participation on the part of the viewer rather than passive consumer of the content,” she notes. “Mixing political messages within this familiar topic and content format is a subversion of the first iteration of beauty vloggers and archetypal beauty content that we’ve seen across YouTube and Instagram for the past decade.”

“Gen Z are disrupting the genre (of influencer beauty culture) by repurposing the format of tried and tested beauty content to fit their own narratives with politically charged messages,” she continues. “They know that TikTok has a distribution model that allows for the message to be widely distributed and will have a higher engagement rate because of the surprising message within. It’s almost a secret coded message for the viewer and makes them feel they are in on the activism itself.”

Hey guys my name is Feroza Aziz, I’m the girl in the video!! Tik tok suspended me from posting for a month because I talked about this. Please follow my Instagram @ferozzaaa because I talk more about this issue and how we can help!! And follow my twitter for any updates on this

In this, the beauty content is proven simply to be a vessel for political messages, a slick one that manipulates the TikTok algorithm. It’s a trick that saw Feroza Aziz, then 17 years old, go viral for spreading awareness of China’s detention of Rohingya Muslims on TikTok in 2019. She too framed the video as a make-up tutorial but then switched the narrative to politics, a narrative that her followers continued in the comments: “GUYS NO JOKE THIS TUTORIAL HELPED ME SO MUCH PLEASE WATCH IT,” one responded.

Likening the technique to the “Dancing to Ex’s Toxic Voicemails” trend, Alice considers it a clever manipulation, offering you something familiar but then subverting this for maximum impact. “It’s more about bringing awareness to issues that are largely uncovered in the mainstream media,” she notes. “(Gen Z) use TikTok to give a voice to the voiceless. They know how to package the beauty content with a political message, in a way that ensures it’s destined to go viral or have a huge organic reach.”

“(Gen Z) use TikTok to give a voice to the voiceless. They know how to package the beauty content with a political message, in a way that ensures it’s destined to go viral or have a huge organic reach” – Alice Ophelia, High Tea

For Alex, who’s also currently doing her masters in Digital Media and Society and applying for a PhD on the role of digital media in modern feminism, it’s a topic she’s passionate to learn more about. “Beauty content has a higher probability of going viral than something that has an overtly political message, probably because (TikTok) wants to be an entertainment app,” she considers. “They probably don’t want to become a political app because that’s going to be problematic for their advertisers and could hurt their bottom line.” Her theory is that by using the language and visual currency of beauty – hashtags in the captions, typical make-up content – it flags the video as entertainment rather than political, meaning it’s easier for the video to slide past the algorithm and reach the hallowed For You Page (FYP).

A report from the Intercept released last year supports Alex’s theory, proving that TikTok actively tried to sweep ‘ugly’, ‘disabled’ and ‘poor’ people and inflammatory politics under the rug, wanting instead to promote itself as a place for positive, beautiful, and neutral content. This was also the experience of Feroza Aziz, who accused TikTok of banning her and eventually, after much media attention, received an apology from the app and was reinstated.

In this, TikTok trends – especially beauty trends which garner millions of views and likes – can become a double-edged sword for the app. For every #PerfectAsIAm challenge, a wholesome and positive self-love trend launched by Marc Jacobs for their new Perfect perfume, lurks a dangerous and insensitive culture of bandwagoning. For example, 2020 saw instances of blackface and the ‘I Can’t Breathe’ trend go viral, both supposedly in ‘solidarity’ with BLM. Unsurprisingly all of the creators featured here expressed their disgust and discomfort, noting that there is a fine line between turning politically and emotionally charged subjects – such as BLM – into trends, and using an existing political audio to spread awareness, or using make-up to inform and educate in a sensitive way. “I don’t think changing your skin colour for a few hours makes you feel our struggle,” says Zey. “What makes a valid trend is when you use your words to inform. Words can be powerful and that’s all you need.”

“I do my make-up to politically charged sounds because that essentially forces people to listen to the sound if they are interested in my make-up,” Sonali adds. “That isn’t a trend, that’s a smart way to get your point across. It’s a very slim line, but at the end of the day the BLM movement is not a trend. By making it one, people are minimising the brutality that Black people face on the daily.”

Criticisms aside, they all agree that TikTok – and specifically beauty videos – are a valid form of digital activism, largely in part thanks to lockdown forcing conversations online. After all, when a TikTok tutorial of a sparkly eye look reaches hundreds of thousands of people across the world, carrying with it messages of feminism and human rights, it’s hard to argue with them. Each talk of the real world impact their videos are having, whether that’s inspiring young girls to start difficult conversations at home or seeing a video go viral, reaching people who don’t even use the app. Perhaps the revolution isn’t going to be televised, but rather presented with perfect eyeliner flicks and a sharp red lip.