Bulbous boobs, big stomachs and overlapping muscular systems – the Björk-approved creative breaks down her surreal creations and their inspirations

Take a look at Daisy Collingridge’s oddly shaped, slightly off-kilter forms blowing a kiss to the camera or striking a pose, hands on hip and you just might wonder what exactly you’re gazing at. Collingridge’s costumes show the different parts of the body, such as boobs, big stomachs or muscular systems, through quilted textiles. At first, you may not even be sure that there’s a real person under all those layers, but that’s what makes her pieces all the more surreal.

Unconventional and thought-provoking all at once, the London-based textile artist specialises in squishy, wearable costumes, done up in unusual pastel colours, with bulbous overlapped forms and shapes. Each piece is a unique vision and a statement on the complex aesthetics of the body. Collingridge got her inspiration for the unusual forms from the shapely muscles of bodybuilders and an exhibition she saw during her childhood called Body World, which contained dissected human bodies, animals, and other anatomical structures that were preserved through the process of plastination developed by Gunther von Hagens. She also credits a family full of doctors, nurses and medical workers as key inspiration for her obsession with the bodily form. 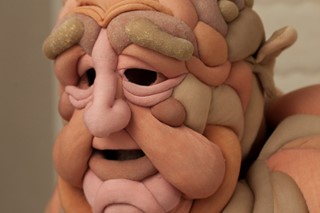 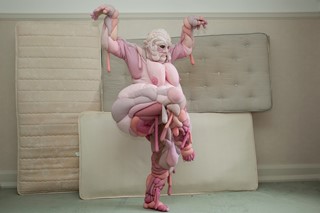 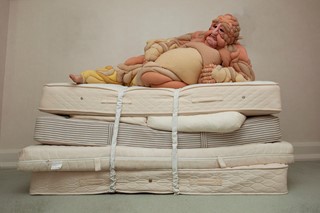 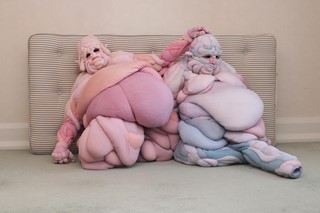 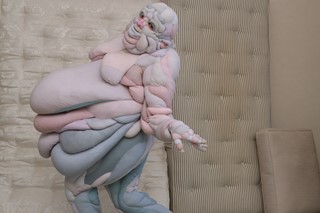 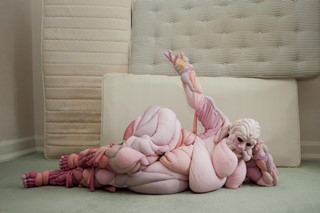 Collingridge studied fashion design at Central Saint Martins and was inspired to create her first costume after graduating in 2016, for the ‘World of Wearable Arts’ competition in New Zealand. It’s no surprise that her creation, which she now considers the prototype for her collection of weird and wonderful creatures, won the contest. “I often say my work is quite impulsive,” she explains. “The squishy idea definitely came from my graduate collection, which was all free machine quilted, but all done with really fat wadding. It wasn’t really your traditional patchwork quilt.”

Björk saw her work shortly after she graduated and took interest around the same time. In 2016, the artist got an email from the singer’s office manager and thought it was a scam. “I basically met Björk in a hotel in London, the summer after graduating, brought some of my graduate collection and she picked out elements that she liked from the different dresses,” she recalls. The resulting dress that the iconic singer wore ended up being a combination of two of her graduate dresses put together – a thick, neon yellow quilted midi dress that incorporated various graph-like patterns and shapes on the bottom of the skirt, courtesy of Collingridge quilting techniques.

Since then, Collingridge has put a full focus on her collection of anatomy-inspired costumes, creating a whole family. “I’d like to say I was really planned in doing this, but I’m not, I never have been,” she says. First, she decides on a colour palette and hand-mixes the paints. Then she makes all the internal parts, most sewn by hand because of the innate thickness of the quilting.“It becomes much more sculptural and a lot less about dressmaking.”

Each piece has a name and certain character traits. There’s Burt, Dave, Hilary, Clive, and Lippy, each with different forms, colours and personalities.“Clive is the happiest one,” she says. “He’s got a smirk on him. There’s just something really funny about Burt because he’s got these strange repeated bits by his eyes. Dave is made specifically for my dad who is called Dave, and he’s officially obsessed with him. He’s constantly out in our house.”

“I was designing, trying to work out how to make the idea of sandwiching layers and layers of fabric together to create these big reliefs in the stitched and unstitched part,” says Collingridge of her process. “Everyone I’ve made, I’ve made the with the head first,” she says. “That kind of suggests who they are and their character and then I’ll go on to make the rest of them. I make the head and they can watch me make the rest of the body.”

Whether it’s Collingridge wearing the costume to do a self-portrait session, or her dad wearing Dave as part of an exhibition, putting one of these pieces on has quite the transformational effect. “For me, I become more confident,” says Collingridge. “But unlike my dad, I haven’t really worn them when there’s other people around. I work so much by myself. When my dad was performing, there was like loads of people around and my dad is quite an introvert. Then he puts the thing on and becomes someone else. It’s actually quite scary, but it is the perfect example of being liberated. You’re suddenly someone completely different.”

Though Collingridge is using textiles to create highly squishy rolls and blobs that recontextualise the idea of what the human body is, she assures that the effect of changing body ideals and perceptions is just intrinsic to her work. “It’s really fascinating because as much as I can tell people what they mean or why I make these costumes, everyone comes at it with such a different view,” she says. “Everyone’s different. Some people fell apart laughing, there’s definitely elements of comedy in there, but I didn’t realise it was that openly funny. Some people obviously really hate them.” She pauses for a minute before declaring, “It’s about pushing quilting to the absolute extreme.”

“Burt and the family are impulsive creations,” she adds. “They are reflective of the human form with elements of fantasy. They neither promote or demote one body type. The idea there is an ‘ideal body’ is ridiculous. We are all so different, my work is more about the ‘ideal’ way to inhabit a body. To be joyous. They bring me joy to create and I hope that is reflected.”