From slime to Haribo, Andrew Gallimore is the make-up artist who has been using unexpected materials to create bold and colourful looks

Calling Andrew Gallimore a make-up artist somehow doesn’t do justice to what it is that he does. “I am a face decorator,” he suggests, “or an artist that deals with the face.” Like a painter, he treats the face as you would a canvas, reducing it to an equation of line, colour, texture and composition. But then again, he’s always had an affinity with art.

Born in Stoke on Trent, as a kid, Andrew was always drawing, painting, and just generally making things, something which was encouraged by his parents. “A lot of people say, ‘Oh you’re very natural with a brush and you have confidence in how you make a mark.’ That all comes from doing it as a kid and all the way through school being really nurtured. I don’t think without that sort of training I would work the way I do.”

It was while studying fine art at Manchester Met, that Andrew first developed an interest in make-up. Working in mixed media, he was often experimenting with fashion, photography, painting, and one day made the natural progression of painting on people ’s faces, using clownish black and white face paint he’d bought from a joke shop and his old art brushes that he used to paint his canvases with. Encouraged by his lecturers to think out of the confines of traditional beauty, Andrew began sourcing obscure make-up materials at the local charity shop. “I did a piece where I made masks from old brogues I had brought. I pulled them apart and stitched them together again in a way that fit the face, so they were almost like face corsets.”

Newly enthralled with the art of beauty, Andrew began contacting his favourite make-up artists to get answers for a questionnaire he’d put together for his dissertation, among which was legendary make-up artist Sharon Dowsett. The two stayed in touch and when Andrew moved to London, he ended up assisting her on a shoot for Dazed. “On the second day she was like, “I think you should come and assist me” and that’s how got my training really.” 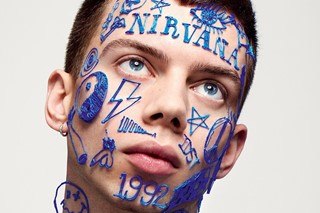 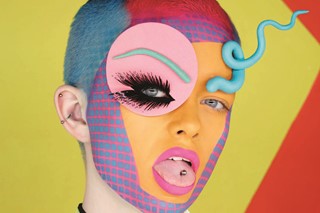 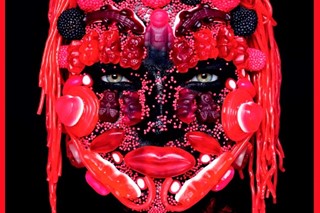 Looking back, an interest in beauty had always been there, he just hadn’t yet found a way of unlocking it. “If I look at the imagery I was inspired by when I was younger, preteen, things like The Rocky Horror Show, Madonna, Missy Elliot, all these things are very make-up heavy, all of which have definitely fed into what I do now. There was also my sister. She was a bit of a goth when I was younger, so she was constantly making her skin white, her eyes black, her lips burgundy and she had amazing blow-dried hair sprayed flat with a rats tail, and I just thought she was the coolest thing in the world. I also remember seeing a poster of Grace Jones on my sister’s wardrobe and thinking, ‘What is that!’ not even ‘who is that’.”

After four years assisting Sharon and learning the beauty basics, Andrew began carving out a career for himself. “That was about 15/16 years ago now. It was a really exciting time when people were embracing the more creative, experimental side of make-up. Alex Box was ruling with all her amazing creations. I have recently been drooling over Phyllis Cohen’s archive on Instagram - every image she puts up I’m like, ‘Oh my god I didn't know that was you!’”

Since then, Andrew has worked with some of the most revered names in fashion, from David Bailey to Sølve Sundsbø. He’s worked on campaigns for Versace, on shows for Christopher Shannon and on countless covers and editorials for Pop, Dazed, i-D, Paper, Ponystep and of course Hunger, where he has been Beauty Editor-at-Large for the last few years. In 2010 he was named as Dior’s first ever UK Makeup Ambassador, while in 2015 he came on board as UK Make-up Ambassador for Nars, where he’s been ever since. That same year he brought out a book with Rankin, a celebration of their long-standing collaborative relationship. “To work side by side with Rankin in such a collaborative way where he actively encouraged me to push the boat out and go a bit further and do more creative things was an absolute dream.” 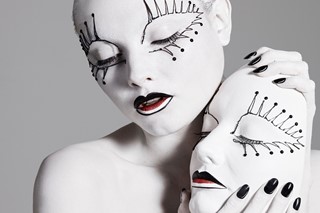 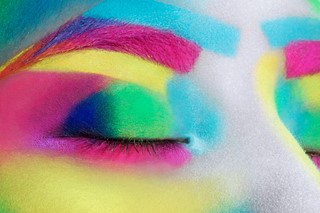 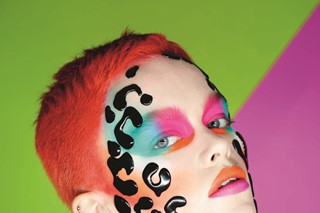 When it comes to Andrew’s expressive, painterly aesthetic, his roots as an artist can still be felt in every mark he makes today. Harking back to his charity shop days, Andrew is always adding an element of whimsy to his work, the blurring the lines of beauty with his use of incongruous materials: fragments of mirror, fresh flowers, beads, flags, action figures, Haribo, slime. For the most recent cover of Hunger, Andrew took a cast of model and muse Georgie Hobday’s head, transforming into a stainless steel-like ornament for her jawline, as a meditation on what the future of beauty might look like. He’s also a master storyteller. From wide eye anime creatures to characters from Roy Lichtenstein’s paintings, Andrew has that rare ability to create fantastical worlds from everyday materials.

“I think it’s always got to be beautiful,” he says. “But there is beauty in everything. I remember being at art college and the head of the college saying, ‘You people in this room are some of the luckiest people in the world because you have this ability to see things differently and to recognise qualities in things that other people don’t. You can look at something decayed, or dead, or inside out, something that’s been burnt or covered in black paint and you can see a beauty in it.’ Even if it’s something that isn’t conventionally beautiful, like a technically gorgeous woman, as long as it’s something that’s visually exciting and I guess really appealing, then it can be beautiful. It just has to flick a switch in me, make me feel alive, feel something.”

Has our perception of beauty changed since he first started out in the industry? “I like to think we are becoming a bit more accepting generally. There is a lot more diversity in models today whether it be their gender fluidity or how they look. There are people doing really well as models today with what would have been considered flaws. Like even having gapped teeth. Years ago that would have been considered a no-no and now it’s celebrated.”

Just like our definition of beauty has evolved, so too, Andrew observes, has what it means to be a make-up artist. Thanks to Instagram, people from all over the world can share their make-up looks and hashtag their way into the industry. The result, he says, is healthy competition.

“I feel you have to take some sort of ownership of it now. Almost prove yourself, because there is a massive saturation of people doing it, not just professionally but off their own backs for their Instagram feeds. There is definitely a feeling of, ‘Oh everyone’s doing it now’. What's the difference between me doing it for the pages of a magazine and someone doing it for their Instagram feed? It’s a massive change. But I think ultimately it’s got to be a good thing because it’s promoting beauty and keeps it all selling. And they’re experimenting with it.”

With Instagram giving visibility to pockets of experimental beauty all over the world, there is a tendency to view the time we live in as a vacuum of unbridled creativity. But, as Andrew notes, people have been subverting traditional modes of beauty for years, which is comforting in a way, as it highlights an inherently human impulse to rebel against the status quo and challenge existing dogma. “Well, if you think about what we looked like 30-years ago, it’s not all that different really in terms of make-up," he says. "You look at people walking down the street who are a bit more out there and it’s no different to what punks were doing, and if you think about twenties make-up – black lips and thin eyebrows – it was a strong look. Even back in Elizabethan times, Queen Victoria shaving her hairline. That was way before Divine did it...”

Ultimately, says Andrew, it's a cycle; these things have happened before. “Matthew Glammore the club promoter once told me about how ‘the dress-ups’, as he would call the club kids, their looks were always political. If you can’t be heard be seen. I thought that was amazing and it is literally these kids saying, ‘I am not going to conform to how you think I should look or how I should behave, or who I should sleep with or what I should dress like. The same is happening now.”