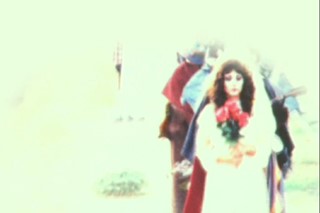 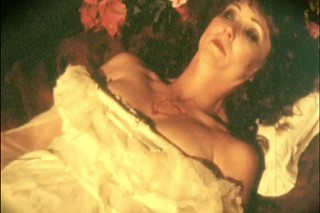 Marnie Weber is a multi-media artist with near-legendary status in Los Angeles, having played in countless feminist punk bands in her youth, created a variety of highly-acclaimed Anger-esque Super 8mm films and designed iconic album covers for the likes of Sonic Youth. For the last five years, the artist has performed live with her masked surrealist punk rock troupe The Spirit Girls – a conceptual art piece about an all-girl group from the 70s who died young and came back as spirits in order to communicate their message of love and emancipation through music.

Having made four Spirit Girls films, dozens of Spirit Girls collages and sculptures, a full-length CD (and performed many live performances), Weber felt it was finally time the girls returned to lands of the dead and laid them to rest via a coruscating punk rock show in Pasedena's gargantuan Mountain View Mausoleum (with a little help from the monsters who offered a guest tour of the adjoined cemetery). Here, she presents an exclusive edit of the film in the exhibition at the mausoleum, Eternity Forever, and tells us why embracing your demons can release your soul.

Dazed Digital: Why did you choose to exhibit your latest show in a mausoleum?
Marnie Weber:  I thought it was a good time to put the entire series to rest and what better place than a mausoleum? For the performance we all arrived in an old vintage cadillac and played  to a sold-out crowd of living souls and many more horizontal lying at rest. I kept thinking, 'This really can’t be happening!' I can’t believe were getting away with this. But I did feel the presence of spirits and I think they were enjoying themselves. If not, all kinds of things would have gone wrong but everything fell together magically.

Dazed Digital: Did you feel like you had a captive audience of spirits considering all the dead people in there?
Marnie Weber: I think a lot of spirits move on to do their work elsewhere and whatever spirits who were there might have some connection to the place or possibly the band members. The builder and architect Cecil E Bryan designed 80 mausoleums all over the world but chose Mountain View, his crowning jewel, to be his place of eternal rest. His spirit hangs around the office smoking a pipe, and the people who work there claim to smell the pipe smoke. I feel like the Spirit Girls were returning home through the mausoleum and performance, but I don’t think they will hang around there, they will go somewhere else to play.

Dazed Digital: What inspired the film? It seems to deal in evoking the imagination to deal with loneliness and isolation?
Marnie Weber: I wanted to do a film about befriending monsters and personal demons. Now that I’m older, I really embrace the emotional extremes and craziness of youth. Many people feel their personal demons are bad but I think they were just friends who were helping me gain an appreciation of  life.

Dazed Digital: How personal is the film?
Marnie Weber: I think there are personal moments mixed with a great deal of theatricality to get across basic human emotions. For instance, the father character has aspects of people I have had relationships with, not necessarily just my father. My father was kind and loving but was absorbed in his work. The father character serves as more of a catalyst for the lead girl to express her sadness of not being seen in her lonely, isolated relationship. This is a feeling most of us have had at one time or another. Then in her bedroom she looks to her taxidermy deer head on the wall who is her personal sage and who (ironically) gives her advice about freedom. She then conjures up monsters from within her soul and befriends them, falls into a deep sleep and then leads a beautiful procession with her monsters and journeys off to another world.

Dazed Digital: What do you find so satisfying about taking on alter egos?
I think it is like becoming a character within a dream interpreted in a Jungian sense, all the different characters are really parts of oneself. Some of the characters are shy, some are sexy some are scary. For instance, the monsters performing in the film and graveyard were aspects of my personal demons I befriended. If one were to analyze deeply one could understand their personal development through the characters but I don’t care to. I just move on to the next project.

Marnie Weber is represented by Simon Lee Gallery in London. Eternity Forever is at the Mountain View Mausoleum in Pasedena until December 20