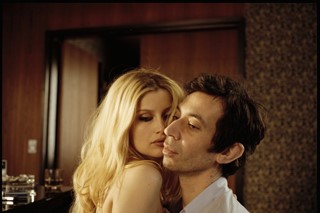 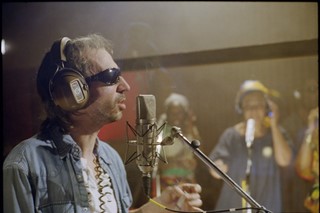 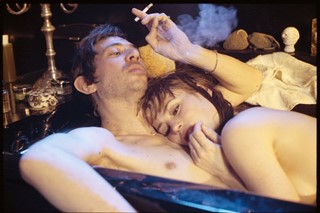 Biopics tend to fall into two categories; they’re either embarrassingly reverent or overcritical of their subjects with little middle ground. The writer or director attempts to re-imagine folklore in order to convince the viewer what they’re witnessing is the truth. The result is usually duplicitous and worse still pedestrian, so as not to threaten the image conjured up by those who’ve paid their money and invested much more, often vicariously believing the subject to be an extension of themselves in their imaginations. Like Serge Gainsbourg burning backnotes and offending the French nation, Joann Sfar, a celebrated French graphic novellist, has set fire to the blueprint for making such films.

“I wanted to make a biopic about Serge Gainsbourg and then people told me about the word biopic. I have no conception of that - I like to work with reality and make a fiction out of it,” he tells me at the Institut Francais in South Kensington where he is conducting interviews throughout the day. Having completed his first picture the gruelling schedule is all new to Sfar, though he remains upbeat. “They carry me around from one place to another,” he shrugs. “Like Larry Flint in his wheelchair.”

Sfar as a director is the least pretentious you’re likely to meet and his candidness is refreshing. He is self-depreciating and amusing. He confesses with no hint of shame that his ambition was to “make a musical with puppets and sexy girls” and Gainsbourg, who he has been drawing for more than 20 years, presented him with that opportunity. “I was very late - all of my contemporaries had made movies so I thought I’d better get a move on.”

Gainsbourg (Vie Heroique) has garnered rave reviews thus far, though Sfar himself is far from convinced the movie is any kind of masterpiece. “I’m not sure I wrote a great story,” he considers reflectively. “My perception of the movie is that it is a first movie. I am learning the language and I want to learn and I know that learning can be a slow process, so hopefully this is the beginning. I wouldn’t dare say I wrote a good script, but I love the scenes, I love the pictures and I love the beginning of the movie.”

The first section is concerned with a precocious young Lucien Ginsberg, developing his talent and his eye for the ladies and also discovering he is Jewish and what that means in occupied France. He is followed by a rotund caricature of a Jew, a grotesque depiction from a Nazi propaganda poster, which emerges from its two dimensional state transmogrifying into a 3D companion. Serge sleeps in the same bed as the effigy and also wears a yellow star with belligerent pride; it has been thrust upon him to identify that he is Jewish.

It commences like a delightful children’s story, and you’re thrown off guard when the nudity arrives. Over the space of two and a half hours it crashes through the back gardens of many genres, gathering random laundry along the way. It is a movie with no concerns for convention or appropriateness. Sfar replaces one puppet with another with the mischievousness of Gainsbourg’s own drunken alter-ego Gainsbarre. The film is fantasy, it is a comedy, a biopic and a cabaret, and it all swaggers with a certain Brechtian camp punkness. It’s certainly flawed and unpredictable but that’s part of its brilliance, a description that wouldn’t be unbefitting of the great man himself.

“My issue is that, you know, it’s not only a first film, it also could be a last movie, so I wanted to put in everything I love like animals, kids, songs, puppets. So I said okay if I only have one movie to make in my life, let it be this movie! When you’ve never made love you so much want to do everything correctly. There’s a little bit of that in the movie and I love that." “Maybe it’s about all the pictures I saw on television when I was growing up as a kid. Nothing is left out. He is a character who loves not to change. It may not represent the truth but it’s the truth as I see it.”

Indeed, Sfar includes L'Hippopodame, a track that despite its catchiness never finds its way onto Gainsbourg compilations thanks to the lyrical content. “‘You have a very big fat ass’, that’s what he says to the woman. This is so rude, and this is so him, and I loved to show the lady crying and him so happy. And you think to yourself, ‘do I really love that guy?’ and then you think to yourself, ‘I’m afraid, yes’. It’s one of the important moments in the movie from my perspective. I never try to save him.”

The high-profile romances Serge enjoyed with Brigitte Bardot and Jane Birkin are central. Joann says the movie is a love letter to France, beginning with him discovering he is a Jew and ending with him buying the Marseilles, with the female characters symbolising the emancipation of ideas and the growth of the French nation. This is a little hard to swallow, but you can’t but admire the ambition and the thoroughness of thought. Though Laetitia Casta may not have been everybody’s first choice for Bardot, Sfar was pleased with his casting choice.

“In my perception casting is one of the most overrated aspects of a movie. There are many ladies who look more like Bardot but she was the one who had the presence. “We had to hide parts of her body for pregnancy concerns,” he adds.

Tragically Lucy Gordon who played Jane Birkin hanged herself shortly after making the film. She’d made the move from modelling to acting and her career showed great promise. Naturally it devastated and confounded everybody around her and caused a predictable tabloid hullabaloo on both sides of the channel.

“She was a beautiful girl, always happy and always on set even when she didn’t need to be. When she died it was in the two weeks we were editing so obviously the whole film was tainted by it. She looked after people and in her industry when she was modelling, it was girls who went on to nothing that killed themselves. She was very talented and had so much to live for. It’s very difficult to understand. You try to get some meaning or understanding but really, you gain nothing from this.”

While casting is apparently unimportant to Sfar he couldn’t have possibly found another actor on earth who looks more like Serge. Eric Elmosnino is spookily similar, though the character’s personality feels more like a representation of what Gainsbourg stood for. Though he looks so convincing his representation seems somehow clumsier, geekier, than the Serge many of us think we know.

He was great,” says the director. “He didn’t know anything about Serge when he came to us. He came to the part as if he was a fictional character, and I don’t like the idea that I’m directing an actor. I love to study the moments of the movie with him and we had five months of rehearsals before shooting. We would work on scenes but it was not ‘let’s sit down and work’. We were lucky enough to have time to let the character grow and we created maybe a ghost, or a copy, or something like that.”

I wonder if it was disconcerting approaching an individual who in France is as famous and adored as Elvis Presley is around the world.

As an icon/iconoclast, Gainsbourg is Johnny Rotten and Elvis all rolled into one in his native country. But was it really such a heroic life?