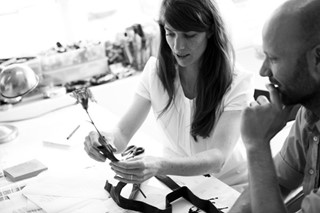 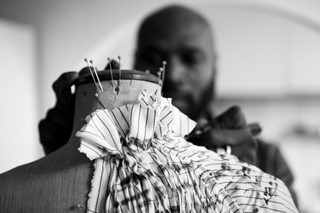 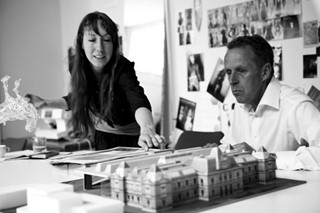 The late Italian designer Gianfranco Ferré often highlighted in lectures and interviews that, though he never worked in the architecture field, the discipline in which he had graduated at Milan’s Politecnico, each of his creations had something architectural about it. He would have appreciated 'Fashion & Architecture' exhibition, a project launched by Amsterdam-based non-profit foundation ARCAM, Liza Koifman & Tomas Overtoom’s Ontfront and Wouter Valkenier’s V2A architectuur & stedebouw. The exhibition showcases the projects made by four duos, each comprising a fashion designer and an architect, who collaborated together developing intriguing designs. Playing with the concept of seasons, and its meaning in fashion and in landscape architecture Mattijs van Bergen & Anouk Vogel created a dress covered in flowers that symbolically brings the seasons to life; Farida Sedoc’s Hosselaer and Nicole and Marc Maurer’s Maurer United Architects developed an installation comprising five block-shaped sculptures inspired by the aesthetic of the De Stijl and the Bauhaus movements, accompanied by a series of T-shirts characterised by angular shapes.

Sustainability inspired instead Kentroy Yearwood’s Intoxica & Jeroen Bergsma 2012Architecten‘s project, a dress created using vacuum cleaner hoses, plastic tubes, iron wire and packaging materials, while Iris van Herpen moved from the imaginary water contained in the bathtub-shaped extension for Amsterdam’s Stedelijk Museum designed by Jan Benthem and Mels Crouwel's Benthem Crouwel Architekten for her dress in a Plexiglass-based material that gives the illusion of seeing pure water splashing around the body of the wearer. The contrasts, tensions and similarities generated by these projects, highlights ARCAM Project Manager Flora van Gaalen, shows there is definitely an intriguing dialogue between the creative processes behind these two disciplines.

Dazed Digital: Is this the first time ARCAM gets involved in such a project?Flora van Gaalen: Once every couple of years we invite young architects to introduce themselves to the public, and, while the concept behind the “Fashion and Architecture” event is very similar, this is the first time we actually explore the connection between these two fields. But I think that the links between fashion and architecture are just being discovered: a while back there was the “Skin and Bones” exhibition in London and there are a few interesting publications about this connection, but there is much more to say about it and I’m pleased to see that we have a few architecture and fashion students here who are writing their dissertations about these topics as well.

DD: How did ARCAM get involved in this project?Flora van Gaalen: The idea for this exhibition actually came from an architect and a fashion designer. The Amsterdam–based fashion label Ontfront by Liza Koifman and Tomas Overtoom was in touch with architect Wouter Valkeneir since they were working on a project together. At the time the architect was doing a project for a coffee bar and needed somebody who could do the textile part and the staff uniforms and that’s where Ontfront came in. After they met and realised they had similar ways about conceptual design and really got it off, they regretted the fashion designers only participated in the project when the architectural design was finished and thought it would have been interesting to see what would have happened if both an architect and a fashion designer would have been given a brief and would have been asked to work together. So they got in touch with ARCAM and submitted us their idea.

DD: Were you sceptical about the project when you first heard about it? Flora van Gaalen: At first we were a bit sceptical, because, while it sounded hip and trendy to connect the two disciplines, we wondered if there was a need for such a research and if there were any real similarities or differences between the two fields. We actually realised it was vitally important to do such a research, because this connection is really happening and we found several reasons why it’s really interesting to elaborate more on this subject.

DD: Was it difficult to select the fashion designers and architectural firms that could take part in the project?Flora van Gaalen: It was a long process and we talked to architects, fashion designers, advisors from fashion institutes and architecture critics, trying to spot people who were open to this kind of work and also looked for teams who may have provided an overview of Dutch fashion and architecture. In some cases we introduced the teams to each other but then we left the discussion open to let them decide if the match really worked. We thought for example that since Kentroy Yearwood and Jeroen Bergsma both focus on sustainability in their work, while fluidity seems to be at the core of Mattijs van Bergen and Anouk Vogel’s work, they would have displayed good connections. Farida Sedoc’s Hosselaer, a streetwear label that tries to get people in contact with place, showed some connections with Nicole and Marc Maurer’s works, based on finding innovative ways to integrate new media into buildings, creating interactive places for people. Iris van Herpen, a fashion designer who works not only with fabrics but also with rather unusual materials such as parts of motorcycles and who spends hours and hours working on one creation, seemed to be the perfect match for Benthem Crouwel, since this is an architectural firm based on finding enduring solutions for complex briefs.

DD: Were you surprised about the final results?Flora van Gaalen: We hoped we would have got totally different designs and, though wearable, because the wearability was one of the requirements, the results were strikingly different for what regards colours, textures and materials. The most surprising aspect that we didn’t really consider at first was that the whole creative process was completely different for each group: for example, Iris van Herpen was inspired by the imaginary contents of the bathtub-shaped extension designed by Jan Benthem and Mels Crouwel for Amsterdam’s Stedelijk Museum, so, rather than moving from a construction material, she reacted to a concept. Kentroy Yearwood and Jeroen Bergsma’s design didn’t start instead from an idea, but from a process that also involved going to waste processing company Icova in Amsterdam’s Westelijk Havengebied and picking from the garbage useful things to give them a second life.

DD: Which was the most exciting aspect of this project?Flora van Gaalen: Asking two different groups of professionals to work together, integrating their disciplines and ideas, rather than asking one designer to come in at the end of an architectural project and vice versa. I do believe that such collaborations can actually generate stronger projects and ideas and encourage professionals to think in different ways.
DD: Do you think the visitors’ perceptions or prejudices about architecture and fashion will change after seeing this exhibition?Flora van Gaalen: I’m sure that new discussions, thoughts and ideas will be triggered by this exhibition also thanks to the fact that we tried to show the process behind the results to the public. The main installations show the results of the collaborations, but we didn’t want visitors to just come and see an impressive, well-designed installation, so we integrated in it photos, texts and detailed descriptions to show how thing were developed and designed step by step. While I think the main theme of the exhibition is intriguing, the process is of vital importance and it’s a shame that usually the public doesn’t get to see the work-in-progress behind a project. The architects and fashion designers who worked together didn’t know each other beforehand - in some cases not even in name - so they had to go back to the origins of their own disciplines and explore them and I think this aspect will prove vitally interesting for the public and inspire people to discover further these disciplines and develop interesting connections and dialogues.
“Fashion & Architecture” is at ARCAM, Prins Hendrikkade 600, Amsterdam, until 11th September 2010.