Dazed take time out with the prodigiously talented painter currently setting fire to The City Of Angels to talk Obama, Francis Bacon and Dash Snow 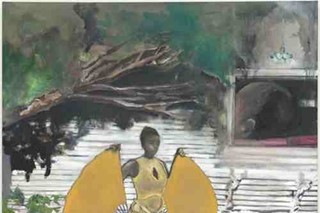 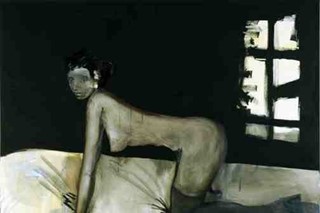 There is one hell of a buzz surrounding the 26-year-old artist Noah Davis at the moment, and he is certainly in good company where he lives and paints in LA. The legendary skate art hero Ed Templeton, for example, is just one of the leading artists represented by the same gallery as him. The sense of long hot summers imbues Noah’s canvases with an engaging warmth and depth of tone, and all of his works could just as easily be set in Louisiana as in his hometown, with the absence of any specific time and place making room for an exotic use of colour.

Davis attended the Cooper School of Art in New York, and after graduating he stayed in NYC to hang out with graffiti kids, although this style never truly appealed to him and he soon moved to the West Coast to begin an administrative job in public arts. While working in the famous LA art bookstore Moca, Davis gorged himself on art history and it wasn’t long before he found himself in a position where he wanted to paint again, with a nudge from new friends like Dash Snow and Ed Templeton. Davis’s work was recently shown at Art Basel, Miami 2009, and his paintings featured among the Rubell Family Collection exhibition, Black Artists, but this is not how Davis would like to be defined. While being black clearly influences his work he insists it’s not about race, tempting us to ask if he is the first artist of an Obama-era America?

Noah Davis: Race plays a role in as far as my figures are black. The paintings aren’t political at all though. If I’m making any statement, it’s to just show black people in normal scenarios, where drugs and guns are nothing to do with it. You rarely see black people represented independent of the civil rights issues or social problems that go on in the States. I’m looking to move on from that stage, we can’t keep tying our culture to a movement that happened two generations ago.

Dazed Digital: Has America reached a post-racial stage – one that everyone billed Obama would herald?
ND: I know I’m going to live to regret saying this, but yes. I know there are neighbourhoods in LA and surely in London where these scenarios are an everyday thing. But luckily for me that’s not the case, so I don’t think my pictures have the right to discuss this. Their responsibility is to represent the people around me. They’re my reference point but they’re not the point I’m trying to make.

DD: Many people expect artists to represent big moral issues...
ND: My paintings just have a very personal relationship with the figures in them. They’re about the people around me. I want people to read them like this whilst taking a meaning of their own from each work. My first paintings were dealt with political issues but they were silly and out of my depth.

DD: When was the turning point?
ND: I did a work called American Sterile. It was really influenced by things Ed Templeton had done. On the one hand, it’s a rejection against the nude but the reality of it was that the work came more from my own static creativity. I wasn’t even going to show it, and then someone from the gallery where I had my first show came over and saw it. He loved it, which was funny because I was actually really close to painting over it. I would have but I’d got to the point where I had run out of shit to paint. The Mountain School in downtown LA helped me out massively when I came to LA. Eric Wesley and Piero ran it from a little room in the back of a bar. Students were taken on tours of artists’ studios during the two classes a week and I found it to be a really inspiring place. Then I guess it was Dash Snow who really encouraged me by making me quit me job.

DD: So you knew the late artist?
ND:Yes. He was on fire. I kept telling him how good he was but he was so humble. Although he had lots of people around him who tried to tag along for the ride, they probably contributed to his death as much as he did. I don’t think he had any idea of his talent and although he received heavy criticism I think everyone was jealous of him.

DD: American Sterile is quite like a Larry Clark photo.
ND: (laughs) That’s an honour. I love him. I think all of our childhoods were slightly based around Kids. Even though I wasn’t a skater that movie set the scene for what you thought life should be about.

DD: What influences you now?
ND: I think a lot about German painters, such as Neil Rausch and Daniel Richter, and those guys from the Leipzig School. Then there’s Peter Doig, Francis Bacon and Lucien Freud from Britain who all created their own language for their work. Henry Taylor too. He couldn’t give away a painting for a while, even though now he sells for Saatchi. Race wasn’t an issue for him, black people were just around. He’s a real painter; he stuck with it even during those times. I always ask myself if I would have that kind of commitment.  I think the dream for any artist is to create a world in which you can express your own ideas. Dash managed to achieve this language too.

DD: His work is automatic, it boasts the raw talent that defined Beautiful Losers.
ND: Right, there’s a voyeurism in his work that makes you want to be there. Like in Francis Bacon’s work. He wasn’t technically the best painter but his talent lay in the use of colour. His strokes created worlds of his own. Painting does something to your soul that nothing else can. It’s visceral and immediate and is always readdressed in new ways that keep it relevant. While I was in New York I became jaded and I only wanted to see drawings. Now I think it’s very important that art remains to be about ideas, but it shouldn’t be an either or battle between concepts versus painting. They can exist together. I guess when my school forced fed us a conceptual education I reacted against it. I left school because it wasn’t teaching me anything.
Read More