Indestructible truth, desire capitalism and orgone accumulators get it on in Martin Sexton's radically subversive exhibition 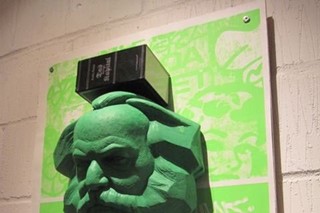 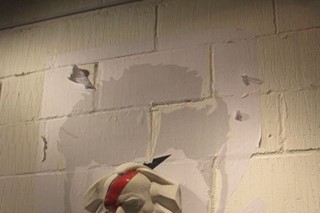 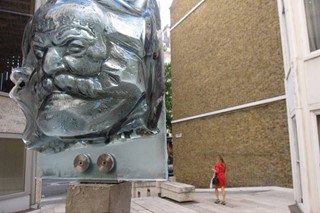 Martin Sexton is an artist interested in cosmology, metaphysics and notions of consciousness, posing fundamental questions about what it actually means to be human and the societal constraints that contain our short existences (as anyone who caught his outstanding contributions to The Age Of The Marvellous will attest). Like many great artists, he does not come from an art school background, and considers himself to be coming more from the point of view of a writer, or perhaps more accurately from that of a raconteur of both constructed and real mythologies. He describes his investigations into the human condition not as artworks per se but rather as sculptural poems, and all of his work is heavily loaded with symbolism that references those individuals who have most poignantly affected human thought and society, from Socrates, William Blake and Slavoj Žižek to Karl Marx and the Dalai Lama. In his typically controversial Spectres Of Marx exhibition the artist explores the construct of capitalism. Presenting various representations of Marx's visage, he plays upon notions of what actually constitutes desire, and pays tribute to the ultimate rebel psychoanalyst William Reich. We took some time out of mind with Sexton to talk desire, corruption and indestructible truth...

Dazed Digital: What is Spectres Of Marx all about?
Martin Sexton: It’s about ideologies, notions of consciousness and the ideas of William Reich, who wrote The Mass Psychology Of Facism. Reich was brought up in Nazi Germany and was a psychoanalyst who very bravely raged against nazism in an extreme way. When his friends started being murdered he fled to America, but as an open communist who talked very openly about sexuality he hit McCarthyism head on.

DD: So he was out of the frying pan and into the fire…
MS: He had his books burned and was imprisoned, dying behind bars. Reich was influenced by Freud but he but split from Freud over notions of libido. Freud felt that libido had to plug into society and ideas of culture, because he was concerned that if we didn’t have a societal framework to plug into, there would be anarchy. Reich, on the other hand, says we are free individuals and that we don’t have to plug into anything, or be controlled by anything or anyone. Reich was considered to be really out there and built cloud-busting machines and Orgone Accumulators.

DD: Orgone Accumulators?
MS: Reich said orgone energy was the positive bioenergetic force in the universe, and that it fed into these notions of libido. I made some orgoneite material to his formula and it’s central to the show – its just resin with alumnium, rose quartz and white quartz, and it attracts orgone energy. In line with the protocol, I’ve added extra orgone to it – bathing it in in Glastonbury well, then shallow burying it in various sacred sites across Britain, including Stonehenge and the tip of the erect penis of the Cerne Abbas giant in Wiltshire.

DD: And Reich’s ideas about desire, orgone and social control all come together in these manifestations of Marx?
MS: Well, Sex With Karl Marx, for instance, is a recycled television screen, which has been cast as Marx. Here, Marx is presented as the infernal desire machine and this goes back to the ideas of Reich, libido and desire. In a sense, capitalism is the serpent – it’s this process of offering us what we think we want, but what we actually don’t need. Slavoj Žižek has this notion that we are not born with desire but that we learn desire, and capitalism has got the ownership of desire – it’s got all the toys and its got all the goodies. There is this constant idea of capitalism being able to shapeshift and change itself – in a sense, it’s the only transgressive thing; contemporary art isn’t really transgressive at all, it’s just a pretence, it’s a conceit. If you want real transgression have a look at capitalism! It’s something that can collapse in upon itself and still continue because it perpetually sheds its skin and is born anew. What is interesting about Reich is that he is trying to reclaim this desire by saying that we don’t need to have it wedded to economy, we don’t need to have it wedded to capital. Sex With Karl Marx transmits some of Reich’s philosophy about desire with its clipped public information announcement that pronounces that we should all 'fuck freely'. Lots of the busts have these kind of allusions – Zizek Sputnik, Orgasm Addict… The Das Kapital that I’m keeping in the safe is made from orgoneite.

DD: And you have scenes from Blow Up playing inside a massive red camera, what is the significance of that?
MS: It’s really to do with the idea that Hemmings plays this kind of ultimate fantasy capitalist. He’s the like the ultimate playboy – he drives a Rolls Royce, shoots and sleeps with beautiful women, and yet he complains that he’s not rich. He is manifestly rich! But he’s not happy. He’s trying to search for authentitcity and meaning in his life, so he’s photographing people in dosshouses and people on the dole, and showing the pictures to his publisher. And of course, the camera is spectacle and the women are dressage, so we are back to this idea of sex and selling and this notion of desire, and he’s kind of the instrument of all of that.

DD: So there is a notion that this constructed notion of desire is corrupted, that it corrupts the individual?
MS: In the Blow Up edit, we have this interesting moment when the off duty voyeur in Hemmings takes over, and he photographs the mysterious scene in the park. He becomes fascinated by the scene and starts to blow up the photos, and, as he is enlarging them, he realises there is this gun pointing at the couple. He goes back and finds a body, but when he tries to convince his friends that he has witnessed a murder, no one is interested – there is this notion that that in a corrupt society, virtue isn’t rewarded.

DD: And where does the film Indestructible Truth come in?
MS: Indestructible Truth claims to be found footage shot in Tibet in 1958. It documents a man who has been told he can reach enlightenment in his own lifetime, and that he can escape the trappings of capitalist society and travel to shambala. It features passages from CG Jung’s Memoirs, Dreams And Reflections, particularly one when Jung describes being in hypnopompic state (sleeping coming into waking) and seeing two UFOS come towards him – the thought passes through his head that he is their projection, but then he considers that if that were true then who or what manipulates the apparatus? Thus suggesting that consciousness isn’t necessarily this thing that’s just inside us, maybe it’s out there. These are big questions being asked about the point of origin – what is happening? Is something being communicated that is significant? The truth is perhaps not in the answer, but in the continuation of the questions…

Spectres Of Marx is at The Art Wars Project space, 23 – 25 Redchurch Street, London E2, until November 30. Martin Sexton is represented by All Visual Arts
Read More