Giant rabbits, transcendental meditation and the spirits of dead girl bands come together in the legendary artist’s new show 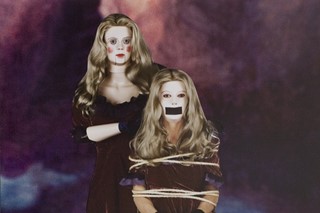 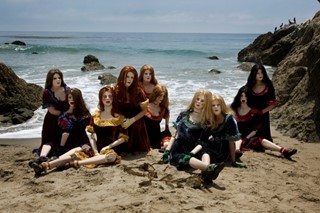 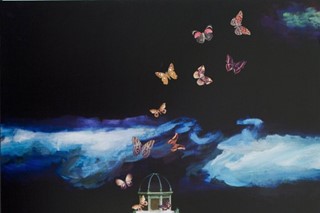 There is something both reassuringly familiar and starkly unsettling about the strange netherworld evoked by the artist Marnie Weber. The LA-based polymath has been sharing the dark wonderland of her subconscious with the world for over 20 years – a place largely populated by sinister animals and ghost-like vaudevillian doll-faced figures that drift freely across various artistic mediums, always seeming as though they are just on the brink of reaching out of the dream and stealing us into their haunting universe.

This month, Weber is showing a new film entitled The Truth Speakers: The Sea Of Silence at the Simon Lee Gallery, the latest chapter in the ongoing saga of her ethereal all-girl experimental band The Spirit Girls. In this episode of their Ulysses-esque adventure they come across The Truth Speakers – ventriloquist dolls with which they perform a disturbing theatrical show to an audience of lascivious animals, before committing their wooden carcasses to the depths. We stepped behind the red curtain to talk to the artist about transcendental meditation, channelling dead spirits and dreaming your own reality….

Dazed Digital: Who are The Spirit Girls and what are they a manifestation of?
Marnie Weber: It started by trying to fill a hole in my youth. I used to go to a lot of rock concerts of the theatrical kind when I was young and there were no women on stage at all. It would have been really nice if there were an all-girl prog rock band from the 70s because that would have been inspiring to me. I thought it would be interesting to do a conceptual art band, where the band had died in the 70s and hadn’t been given their chance. They come back and they run into problems because people can’t see or hear them, however the animals are aware of their presence.

DD: Where does this limbo they are moving through come from?
MW: It’s a fantasy world and to me it’s more interesting than the real world. That probably came from my childhood. I spent a lot of time alone put in the woods making up things that were more interesting than my life. I have kept that practice up my whole life and I can’t do reality-based work anymore. I feel like the girls just live in a parallel universe and after I do a film about them I analyse it like a dream that I can apply to my everyday life.

DD: What is the significance of The Sea Of Silence? I started practicing transcendental meditation this year and the film speaks to me of all the different voices that drift across the void. There’s the profundity and the baseness all on one level….
MW: I started meditating this past year too. When you do that people talking can seem like little squirrels or something (laughs). That’s why I think the bar room humour in the film seems totally parallel with the pseudo-philosophy that we are our souls, our bodies, our minds. They seem to me to be on the same level.

DD: In that silence is there something that you connect to?
MW: I think so. I like the idea of falling into a silence like the ocean, and all the little pieces of water that make that ocean – it’s hard to talk about it without metaphors….

DD: If more people explored inner silence do you think the world would be a better place to live in?
MW: The more complex emotions that create a lot of the antagonism in the world are hard to combat. The chain of time is so long that maybe it is going to take generations to repair on a worldwide basis. It doesn’t even have to be meditation though, it can be going to an art exhibition and finding a quiet space and seeing work that opens up the veil and makes people realise that their own subconscious isn’t such a scary place if there are artists dealing with scarier places in their subconscious… That’s sort of what I like about my work, that people on all these different levels could walk in and enjoy it and possibly feel inspired by it. It’s not so removed from people’s lives. They don’t have to have the history and education that minimalism would dictate that they need to have to appreciate it. I think people have been taught to think that art is trying to pull the wool over their eyes or that they are going to be fooled. I guess there are some artists that try to fuck with people, but I come from complete sincerity and try and infuse it with some humour and emotion.

DD: And who are the Truth Speakers, what do they represent?
MW: In a Jungian sense they are aspects of myself, and perhaps they are inspired by people I know, because they do seem to have distinct personalities. It’s almost as if there was a ghost trying to speak through the girls because a lot of the dialogue just popped up. Maybe they do act as some sort of a conduit, which is originally what ventriloquism was. In Greek history they would use a doll to channel dead people’s spirits and it wasn’t a form of entertainment at all, but I think entertainment paralleling spirituality makes for an interesting paradox. I like the idea of spirituality as entertainment. It makes it fun.

DD: Do you think death is a form of transformation?
MW: There is no doubt about it in my mind. I think it’s just like a new movie when you pass on, and it’s perhaps a movie of your own making. If we all happen to be directors in this dream after we die, then we could maybe meet up with other people who are directing their movies.

DD: I guess that only falls down when you figure that if you are the director of your next incarnation, you might have directed this one little better?
MW: (Laughs) That’s true! But I do love the director metaphor though, because it takes it out of the hands of God and places you in the director’s seat.

DD: In your artwork you have created a lot of human/animal hybrids. With the current advances in genetic science, do you think we might start to see creatures from our mythologies manifest in our reality?
MW: That’s really interesting. I think maybe we are seeing it already – we are seeing stories of elephants being born without tusks because they know that people kill then for them. That’s a human and animal relationship creating a hybrid already. It will only get more and more complex as more creatures die as a direct result of us. I think animals know everything that’s going on, I really do. They know so much about us.

The Truth Speakers: The Sea Of Silence is at Simon Lee until October 7
Read More