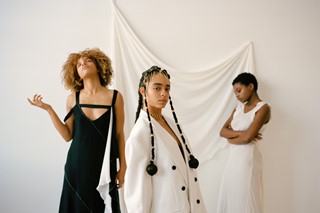 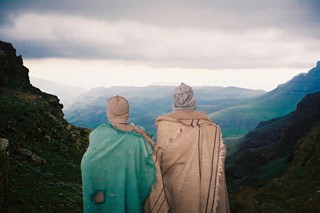 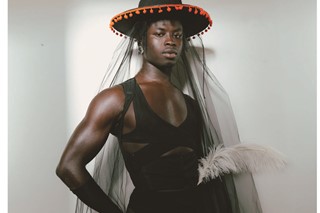 Campbell Addy is one of the most charming contemporary photographers you'll meet in the industry. As well as teaming up with Getty Images to diversify stock photography, running a modelling agency and working with brands like Levis, the Dazed 100 photographer and filmmaker was also behind one of 2016's most radical independent publications, Niijournal. Now the magazine is back for its second issue, and taking on a new contemporary struggle: black mental health.

Campbell's own determination to be honest about his emotions drives a beautiful ensemble of interviews, poetry, fashion editorials and political and cultural discussion. In a poem he wrote for the magazine, 19, he lays out his own struggles: "Aged 19 I realised my skin colour made my boyfriend's parents uncomfortable... At 19, I experienced true lonliness / It took 19 months to realise I wasn't okay." The magazine highlights the fact that in the UK black people are more likely to be diagnosed with mental health problems and more likely to be mistreated within treatment services.

“A lot of content is through connections that I've been drawn to emotionally, as opposed to ‘Will this sell?’ or ‘Will this be popular?’” – Campbell Addy

How did the idea to do your second Niijournal come about to start with? Was it always your plan to keep it going as an annual publication?

Campbell Addy: I had quite a lot of issues with mental health this last year and I just remember feeling very isolated in the sense that I find solace in a non-traditional way. I'm not necessarily going to look into, I don't know, Google to help me. People talk about mental health, but it's sort of scratching the surface. Or not even necessarily scratching the surface, but talking about it in such a clinical way. So I had the idea to do the next issue and I wanted to thread mental health throughout it, but not in an obvious way. A bit like how I talk about how we approach topics like sexuality and religion; it's there but it's not in your face. So, with Niijournal, that's sort of a common thread throughout.

What do you think it was that brought people to it in the first place?

Campbell Addy: Just the honesty in it. There's not much kerfuffle; there's not much glitz and glamour. It literally is what it is. I think also, our mantra of "Here to educate, not irritate," really resonated with a lot of people, because I know with a lot of my friendship groups in London and around the world, we're often told we're aggressive, or we're trying to force-feed people our issues. But we’re just trying to educate people and we're still not able to tell our truths without it being manipulated. There's a famous monologue on Solange's A Seat at the Table, where Tina talks about people saying: "Well we don't have a White History Month." But we're not saying that you guys don't have something; we're saying that we've had to assimilate. With Niijournal, for the first time in ages, I could create work without thinking about changing it for the audience.

How did you plan the content this time round?

Campbell Addy: I can't really do anything that doesn't directly affect me or have some direct link to me. I've tried to create things for creation's sake, but I think when it comes to things like publications or imagery, especially in the world we live in where everything is so accessible, you have to be very careful and very strategic as to what you put out there. Like, I met a lot of musicians this year, so there's quite a lot of musicians in this issue. But that's because I met them, not through saying "Oh, we're gonna do a shoot together". On a personal level, we connected in some way. The shoot with Kelela was 12, 13 hours. We purely sat there saying, "Let's create something to push us to the next level.”

And then, the same with Lu. I met her year before, shooting for Wonderland and we kept in contact. We both have Jehovah's Witness backgrounds, and she's just genuinely a nice person. Then Tyler Mitchell (the photographer) and I were talking online. A lot of content is through connections that I've been drawn to emotionally, as opposed to “Will this sell?” or “Will this be popular?”.

Did you know that Kelsey and Kelela were going to be on the covers?

Campbell Addy: Well, I shot Kelela a year ago. Then I'd always wanted to shoot Lu, and then I was with Kelela at her house, just chilling, and she said that she'd really love Lu to be part of the next issue, and I was like, "So do I!", because we’re all friends. I had this idea of sending her a camera of some sort, and then Kelela was like, "No, no, no." She wanted her to be shot on the same level as how I'd shot her, so I reached out to Tyler Mitchell. Kelela and Kelsey know each other, they've worked together, so it was quite a nice synergy to have them both. And they stood for everything I was talking about; it wasn't far-fetched. I can't wait to share the images with people. It's phenomenal. And the written piece that goes along with it; it's really in depth. Tyler interviews Lu and just talks about her, and her placing in the world (creativity, music), as a black woman, and also coming from the south in America.

You made a video reflecting your mental health to go alongside the magazine. Does it feel natural to you to be open about it?

Campbell Addy: No. Never. I'm comfortable talking, but emoting is two different things. I could talk to you statistically, and da-da-da-da-da, but emoting, I couldn't. I thought it was the same thing for a long time. But I also know I have to talk about it, as a form of therapy. The video helped, because I kept trying to simulate into different ways. I was like, “How can I portray my anguish?”

Do you hope Niijournal helps other PoC who are going through mental health problems?

Campbell Addy: I didn't realise the scope of lack of representation. After I dropped the first issue, I travelled and I spoke to people about it. People just don't get it. If you're of black descent, or of colour, you're 20 percent more likely to have a mental health issue. So by letting it reach more people I hope that it will give an insight, get people thinking. We talk about family members, abandonment, fathers, especially within our community. Trauma, how traumas are passed down. How important it is to stand by your images, and live in your truth. It's all these things.

And how do you look at race specifically in this issue?

Just like, it's ok for us to be alive, to be here, without it being such a big kerfuffle. Other magazines can portray musicians of whiteness without it being such a massive political stance. It just is. There's hope that with publications like ours it'll become the norm. Because right now it's just a bit annoying, with like, "Oh, so it's so cool and trendy". I'm not a trend actually. I'm a human being that lives in south London, just like you are. But people like to see us as trends, which is a downside. It's bittersweet, because you get the promotion. But then the downside is, you're literally seen as numbers, or click bait. Ways to make money. It's frustrating.

You've got a Kickstarter. Tell the fans why it's important to donate

Campbell Addy: Because, as we all know, it's hard out here for a young artist (laughs). Like eating a reduced-to-clear Tesco is not a look. But literally, I did Niijournal in my final year of uni. So I used some of my own student loan, and working on the side to pay for it. This time I wanted it to reach a wider scale. So the printed copy is larger, you get a lot more in it. So the Kickstarter is just there so I can reach that extra mile. A lot of people last time wanted to see the issue, and I couldn't send it to them as we sold out.

Contribute towards the printing costs of Niijournal here and watch Campbell's video below. Niijournal will hold an exhibition to bring its latest issue to life, hosted at Protein Studios in Shoreditch, it opens on 29 July and will run until 30 July