The British artist revisits the film that won him the Turner Prize in 2004, now soundtracked by dub and EDM legend Adrian Sherwood 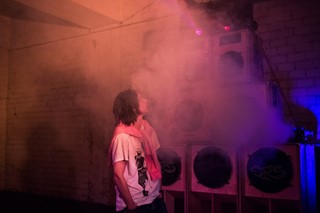 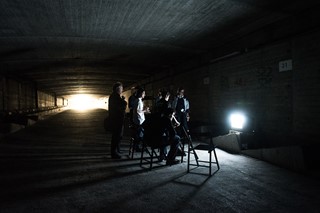 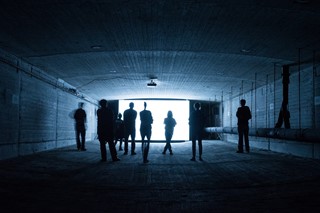 Jeremy Deller is one of the most avant-garde artists of our time. Self-taught and mentored in Warhol’s New York Factory, the British artist’s work embodies the mantra “Art as Life and Life as Art”.

Memory Bucket, the film that won him the prestigious Turner Prize in 2004, is still regarded in high esteem over ten years since its debut. The storyline? Capturing a bat colony leaving their cave in Texas – dancing in the setting sun, black swarms of bats circle, dip and rip through the sky.

What is ultimately unique about Deller is the way he often combines culture and politics into a gesture. For the 23rd edition of BRÜCKENMUSIK, the artist revisits the film that made him a household name, recontextualising it in accordance with dub music, a subgenre of reggae that uses echo, reverb, and panoramic delays – just as the bats do. In this case, with an exclusive soundtrack from dub legend Adrian Sherwood. The concept is rather austere but the effects of Deller’s work is anything but as he brings the awe of nature to the sound of Britain’s 80s underground – a dark time for politics with Margaret Thatcher as the masthead of the country but a prolific time for British youth culture. Which makes us think that perhaps, through “Send Bat Echolocation Sounds to Dub Reggae Producers”, Deller is not only revisiting a film he once made but also an era in which he grew up in.

Below, we caught up with Deller just before BRÜCKENMUSIK 23 opened and asked him to reflect on why he originally made Memory Bucket, why humans are nothing compared with nature and how bat echoes sound the same as early rave music.

“I like the apocalyptic narrative, the literal wonder of nature. Humans are nothing compared to these creatures” – Jeremy Deller

How did “Send Bat Echolocation Sounds to Dub Reggae Producers” come about?

Jeremy Deller: In this case, I was invited to present the film at the Deutzer Bridge, and took up the offer. How could I refuse? It's such a unique place – normally cut off from public use. The film itself is difficult to show so I normally shy away from showing it... 3D can be such a pain in the arse.

Is the film just one element of the show?

Jeremy Deller: Yes, it sits at the end of the tunnel. The work is in four different parts; you walk through the space in semi-darkness and in one room you see a glowing fluorescent bat portrait and in another a collection of videos of people who use echoes to survey their surroundings. The space is filled with a soundtrack produced by Adrian Sherwood the UK dub producer – it’s a very special track as it’s integrated with bat echo samples especially mixed for this project and it is the literal act of the title in practice.

How did the bats come about?

Jeremy Deller: It was destiny, to be totally honest with you. I love bats. I’m fascinated by them and I went to Crawford Texas to find this bat colony. My objective was to show the bats in a way that they would take over the space and the technology, to basically dwarf the human viewers, as they look on in awe. I like the apocalyptic narrative, the literal wonder of nature. Humans are nothing compared to these creatures. I want people to see the greatest in nature, in comparison to the stupidity of humans. The brilliant thing about nature is it just gets on with itself and it doesn’t care about us. Nature overwhelming technology was my goal, and at certain points of the film where it’s achieved you don’t know where to look, it's just chaos or what looks like chaos to the naked human eye.

Are you a pessimistic artist?

Jeremy Deller: Hopefully yes, I do my best (laughing).

Was the soundtrack by Sherwood also fate?

Jeremy Deller: Well actually oddly enough, yes. Because the film already existed I used this opportunity to build on the idea, re-contextualise, and, well, it became a bit of fun really. I had produced a print, a few years back, which was based on an idea I had – it simply said “send bat location sounds to dub/reggae producers” and this is basically what I have done. The poster became true.

When you listen to the sounds that bats emit, after transmitting them to a device, they have the same tempos and beats of early rave music to me. If we allow ourselves to tune into them we have a whole new set list by nature.

A lot of your work goes about unpacking and giving space for cultural anomalies. How does the representation of ‘the other’ function for you?

Jeremy Deller: I think, to be honest, now because of the internet everything gets attention – everything is known about. I think I go for obvious things mostly. I look at things twice, especially things people take for granted. But, to be perfectly honest, I don’t know what I’m doing. I’m revealing things but the viewer is the only apparatus that can really see something. I can’t tell you what to see, I work instinctively. I’m mostly an outsider and perhaps that’s why I make the work I do.

Take the Jamaican dancehall film I made, “Bom Bom’s Dream” I was purely an observer. I’m no expert. I worked with a professional Japanese dancer, but she was also an outsider to the culture (natively), but she made it her own – it was her dream.When we went to Jamaica everyone was so excited we were there, they all wanted to be seen – recording them was appreciating them. They want cameras there, they want to be as big as hip hop to go viral because that means wealth, fame, and fortune. People get worried when people go into cultures that they are not connected to, but I don’t profess to be a professional, my work is not about that – I just like the music.

Music and culture are solid themes in your work and increasingly well-used operatives for viral voices. With you being from the UK, the recent #grime4corbyn and Rize Up UK comes to mind, did this resonate with you?

Jeremy Deller: Ahhh yes. This was a huge thing that happened in the last weeks of the campaign – it was a phenomenon in the UK. Young black artists came out to support him... in fact, so many musicians came out to support him and he was on the cover of all the music magazines, even with heavy metal bands. For once in our fucking lives, the youth vote was crucial and it was activated through music in a way I have never witnessed in my lifetime. It's an exciting time. Corbyn was all over – he was at Glastonbury last week giving a speech. Kids love him he is pro-young people, anti-austerity but he's also pro-Brexit, anti-Europe which is a bit of problem but we don’t have any other choice at the moment.

Jeremy Deller: Well I don’t have a market or collectors really – I just have the public, the public is my public, that's who I make work for. You need to know your audience.