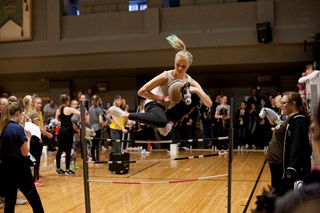 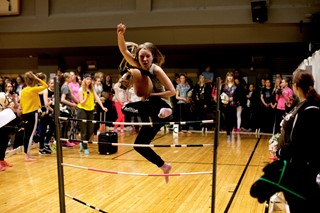 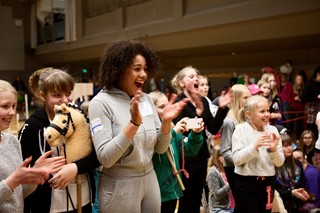 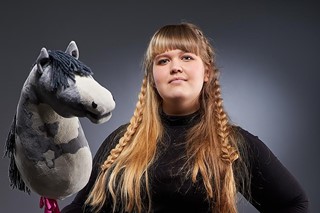 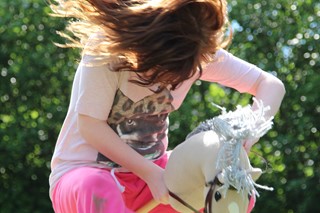 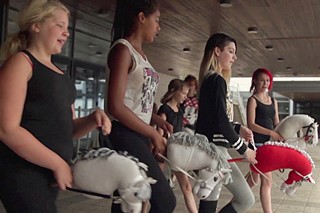 Of all the absurd cultural phenomena that have gone viral on Facebook, competitive hobbyhorse riding must surely rank among the very weirdest. Recently, a video clip of a packed championship in Finland clocked over 30 million views showing teenage girls cantering gracefully around a course and flying across metre-high hurdles – on stuffed horse heads mounted atop wooden sticks. “After watching this, I feel like a normal person again…” reads one of the top comments on the clip. “Used to do this around the bedroom when I was 5. Today it’s a sport,” reads another.

Hold your judgements, though, because hobbyhorsing is a Big Deal. There are 10,000 riders in Finland alone, mostly girls aged between 10 and 20. Hobbyists sew and decorate their own horses, and participate in show jumping and dressage competitions all over the country. The training and dedication that goes into becoming a great rider resembles low-key athletics, and many have built solid online followings making DIY horse videos brimming with teenage pathos. Some of the most revered veterans – such as Aisku, still in her teens – are even being paid to coach young riders in their local communities. It’s a geniune hobby that has kids connecting over a mutual interest, trotting far and away from the glowing throb of time-wasting apps.

This weird and wonderful world is the subject of Hobbyhorse Revolution, a new documentary by the Oscar-nominated Finnish director Selma Vilhunen. It explores the fast-growing hobbyhorse community through the eyes of three of its central riders – Alisa Aarniomäki, Elsa Salo and Mariam “Aisku” Njie – who have conquered parents’ divorces, foster homes and nasty bullying astride their no-legged friends. It turns out hobbyhorsing is all about fighting through by having fun.

“There is definitely a layer of humour to this activity. The hobbyhorsiests themselves see that too – they don’t take themselves so seriously” – Selma Vilhunen

“There is definitely a layer of humour to this activity,” says Vilhunen, who first discovered the scene in 2010 and began connecting with young hobbyists through online forums. “The hobbyhorsiests themselves see that too – they don’t take themselves so seriously. I really loved the combination of someone being so joyful and serious about something at the same time.”

Giving their horses names like “Haters Gonna Hate”, the film sees the girls come together to demand respect for the hobbyhorse. And let’s be fair: An activity that lets you delve into your own imagination whilst keeping fit and hanging out with your BFFs, really is far less weird than grown men who dress up as My Little Ponies or collect their own navel fluff.

“A lot of hobbyhorse kids also ride real horses,” says Vilhunen. “But most identify more strongly with their hobbyhorses because of the strength of the community. It’s all really empowering.”

We spoke to Alisa and Elsa about why everyone should find with their inner hobbyhorseist.

How did you first discover hobbyhorsing?

Alisa: I was looking for a horse game online and I came across a forum about hobbyhorsing. I found it so intriguing and decided to start making horses myself. Hobbyhorsing was a great way to do all the things I wasn’t able to do with real horses – galloping and stuff like that. And I could do it whenever I wanted.

Elsa: I had a friend who I always played horses or dragons with, and one day her mum gave us a hobbyhorse. The feeling of riding and jumping with it made me feel so free and happy! I got hooked immediately. It’s very different from normal horses – you have more control and you get to create the whole horse and its story. It is like art for me.

What makes a great hobbyhorseist?

Elsa: You can do so many different things in this community. You can sew horses, ride them, or you can become a great coach. You can even focus on becoming big on social media. The most important part is being really active – going to all the competitions and taking part in the community. That’s what the most popular hobbyhorseists do.

Alisa: It’s enough to find one aspect of the hobby and perfect it, people will really appreciate that. I was really good at making videos, and lots of kids found me a great hobbyhorseist through that.

“I have different relationships with each of my horses. My horse Trivoli, who is in the film, is one of my favourites. He’s like my soulhorse” – Elsa

The film shows how much of a personality riders give to each horse. Can you describe the bond you build with a hobbyhorse?

Elsa: I have different relationships with each of my horses. My horse Trivoli, who is in the film, is one of my favourites. He’s like my soulhorse. The summer that I made him I was really lonely, and he made me feel safe. The hobbyhorses feel like their own beings, they push you into your imagination. Of course, I know they are not real creatures, but through my art I can make them come alive and it’s the most wonderful feeling.

There doesn’t seem to be that many boys riding hobbyhorses?

Alisa: I think it’s quite sad, actually. It feels like boys aren’t allowed to do this thing that is considered to be a girly thing. At the same time, I think it also means we have a strong sense of feminism in this community. It’s a place for girls to do what they want. But the boys we do have are very much welcomed and included.

Some girls in the film have kept their hobby a secret for fear of being bullied. How has it been to suddenly have everyone talking about hobbyhorsing?

Alisa: It’s been really funny to watch people’s reactions. Many people find it so confusing and some even find it provocative. Others just laugh or want to get involved. I like the variety of people’s reactions. It’s kind of like hobbyhorsing – it includes so many different emotions. I can find it really funny but I can also take it super seriously. I went through a lot of bullying and for a long time I didn’t want anyone to know that I rode hobbyhorses, not even my family. But this hobby has done so much for me. I don’t really care what people think about me anymore, and I’m really proud of that.

“I really hope the people who bullied me have seen the film. I want them to see that it was wrong to put me down, that you have to accept people for who they are” – Elsa

What would you most like for people to take away from the film?

Elsa: I really hope the people who bullied me have seen the film. I want them to see that it was wrong to put me down, that you have to accept people for who they are. As long as you’re not hurting anyone you can do whatever you want.

Alisa: I want people to find their inner hobbyhorseist, so they can use their imagination and express themselves without worrying about what society expects them to do.