Richard Prince, Sally Webster, George Horner and Jack Pierson are a few of the works in a collection that Clark admits could have filled the gallery twice 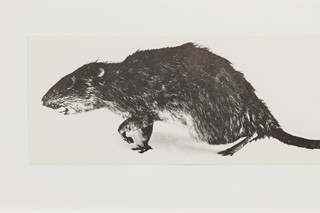 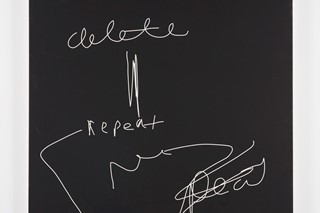 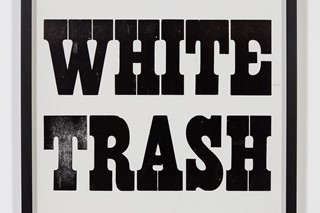 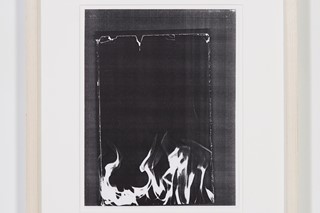 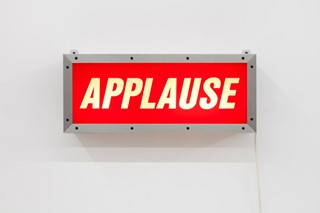 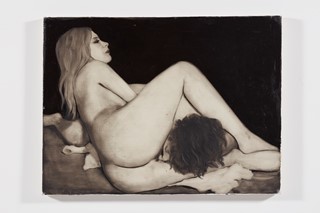 “People are boring unless they’re extremists,” Jenny Holzer exhorts from a laundry list of aphorisms she made in 1978. Her words perfectly describe the spirit of artist, filmmaker, and writer Larry Clark – and his obsessive passion for collecting. Since his first girlfriend gave him a portrait she made of him in 1961, Clark has amassed a vast panoply of art, objects, and artifacts that he keeps piled up in his Tribeca loft, creating a warren of glorious stuff.

“You should enjoy yourself because you can’t change anything anyway,” Holzer notes on that same list, which is one of the many works in White Trash, an exhibition culled from Clark’s collection, now on view at Luhring Augustine, Brooklyn, through June 18. As you stroll through the show, you feel the pleasure, the pain, and the poignancy of the works that have called to Clark over the years.

“Learn to trust your own eyes,” Holzer advises as you proceed through the show, taking in works by Helmut Newton, Andy Warhol, Richard Prince, Raymond Pettibon, Jack Pierson, Jeff Koons, Mark Gonzales, Max Blagg, and Ralph Gibson, to name just a few. White Trash becomes a visual memoir of Clark’s travels on earth – but it is the presence of his studio door, which stands perpendicular to the wall, feels the most intimate and sacred object in the entire show.

“Slipping into madness is valuable for the sake of passion,” Holzer concludes, and you can’t really argue that sentiment while standing in this room. There’s much to be said for letting desire lead the way. Clark speaks with Dazed about his unconditional love for collecting, and the power of living with art.

“I guess what I am saying is: I have too much stuff” – Larry Clark

The show is fascinating. I don’t know you but I know your work. Seeing your collection was like seeing another side of you.

Larry Clark: I never collected for value at all. It was just work that spoke to me that I had to have.  Some of the work is now quite valuable. I bought it off the walls of galleries when I had no money and I really had to scuffle to get the money.

I bought the little Mike Kelley photographs. I remember having no money and having the chance to buy those. They belonged to the gallerist. It was like: I had to have them. I remember borrowing money and maxing out twelve credit cards and using my rent money and buying those little photographs because they spoke to me.

When did you realise collecting was in your blood?

Larry Clark: Now that I’m putting the show together and pulling everything out – I don’t think I’ve ever thrown anything away. My studio has always been a pigpen, a mess, just totally filled with stuff. A few weeks before the show, you could hardly walk through it. There was a little pathway winding through all these stacked boxes and it’s only half cleaned out. But it’s always been this way. Even if the loft has been cleaned out and stuff has been put into storage, within a few weeks it’s filled up again. I’m to the point now where I say, “Oh man, don’t ever buy anything again!”

What was the process for deciding what you wanted to show?

Larry Clark: I showed everything that I could put in the gallery. There’s more work but some of it just didn’t fit and we just ran out of room. We could fill up the gallery again with just posters and ephemera and flyers.

From what I was looking at the other day, I could do an exhibition of just Sex Pistols posters and stuff from way back then. The poster from the Paris show is the first time they played outside of London. Malcolm McLaren did that with Jamie Reid. I have that one, and the Yale University Library has one, and that’s all there are.

There’s a lot of those things in the show. I guess what I am saying is: I have too much stuff.

What do you think it is that possesses you to collect?

Larry Clark: I don’t know. I think in my case, it’s just in the blood. I never collected to sell things, as an investment that becomes more valuable. It just never occurred to me. It’s now a fairly new phenomenon, the way you see artists pulled out of the art world into the bigger world with these incredible prices and that’s all collectors raising the price. Then it becomes who the collector collects. It gives status to artists, which is odd.

Do you find that collecting art influences you or impacts you in any way?

Larry Clark: You really want to live with the work and I have found that the work I really want to live with doesn’t influence me but it inspires me. It really gives me inspiration. The Christopher Wool painting that I had; it’s on the wall and I got up every morning for 25 years and went over to the painting and looked at it and it would give me inspiration, if I was ever depressed, no matter what. If I was suicidal, I would look at that painting and I would be okay. (The painting was like:) “I can do that. I can heal you and make you okay. I can make you well. I can inspire you.”

Now I’m 74 and you can see your friends passing on… I never thought of the question, “Would you want to live forever” but it came up. And I thought,” Why would you want to live forever?”… Because of art. That would be why. I think I was talking to Richard Prince about it. You want to see what the next generation of artists is going to do. I guess there comes a moment where you wonder what art is going to be in the future, what the kids are going to be doing, where it’s going to go and that’s endlessly interesting. Nobody knows.

You look at the younger artists and you wonder. The last piece I bought, I was in Tokyo and I bought the Scott Myles at the Rat Hole Gallery. Scott Myles had his first show out of Scotland and the big relief painting was there, and I walked in and was like, “Wow man.” It spoke to me. I had to have it and I bought it and for the first time I thought, “In 20 years, this painting is going to be an influential painting.”

You develop a relationship.

What I find phenomenal about art is: it doesn’t change, ever. But you do and so your relationship with it changes so that something new is happening even though it stays exactly the same. Are there any in particular in the show that stand on that emotional level, that have become… I think of them as friends.

Larry Clark: Yeah, yeah, yeah. Oh so many of them do. The little small Christopher Wool painting FEAR – that’s a great one. THINK also. You look at those two paintings and just the words and the meaning of the words are enough, Especially FEAR. Any problems that one might have are fear-based. I look at FEAR and… okay.

I have a personal relationship with a lot of the paintings, drawings, sculptures. So many are memories of artists that are gone. The (exhibition) poster of me looking at the little Mike Kelley on the wall in the studio. I was thinking about Mike and missing Mike a lot this morning.