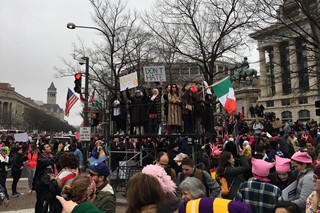 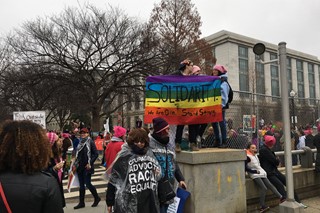 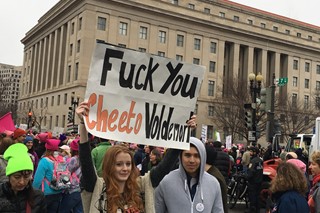 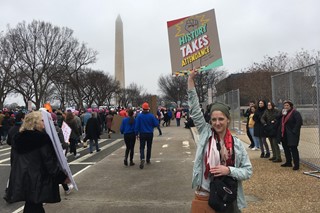 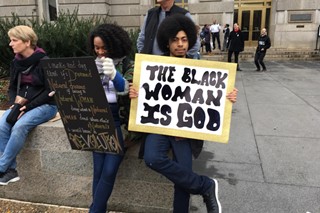 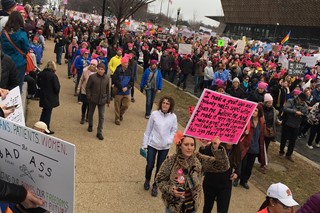 Even having opened hours early, Washington’s metro system was overwhelmed by the sheer number of demonstrators headed into the city yesterday. However, despite queuing in a hot press of humans for over twenty minutes just to leave the Navy Memorial station, protesters were jubilant.

The cramped crowd chanted while they waited to leave: “Tell me what democracy looks like – this is what democracy looks like!” Strangers befriended one another, and shared snacks and water with the elderly and the claustrophobic. A demonstrator squeezed in the throng turned excitedly to her friend and said: “You would not be able to internalise this just seeing it on the news.”

City officials estimate that 500,000 people took part in the march, easily doubling the number of attendees at President Trump’s inauguration the previous day.  Even the outermost stations, like Shady Grove, had protesters lining up for an hour at one point just to board a train.

The joyous, sometimes messy event featured a variety of women’s causes for which Trump’s presidential platform has given cause for concern.  The different contingents featured issues and movements that included reproductive rights, advocacy for rape victims, Black Lives Matter, transgender and queer rights – and mournful Hillary Clinton supporters. One group of demonstrators led the chant “science matters”, in response to Trump’s pledge to scrap NASA climate research.

“City officials estimate that 500,000 people took part in the march, easily doubling the number of attendees at President Trump’s inauguration the previous day”

But while the march was unified in its condemnation of Donald Trump’s deeply unpopular sexist attitudes and a platform that is regarded by many to be anti-women, criticism of the event left unanswered questions about just how unified it is.

“There’s too much white feminism out here,” said Emily, who had travelled to the march from Virginia. “All these signs about ‘all women’ this and ‘all women’ that – as if the oppression white women face is equal to that of black women.”  There was acrimony leading up to the event when the DC chapter of Black Lives Matter reached out to them to see how they could help, and disgruntled activists claim that Women’s March organisers responded by asking them to be in charge of the portable toilets.

Some also expressed concern that the inclusion of transgender rights was lukewarm. While organisers were firm on trans inclusion from the start – with a headline speech by trans activist Janet Mock received warmly by her audience – there were participants who complained that all the attention drawn to Trump’s ‘pussy-grabbing’ comments only lent support to cisgender women.

“There’s this kind of transmisogyny here, saying a vagina or a uterus is what makes a woman,” said an activist who asked not to be named.  She echoed the thoughts of many LGBTQ supporters both present and online who worried about the way trans women may have been tokenised and sidelined. She added: “Trans women get sexually assaulted, they get paid less than men, they get shunned by their health insurers.  This is about more than just your pussy.”

Kae, from North Carolina, said: “I know I should feel happy being here and seeing this, but as someone who identifies as non-binary I don’t feel like this march is about me.”

Different signs and chants hinted that there was a subtle generational gap between the political attitudes of younger and older demonstrators. Many of the over-40s on the march held signs that supported a single issue or a candidate (mainly Hillary Clinton, Bernie Sanders, Jill Stein, and “Obama cared”); or made an explicitly patriotic message or chant, such as “protest is American”.

Younger participants, though, were more openly critical of the system at large.  “End patriarchy”, many read, with others reading “stop capitalism,” and one “a corporate coup d’etat.”  They were also less anxious about centring African Americans in their messages – one man in his twenties carried a sign that read “the black woman is God.”

Despite the internal tensions of the march, there was nevertheless a cordial (even amicable) relationship between different cohorts, who were openly content to admit differences and celebrate the commonality that existed between them. Washington-based journalist Sam Knight put it best. “Plenty of messaging I disagreed with,” he tweeted. “But to see that many people take to the streets to oppose the radical right... (it was a) beautiful show of force and solidarity.”