It’s so important that we keep talking about depression, keep telling people’s real stories. The fact is, it’s killing people. We’re publishing this article to raise awareness around mental health and to pay tribute to a wonderful person and dear friend. Before Matt died he wrote a candid and honest account of his own struggles with depression in the form of an open letter. Please join us in remembering Matt the right way and read his open letter that he wrote to the world. Visit CALM for support regarding suicide and call Samaritans on 116 123 if you need to talk.

It’s deeply unsettling to read about someone you knew and loved in the newspaper. Not only because the person is a friend who killed himself, Matt Irwin, and there’s been an inquest into his death. But because the Matt Irwin whom the tabloids are describing, as some celebrity gay party guy who catapulted himself into drugs after being spurned by a lover, is a man who never existed at all.

The Matt we actually knew was the one who loved Kate Bush songs so much that he asked us to play six of them at his funeral. The one who never stopped adoring the indie bands from his youth, like Slowdive and Garbage, and who spent so many weekends up in Yorkshire at his friends’ mum’s house. Just walking in the fields or curling up with their dogs in front of the fireplace, and reciting all the sarky and sick jokes from the sitcom Nighty Night. The Matt we knew often told me about his sister who had children young, then wrote a book, and how it was being serialised on Radio 4. He was just so proud of her. What we didn’t know was that Matt found it impossible to tell his friends just how sad he really was, even though they loved him unconditionally and endlessly. He grew up in the Mormon church in Devon, not an easy place for a gay boy who didn’t believe, and who felt rejected by that faith. He felt that, growing up in a cult, he had never learned how to deal with real life, as he explains in his suicide note. It breaks our hearts that he felt he couldn’t ask for more. Ask for help.

Back when we were students, the Matt I knew used to stand outside Trash nightclub with me, every Monday night, freezing our tits off, clipboards in our hands, asking people for their email addresses, which would be things like “sparkerlybabe69@tesco.net”. Soon we had invented a private language wherein we spoke to each other only in really, really shit email addresses. One night a girl was so drunk that Matt had to refuse her entry. “YOU,” she said, swaying over the barrier like she was about to punch me, “can’t even HOLD A PEN PROPERLY.” Over the next ten years, Matt made his name as a hugely successful photographer for magazines such as Dazed and Vogue. I became a journalist for the Guardian. Whenever we saw each other, we would rush up to each other and bellow “YOU CAN’T EVEN HOLD A PEN PROPERLY” before collapsing in lolz. And I say lolz, because Matt would have said lolz. Matt was lolz. We miss him so horribly, horribly much.

To read the letter on mobile, please click here. 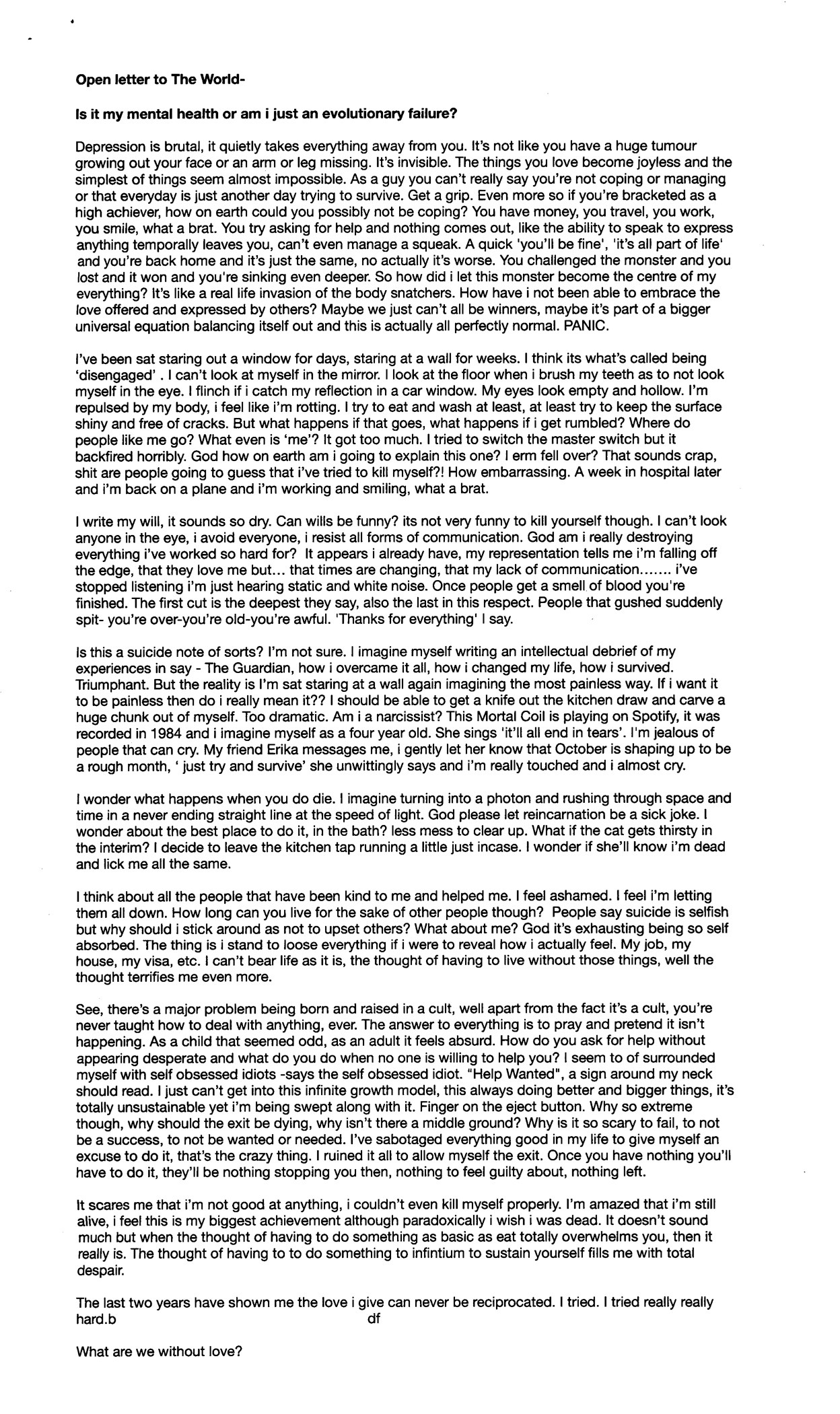