In just six months, Bbz has set up all-inclusive collaborations, a soon-to-be radio show and a helluva lot of parties – and even the cis white male is welcome* 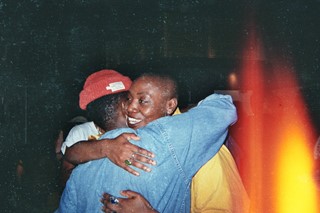 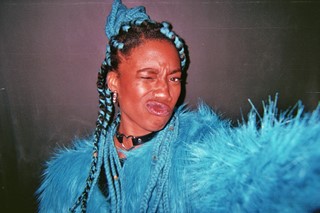 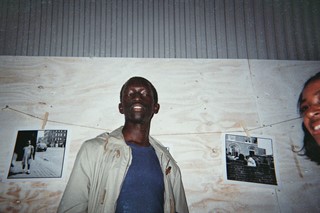 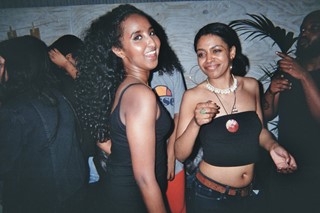 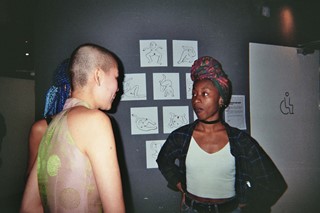 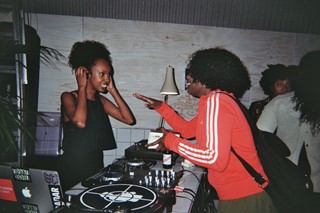 “I know that a lot of our friends consider us black weirdoes; people of colour who don't necessarily fit a certain mould or conform to a certain type of blackness. We wanted to create a space that embodied that.” Nadine Davis is talking about the reasons she set up Bbz (Burgeoning Brazen Zamis or Babes) alongside her partner, Tia Simon-Campbell, six months ago. Bbz, a night self-described as “a monthly exhibition/tun up for the fam, exploring the works of queer, non binary women of colour”, brings together different artists of colour who identify as female to exhibit and sell their work. At a time when issues of race and sexuality are becoming ever more loaded, the power couple are forging a worldwide community for people who are often painfully underrepresented in the creative world – namely queer women of colour. More than that, however, the duo are creating IRL safe spaces and a support network – something desperately needed as we live more and more of our lives online.

The south east London pair behind Bbz have their fingers in a lot of pies. They collaborate with collectives such as Born N Bread and SIREN in the UK and BUFU (By Us For Us) in New York, and digital (soon to be print) platform GAL-DEM. Their radio show supporting women of colour within music is due to air on Radar Radio next month and they’re preparing to throw a party for the Bbz six month anniversary in September. On top of all of this, they’re also throwing a rave in Peckham tomorrow – in collaboration with Magic Clit. Ahead of the event, described by Simon-Campbell as “more of a bump and grind, down and dirty lesbian vibe than is usual for Bbz”, we pinned the two polymaths down to find out more.

Why did you set Bbz up?

Nadine Davis: I came out pretty early. I was going clubbing and realising I wasn't really mirrored in those spaces. It was just very binary, very heteronormative, in the way that people carried on like: “you need to be a stud or a femme”. I was neither, so I ended up staying away from those environments. As I got older and started to travel, clubbing became my way to meet people. It was really when I was in San Francisco, which is like the mecca for gay clubbing, that I was like “Why is there nothing like this at home?” When I got back, I complained about it for so long that Tia was just like, “Let's just do it then! Stop chatting shit and let's hold a rave!”

At the time I think “safe space culture” was something that was on my mind a lot.

Whatever race you are – I wanted to create a space that gave people a place to be individuals in whatever skin you live in – queer bodied or not. But centring around queer generally, because I find that if I go to other parties around town, I don't meet like-minded folk and I don’t necessarily feel comfortable. I’ll often feel a bit fetishised, a bit tokenised, and the promotional images from those parties... I don't see myself there. So Bbz came about in order for us to have a space away from all that.

Tia Simon-Campbell: I've always grown up in areas that have been predominantly white, and I think it kind of made me crave a space where I could interact with other brown bodies. For me, Bbz was a really good way of meeting like-minded people and making friends. Not just having a fleeting interaction with someone but actually forming proper relationships: being able to walk away from the experience with somebody's number and go out for dinner with them and actually make a friend. All of our Bbz crew knew each other online, but nobody actually connected IRL. Bbz is a space to build a community that's there to support you completely.

Who makes up the Bbz community and what’s the reaction been like in London and further afield?

Tia Simon-Campbell: It’s been more of a friend-of-a-friend thing, which is perfect because it means that all of the right people are coming to the parties. As our online presence has grown, we've connected with a lot of other female and queer, non-binary collectives from all over, predominantly America. Everybody’s been really open and warm. I think that's come as a result of our attitude – we try celebrate and big-up as many other female collectives as possible. We make sure we're promoting and sharing the community to make it wider. We don't ever want it to be “sceney” – there is no kind of scene. There is no competition. We want to lift everybody up who's doing a similar thing to us.

Nadine Davis: And collaborate as much as possible. We're already in talks with Pussy Palace and Magic Clit and other collectives like Born N Bread and SIREN. We're all just about extending the hand.

Why do you think collectives like the ones you’ve mentioned and others like GAL-DEM and Art Hoe Collective have emerged recently?

Tia Simon-Campbell: I think that everybody realised these things didn't exist and it was like, “why?” If nobody's making it, we need to make it for ourselves. Everybody's on this similar wave of “we need to make shit happen now”.

Nadine Davis: As young, black, queer girls we’ve never seen ourselves mirrored or represented in certain spaces and we’ve been trying to fit a mould so we could be in those spaces. Never really knowing myself, feeling independent or living up to people's expectations of me – that left me feeling constantly exhausted. I'm tired of sitting at home with my girls or having to put myself in a corner. I’m tired of having to be a certain way in one environment and another way in another. I think we’ve all just reached an age where we’re like “that is so long!” All of these movements are about creating platforms and safe spaces where you can be yourself.

How important is that for young people now?

Nadine Davis: The younger generation have started to look at themselves after seeing us do what we do. They weren’t having conversations about their hair, their bodies, the way they walk through the world – and now they have spaces where that's all being talked about.

Tia Simon-Campbell: What was I doing at 16?! I had no idea about female identity, what it means to be a woman of colour or just living as a woman in our day and age. I couldn't have articulated what it meant to be a feminist. I had no idea how to talk about that. It's incredible that, even though we're only 10 years older than the next generation, the conversation is being had. That's magical.

Do you see a difference in young people who identify as women now?

Nadine Davis: They are brazen. They are so bold. The majority of girls doing this stuff are aged 18-21. When I was that age I was such a confused young human. I didn’t have the same stance or such strong opinions. With these platforms and conversations existing, it gets you to think. It’s definitely bred a much stronger young woman – and everybody’s online now. Without that space none of this would be happening. As much as I love word of mouth and keeping things organic to maintain the ethos and the vibe of the party, the internet is a wonderful tool. To be able to reach out to people and say “Yo, I see you. Can you come here? Can we do this?” is amazing.

What do you say to people who might call Bbz an exclusive collective?

Nadine: A girl I knew, she was like, “I feel like it's anti-white, it's racist, I don't feel comfortable there, how would you feel if there was an exhibition just for white girls and you couldn't exhibit?” And I'm like, “babe... that's errday!” It's really not that deep though. The thing about Bbz is that it is inclusive. It's not an exclusive party or exhibition. Yes, you can only exhibit if you identify as a woman and you are of colour, but it's not a space that you cannot enter. For so long non-white cultures have been accessible because of marketing and the way they've been appropriated. So when it's taken back, people feel excluded – but that's not the case at all. As long as you respect that this party is celebrating a particular type of individual then anyone can come. A lot of parties turn away hetero white men and such, like “Oh it's a private party”, and we're like, “nah – you can roll through – as long as you’re respectful and you don't make anyone feel intimidated”.