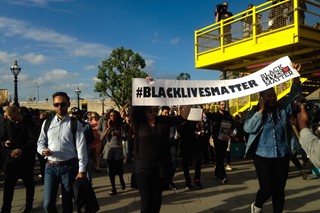 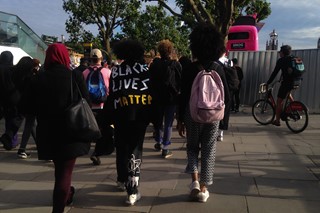 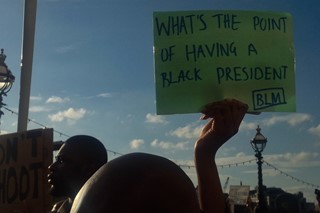 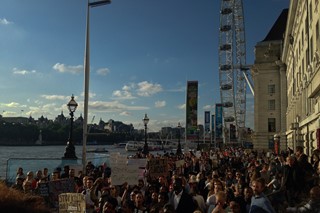 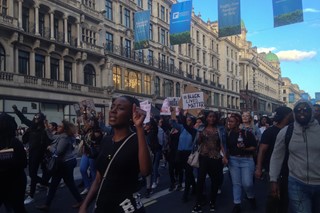 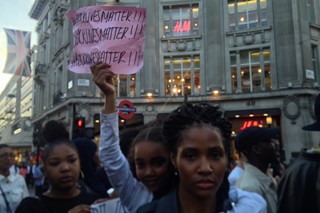 Thousands of protesters shut down the streets of central London in a last minute #BlackLivesMatter event, demanding an end to police brutality after the horrific deaths of Alton Sterling and Philano Castile. What began as a small gathering in Southbank soon snowballed into a march that brought traffic to a standstill.

Sola Oluode and Aimee Martin-Accoroni were two young activists who turned up to the event after seeing it on Twitter that morning – they had handmade their placards on the bus. “I felt like it wasn’t enough to just share something on Facebook,” Sola said, “I wanted to get out there, get in the media’s face and say ‘we are upset, we are angry and we are not going to stand for this anymore’.”

“It’s important that we recognise our right to democracy,” Aimee added, “especially our freedom of speech. It’s easy to become passive when it seems like we are consistently failing, but this is the time when we need to show that we are not giving up.”

By 7pm around fifty people had gathered in the area, talking and attracting some surrounding spectators. Despite small numbers, tensions were beginning to rise – “I was here protesting in the seventies!” shouted one older woman, “why am I still here? They are still killing us.” After a short while protesters decided to take action and march. Chanting “black lives matter,” they turned and started walking towards Westminster bridge.

The area was rammed with tourists and city workers, making it a peak time for protest. As the march headed towards parliament, many of the onlookers began to join in – by the time that they had reached the Westminster bridge, the march had quadrupled in size.

People from all walks of life joined together in solidarity. Some arrived with drums and speakers, mum’ pushed kids in prams, toddlers held placards and shouts could be heard bouncing off the buildings of Parliament Square.

When the march reached Downing Street, several police vans turned up. A group of people with a ‘#BlackLivesMatter’ banner led the way, while hundreds followed holding signs that reading “we can’t breathe”, “end police brutality” and “stop killing our black men.” From here the mass moved to Piccadilly Circus and Oxford Street, growing in numbers by the minute. Some large stores closed their doors, with the unlikely fear of the protest turning violent. “They were literally locking the shops down,” one member of the group said, “it’s racist, I’ve been to protests where there were mainly white people, and they don’t do that.”

Passing cars and buses honked their horns in solidarity while the moving crowd cheered back with them – a collective power, anger and a desire for justice was palpable. At one point on Regent Street, activists got onto their knees and raised their hands into the air. Halting their chants for a moment, they stopped to remember the horror that has unfolded in America this past week. During this silence the heartbreak of London’s BME communities was impossible to ignore.

The march finished three hours later, at the American Embassy. Once here, a man stood on a bench to speak to the thousands in the crowd – “this is where this specific protest ends,” he shouted, “but we cannot let the movement end. Don’t let it stop. There’s a system in place to destroy us, but there’s been an awakening in our people.”

The original organiser of the event also made herself known, addressing onlookers while she sat on the shoulders of a friend. “I’m so thankful to everybody that came here tonight,” she said, “I’m so happy that we can come together, and unite and bring prosperity.” Music resumed and the crowd danced, beginning to disperse as a police helicopter flew overhead.

“We literally got here towards the end,” explained one activist – Sogand – as the march began to break off, “we didn’t realise there was going to be a big protest like this, but it was all over social media and being livestreamed on Periscope which made it easy to find.”

“I saw a lot of people online saying that there was no use in it because we aren’t in America, but we are showing unity and solidarity. It’s not just their problem to deal with alone”

“It’s amazing,” added her friend, Precious, “I saw a lot of people online saying that there was no use in it because we aren’t in America, but we are showing unity and solidarity. It’s not just their problem to deal with alone.”

Another activist, Amie Wolfe, illustrated the pain felt by the black communities of London. “There’s a collective feeling that we’ve all been having lately,” she said, “but this has been going on for a long time, black people in the UK have been feeling like this for years. We do feel oppressed.”

“There is a fear of not being heard,” added her friend, Esther Adjei, “but when we do make an effort to get up, we will be heard. Today, everybody was turning their heads as we went past – if we make enough noise, they have no choice but to listen to us.” With anguish in her voice, the expressed to keep the movement alive. “And involvement shouldn’t just be limited to those who are experiencing the oppression either.” she said, “it’s exciting to see that we are not the only ones who see the problem. We need to keep going.”