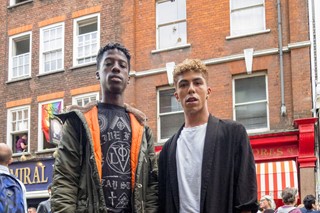 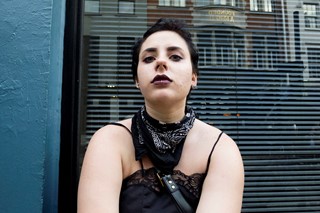 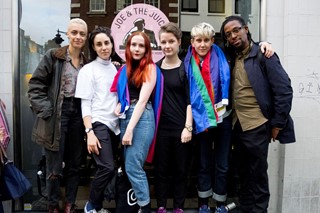 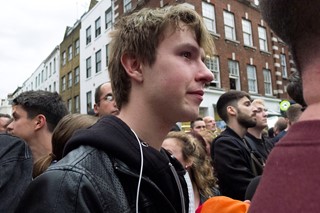 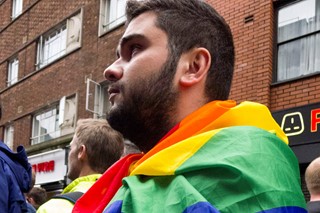 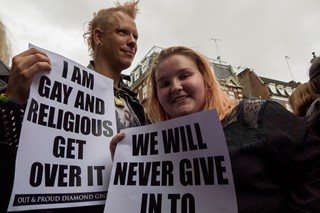 Last night, London’s extensive LGBTQ community swarmed the streets of Soho in an emotional vigil dedicated to the victims of the Orlando massacre. The mass shooting took place just two days ago, claiming the lives of 49 innocent victims and seriously wounding 53 others. Despite what mainstream media may say, this was a hate crime. It was an attack on a gay nightclub which represented a safe haven for Orlando’s LGBTQ community and a crippling blow to gay rights which has been felt by queer communities worldwide.

Despite an air of overwhelming melancholia, the overriding message to be uncovered on the city’s Old Compton Street was one of solidarity in the face of oppression. “I don’t feel angry, I feel defiant”, said Aldo Williams, a gay local that came with a canine companion to put smiles on the faces of strangers. “I thought I was going to be the only one here, especially with the rain, but I was blown away by the amount of solidarity we’ve seen. I feel connected and I feel powerful. I feel hopeful.”

His spirit of defiance was echoed by Wayne David, founder of LGBT support charity RUComingOut, who said “I will remember today for the rest of my life. There are so many emotions; there is sadness, pride and a determination to keep fighting for acceptance and equality. Today was about showing solidarity with Orlando but also about appreciating the freedoms we have here in London and the importance of protecting them”.

This spark of optimism was tangible in the flashes of colour littered throughout the vigil; there were rainbow flags emblazoned with messages of empowerment, flamboyant outfits which indicated a spirit unwilling to be stifled and dozens of coloured balloons released in a symbolic tribute to lives lost. These brief yet poetic glimmers of hope were enough to reassure photographer Alice Zoo that promise remains – “the LGBT community won’t be silenced. An act of terror like this isn’t going to scare anybody into staying away from places like gay bars.”

The tragic Orlando massacre may have become the catalyst for this wave of LGBTQ solidarity, but the truth is that gay, queer and trans people are murdered on a daily basis. “We, as LGBTQ people, are aware of violence every single day”, argued bisexual woman and writer Biju Belinky. “From a political standpoint, this shows that bodies that come from hate crimes continue to pile up. It’s time to stop just talking and start recognising what you can do to help – support trans people, bisexuals, gays and Latinos; support everyone who might be at the mercy of a hateful bigot with a gun”.

It’s undeniably true that this attack reveals that there’s work to be done before true liberation becomes a reality. It’s relatively well-known that trans women – specifically trans women of colour – are disproportionately susceptible to attack and often murder for their gender identity, but it may come as a surprise to many that 73 countries worldwide still class homosexuality as a criminal offence.

Writer Tom Rasmussen was quick to allude to the global nature of queer oppression – “Things like (the Orlando massacre) are happening to LGBTQ people all the time, but we ignore so many atrocities. I guess when it’s something that’s really relatable, like a gay space in a Western world, this feels closer to home. But I feel sad, angry and confused as to why gay people have to constantly forgive people all the time. It’s unfair.”

Nik Thakkar shared this sentiment, stating that his attendance at the vigil was to pay tribute to all global victims of hate crimes. “To me, this is a demonstration of our support not only for the Orlando massacre victims and families and the LGBT+ community but a chance to reflect on the countless lives lost on a daily basis (not only in the Western world) due to persecution, discrimination and war – the lost lives that there are no vigils for.”

The sobering truth is that many queer Western millennials – myself included – have been fed the illusion that progression is slowly being made in our fight for equality. Remember last year when your entire friends list superimposed a rainbow flag upon its profile picture to celebrate the legalisation of gay marriage? The fact is that legal progress is only one element of the battle. “Hate crimes still exist because these killers are a product of society”, says Belinky. “All you have to do is go on Twitter straight after the massacre to see that people are already making jokes, they’re celebrating the shooter. Then, the same conservative politicians that are making trans lives hell with the ‘bathroom debate’ in America are there tweeting a rainbow heart. This is our reality.”

Belinky’s words underline one depressing truth – many large-scale news outlets are refusing to classify this as a hate crime against queer individuals, instead describing it as an “attack on fun”. Owen Jones quickly went viral last night when he stormed off a Sky News paper review, clearly frustrated by the complete refusal of his two fellow reviewers to acknowledge Orlando as a gay hate crime.

An even more depressing truth is that bigots are using the attack to fuel their own Islamophobic ideologies. Williams was quick to point out that many will use this most recent example of terrorism as an excuse to align themselves with Trump’s bigoted views – Williams even went so far as to say that he was in fear of “complete control”. Belinky supported his point, arguing that “the aftermath discussion of this shouldn’t centre around generating more Islamophobia but around the importance of safe spaces and the protection of LGBTQ people”.

“It’s time to stop just talking and start recognising what you can do to help – support trans people, bisexuals, gays and Latinos; support everyone who might be at the mercy of a hateful bigot with a gun” – Biju Belinky (writer)

One of the most reassuring discoveries made at tonight’s vigil was that an organisation entitled LGBT+ Against Homophobia was using its opportunity to remind us all that these were the acts of a single radical and do not, in any way, reflect upon the religion of Islam in any way. “Murderous homophobes, from any religion or none, do not represent entire communities,” a representative said. “If we allow ourselves to be divided now we will be weakened in our fight to eradicate oppression – a fight that now more than ever needs to continue”.

The message was simple. We need to unite and come together in solidarity as opposed to fueling hatred or reacting with fear. What was refreshing was to see a diverse blend of individuals – there were trans women, non-binary individuals, gays, bisexuals, lesbians and straight allies all united in their desire to stand up against this hideous threat that now looms over the queer community. Belinky argued that this show of solidarity could actually remind youngsters coming to terms with their sexuality that the LGBTQ community is one of the world’s most accepting – “The fact that we can show ourselves as unafraid, queer, supportive, alive and loving might mean so much to someone in a horrible environment. This vigil shows we’re not scared and we won’t be bullied – we are always ready to love more people and fight the hate.”