After her Mad Max breakout, the former model is confronting her past head-on in The Neon Demon – she tells us how she anchored Nicolas Winding Refn’s ferocious fashion horror

Taken from the spring/summer 16 issue of Dazed. Watch an exclusive behind the scenes video of The Neon Demon here.

The parable at the core of The Neon Demon – Nicolas Winding Refn’s forthcoming eyepopping, hyper-saturated horror film about LA models – is loosely based on the tale of Countess Báthory, the 16th-century Hungarian noblewoman who purportedly tortured and mutilated the bodies of 650 young girls, bathing in their virginal blood to maintain her youthful appearance. “A lot of it is down to something that I find very interesting, which is this: (a) the obsession with beauty, and (b) the value of it – the currency,” said Refn on set last year, calm and focused amid the chaos of a fictional fashion show. “The last dawn of man has risen, and continues to rise, but the longevity of beauty shrinks. So (the value of beauty) grows higher and higher, yet (the window of beauty) grows thinner and thinner. Within that sphere, there must be some kind of insanity.” 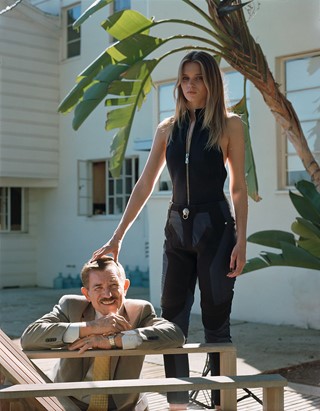 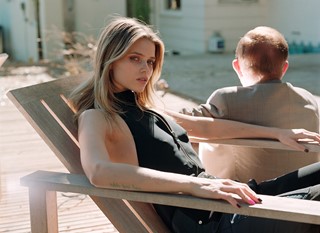 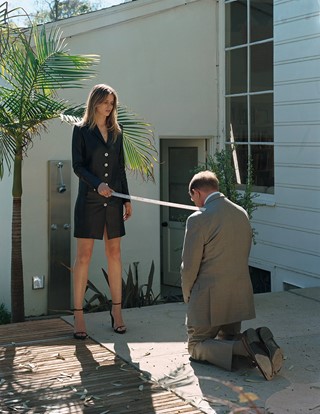 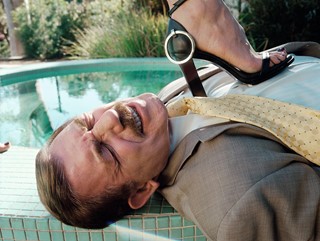 Enter Abbey Lee. Having left behind her decade-long modelling career, the actress formerly known as Abbey Lee Kershaw is now facing the challenge of her life: how to confront her past life head-on in The Neon Demon. She plays Sarah, an ageing model whose obsession with innocent, arresting industry newcomer Jesse (Elle Fanning) drives her to bloodletting extremes. Is Lee anxious that her ex-colleagues in the fashion industry will scrutinise her role? “They 100 per cent will,” she tells me in a gravelly Aussie accent. “And I fucking hope that my performance is good enough to shut them all up. I guess we’ll see. I wanted to not only do my character justice, but for the film to do the industry justice, and I wanted it to be right.”

“I fucking hope that my performance is good enough to shut (my former fashion colleagues) up. I wanted to not only do my character justice, but for the film to do the industry justice” — Abbey Lee

For Lee, who was discovered as a model when she was 16, The Neon Demon symbolises her coming full circle after years feeling creatively unfulfilled: before her switch to acting, she gave performing in her then-boyfriend’s band, Our Mountain, a shot, and set up an art studio for her abstract paintings. But, as she explains, it was actually more difficult for her to take on a role so close to her experiences – to confront the fashion industry as an actor. “My ten-year modelling career all of a sudden being put up on screen for everyone to judge, it was very terrifying to take on that role,” she says. “And to play my old life in my new life, but not really me, and be judged in my performance… It was very hard for me to wrap my head around.”

Sitting opposite me in a Silver Lake cafe on this toasty LA morning, Lee describes how she was actually somewhere in the harsh surrounds of the Namibian desert, some three years ago, when she realised she was exactly where she’d always wanted to be. “I’d never thought about acting before really,” she says of her breakout role in last year’s Mad Max: Fury Road, the film that saw her go to Africa for six months to play The Dag, the most contemptuous of the villainous dictator Immortan Joe’s harem of wives. “As soon as we started shooting, I was like, ‘Ah, this is exactly what I’m supposed to be doing.’ I was always envious of people who knew exactly where they were supposed to be in life, and really didn’t think that I was going to be that person. So I was overwhelmingly filled with joy.”

Besides The Neon Demon, Lee gushes about Gods of Egypt, an epic action film released in February, in which she plays an “eight-foot, albino, serpent-riding assassin”. She’s doubly excited that, after the interview, she’s off to act in a campaign for Kenzo shot by Sean Baker, director of one of 2015’s most trailblazing films, the iPhone-shot Tangerine. “It’s not a feature or anything, but I’m pretty stoked about the chance to work with a guy like that,” she says. The result is “Snowbird”, a short film that sees Lee bringing around a cake she baked to her neighbours in a desert trailer park. (Between Fury Road, Gods of Egypt and “Snowbird”, what’s up with Lee and the arid plain, anyway? Perhaps her sharp features and milkweed-hued hair are best suited to sun-bleached surroundings.)

Growing up, the Kershaw family of Kensington, Australia only had three movies on video: The Adventures of Milo and Otis (a “fucking stupid movie about a cat and dog that talk”), Throw Momma From the Train (the Billy Crystal / Danny DeVito black comedy), and The Little Mermaid. Lee hated the first two, but The Little Mermaid was a different beast altogether. “I was convinced I was going to be a mermaid when I grew up,” she says, cracking a smile. “I was a crazy child. Convinced.”

“I was convinced I was going to be a mermaid when I grew up... I was a crazy child. Convinced” – Abbey Lee

In between her iPhone and a clear case, Lee has slid a cutout picture of Ariel. It’s about the only colourful thing she seems to own. Dressed from top to toe in black, she has little tattoos peeking out from her sleeve, on her middle finger, and behind her ear. Not very mermaid-like. But the metaphor sticks. In the Kershaw era (she dropped her surname around the release of Fury Road), Lee was a princess in a fashion Atlantis. Now she wants to move in a new way. “I wouldn’t say it was necessarily cathartic for me to do this role,” she says of The Neon Demon. “It was more like I knew exactly what I had to give her, and I knew exactly how she needed to feel.”

Lee was more than happy to cull from her years of experience to help Refn anchor his surreal vision of the fashion world. “I was never stumped on anything,” she says, casually blowing on her fingernails. “(Casting me) was a way for him to have someone that he felt comfortable with, who could communicate with him. And it was very fucking important for me that it was done right. He knew I was always going to stay true to the industry and want to be there when he was making the decisions. I became a vessel for him.”

“With her knowledge and status in the fashion industry, she was free help,” explained Refn between takes last year. He was filming a scene that had Fanning spinning around as a designer played by Alessandro Nivola ripped off part of her dress. The whole time, English punk band 999’s 1978 single “Homicide” played in the background. “I just said, ‘What’s real? What’s not real? What can happen? What can’t happen? What’s interesting? What’s not interesting?’” he continued. “If you’re going to make a movie about a brain surgeon, you need to know pretty basic things about the brain.” Fanning, a fashion junkie, has looked up to Lee for years. “When I heard Abbey was going to be in the film I was like, ‘Oh my God, Abbey Lee! That’s so cool!’ I had to learn to do the catwalk, so we did a walking session. She told me how to place my arms. It’s so specific. Abbey’s the expert, for sure.”

“Advertising has become so fucking brutal. It’s in your face all the time, and I’d be stupid to pretend that it didn’t affect me also” – Abbey Lee

Lee, for one, has seen first-hand the lengths people will go to in order to try and grasp at beauty. “We are a product of our environment and what we’re shown,” she says. “Advertising has become so fucking brutal. It’s in your face all the time, and I’d be stupid to pretend that it didn’t affect me also. I think that women, much more than men, are conscious of ageing… Very, very conscious of the attention they receive from the outside. The Neon Demon is essentially about a very real subject, about dying beauty and dying youth, and what people are doing to maintain it and try and reach out for it. I think that the way Nic approached it, people are going to be able to respond in a very real way. I hope.”

There’s a scene in The Neon Demon where a Báthoric bloodbath is rumoured to take place in the form of models and other industry accomplices feasting on Jesse. It is a scene that distils society’s cutthroat obsession with youth into a carnal fantasy, a metaphor for what we must do to maintain our desirability, our relevance. I ask Lee if her character, Sarah, is so thirsty to relive her youth that she too drinks from Jesse’s virginal body, ravenous enough to become a cannibalistic model. Lee tilts her head, pursing her lips in contemplation. “I think, for a moment, they all are,” she says finally, meaning all of us.

The Neon Demon is out in UK cinemas July 8