Getting blazed with Kim Il-sung, sex with Bernie Sanders, why Donald Trump is a wasteman and other pearls of wisdom from within the weed clouds

At London’s 4/20 rally, the trustafarian lies down with the Rastafarian and the roadman makes peace with the steampunk. A thick fog of weed smoke masks a diverse cross-section of society, united by a counter-cultural mindset and a willingness to share their Tesco’s own-brand cheeseballs. We headed down to the Hyde Park jamboree in pursuit of hempheads willing to speak some serious home truths. The vibe was more hot box than hot take, but we found a handful of political commentators willing to share their wisdom with the world.

Five of the most explicit anime films ever
4/20 rally, London9 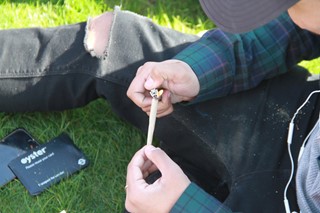 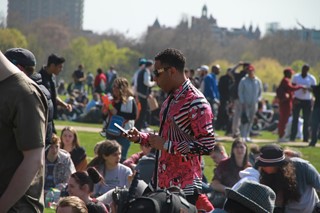 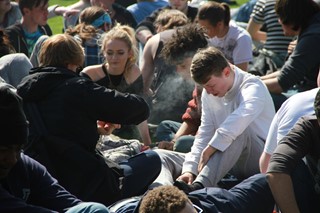 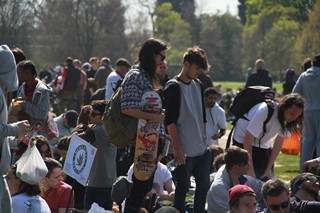 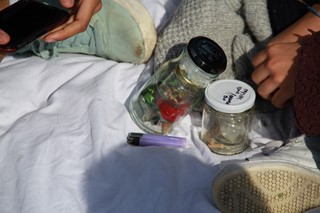 If you were elected President of the USA, what would your first policy be?

Derek: Well, it’s a tough question… but my first move would be to decriminalise cannabis. The people have to be educated.

Following on from Trump’s victory in the New York primary, do you think he’s likely to secure the nomination and then the presidency?

Derek: If Trump gets in there will be two million people waiting in line to kill him. It’d be like JFK and Lee Harvey Oswald, but amplified. I’d cap his ass at the inauguration.

If you could smoke a joint with any politician, who would it be?

Amol: For me, it has to be Kim-Il sung. He was out of this fucking world. He was the first leader of North Korea. He just said, you know, I’m going to be supreme leader, and he was. He created so many positions within North Korea, and they were all for himself. How fucking awesome. I wish I was eternal leader of something.

Any other favourite dictators?

Oz: Well, he was a very good politician.

Oz and Amol asked us to shout out their bands, Rain Maze and Brewer

Vee: Would you like a Colin the Caterpillar sweet?

Yes thanks. Will you be backing Zac Goldsmith, Sadiq Khan or one of the other candidates?

Reuben: Who are they?

If you were elected as mayor of London tomorrow, what one policy would you bring in?

Jamz: Definitely legalise weed. All these studies saying it’s bad for you are bullshit, paid for by the government. I’d let the people know the truth.

Henry: It was only made illegal because timber companies were losing loads of money to hemp companies, so they pushed for it to become illegal. It’s incredibly racist to Mexican people. It was given a Spanish-sounding name to put people off.

If you could smoke weed with any figure from history, who would it be?

Vee: Anyone from the olden eras. That’d be so funny.

Any olden eras in particular?

Henry: Then you could get the message out.

Who would be the worst person in the world to get baked with?

Vee: Any one of the Rothschilds.

Reuben: Attila the Hun. Or Vlad the Impaler.

Jamz: No, no, Vlad was misunderstood. He had some weird disease (hemolytic anemia) so he didn’t have enough iron in his blood. So sucking people’s blood made him feel better. It doesn’t justify it, but it does explain it.

If you were elected mayor of London tomorrow, what would be your flagship policy?

OK, what would be your next move?

What would your next policy be if you were elected mayor of London?

Gary: I’d put student debt up and get rid of the grants.

Phillipe: He’s a singer. He’s married to the woman off The X Factor with the big lips, isn't he?

Hi guys. We were just talking about political violence. If you could beat up one politician, who would it be?

George: Definitely George Osborne. He’s got the most punchable face.

Toby: Ed Miliband. Well, I would say Ed Miliband, but I feel like he’d probably cry. He struggles to eat a bacon sandwich, so I feel like I could definitely take him.

If you could give one bit of fashion advice to the readers of Dazed, what would it be?

Toby: Personal style is totally overinflated as a concept. People go to such lengths to look like other people, but I believe in individuality. I like stuff that’s casual and comfortable. Just random stuff. Sports clothes, chequered shirts. Steampunk.

What do you think of Donald Trump’s chances in the US Presidential election?

If you were elected President of the United States, what would your first act be?

I thought so. Thanks.