In her first in-depth interview, the daughter of Kim and Thurston talks making art, growing up with alt-rock royalty and why she has no interest in playing the fame game

“Coco?” A girl in a delicate silk shirt looks up shyly from her seat at a crowded coffee chain. We spoke on the phone a few days ago, and I’m guessing she’s not the type to jump up and air-kiss. Instead, she half-smiles and lowers her sparkling, solemn eyes. She’s a perfect composite of her well-known parents, as if she got to pick the more rounded nose, fuller lips, straight blonde hair and super-long legs. She’s not a model, but she could be. Actually, she has no agency and no publicist. Her school email address is listed on her website, which features her latest drawings and paintings: stark, beautiful and funny multimedia efforts that perfectly sum up the deep despondency of the average millennial – and of the college-age kid suffering the first crushing realities that come with leaving home. In the coffee shop, nobody recognises her.

In fact, up until earlier this year very little was publicly known about Coco Hayley Gordon Moore, the daughter of Kim Gordon and Thurston Moore, founding members of the unparalleled force that was Sonic Youth. A quick Google search brought up only the record of a regular girl’s coming of age: braces-filled Myspace-era snapshots and childhood birthday parties. All that changed in July, when Marc Jacobs had David Sims shoot the designer’s best friends and biggest influences for his AW15 campaign. ‘Kim and Coco’ simply had to pose: Gordon, after all, was in the first-ever Marc Jacobs ad, while Gordon Moore, her parents and Moore’s niece had all appeared in a campaign shot by Juergen Teller in their happy home back in 2003. 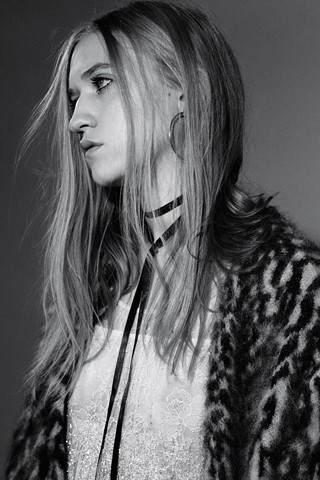 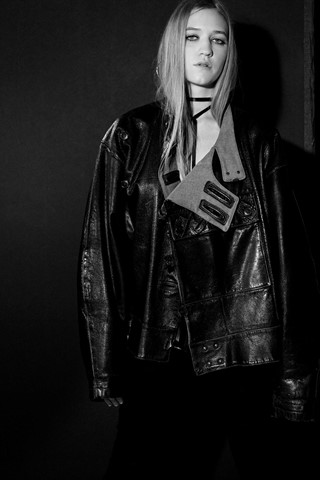 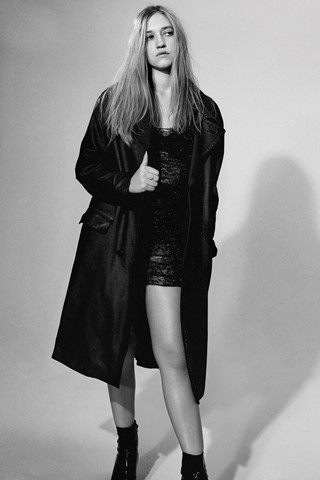 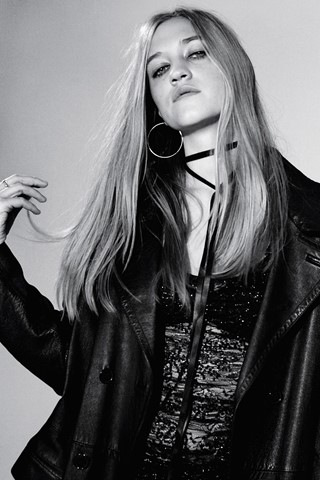 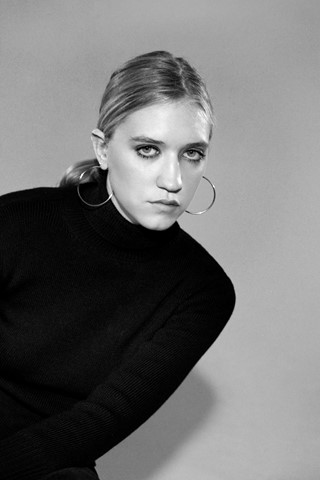 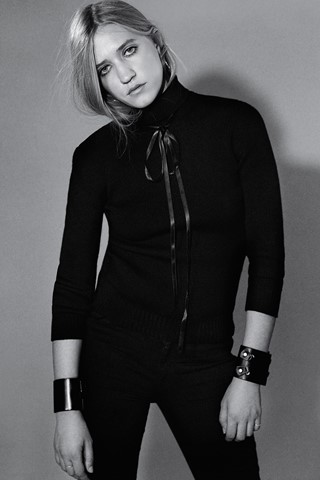 One would expect Gordon Moore to be an all-around It girl by now, whether she liked it or not. Instead, she’s shrouded in mystery. It’s just one of the traits that makes her the ultimate millennial in terms of attitude. Hers may be the first generation that doesn’t want to be famous, since being well-known now means being picked apart. “My Instagram is private,” she says. “I’m a pretty private person in general.” I ask if she’s met many other celebrities’ kids to compare herself to. “Oh yeah,” she smiles. “Totally different points of view. I remember meeting some who acted much more grown-up than me, already drinking and smoking. That was not me. I was a late bloomer – or maybe normal, but late in that context of experimenting.”

She’s just finished shooting with Collier Schorr, whose art photography is represented by 303 Gallery in New York. Gordon’s art, too, is represented by 303. In fact, Schorr’s involvement in this shoot was what caught the attention of the normally camera-shy 21-year-old. Although ‘shy’ isn’t quite the right word. Gordon Moore is quietly confident in person, yet surprisingly age-appropriate in her mannerisms. The one noticeable difference is an un-flirty practicality not often seen in girls her age who are this pretty.

“I guess people do look up my name, and that’s horrifying... Someone made me a Wikipedia page and my parents had it taken down because it was so creepy” – Coco Gordon Moore

“I’ve seen first-hand what fame can do to a person, and I have no interest in it,” she says. It’s not quite hypocritical. This story most likely won’t make her any more famous than she already is – even if, up until now, she hadn’t done a single print interview or posed for a studio portrait alone. Fame is relative. But with recent developments in her family, the demand for access to her life has increased. And if she’s going to be seen, Gordon Moore would like some control over how. She lives in the Midwest and attends the School of the Art Institute in Chicago, where she’s been since 2011, the year she left her Northampton, Massachusetts home, and the year that her parents and their band broke up. Before we meet, she sends me a link to the website she made at school to display her artwork. It features a selfie in which her face is obscured.

We are looking at a printout of one of her newer paintings, which repeats a scrawled phrase she’s used in at least one other work: “Today I broke a chair.” “I like that it has a lot of different meanings,” she explains. “It can be that someone sat down and it was accidental, or that it was in anger.” A series called Gossip Paintings uses overheard fragments of conversation and inside jokes to make an otherwise stark composition much friendlier. Not surprisingly, she says she’s influenced by Raymond Pettibon’s work – which happens to include an iconic sleeve for a certain band’s 1990 album, Goo.

Perhaps because she’s in awe of her family circle’s cultural influence, Gordon Moore’s eyes are always ready to roll in reverence. “Growing up, every time I’d bring something to my parents, they’d be like, ‘Yeah, we know,’ or, ‘Yeah, you met him as a baby.’” Even when she talks about other things – like friends, boys, and pop music – Gordon Moore doesn’t dissolve into nervous giggles. And it has to be said: her monotone voice is a slightly higher-pitched version of her mother’s. Other similarities between herself and Gordon that Gordon Moore ends up naming are their “aesthetics and conceptual interests”, and fashion senses – she and her close cousins “wear a lot of (Gordon’s cult 90s fashion label) X-Girl… We love it.” I ask about music, and Gordon Moore finally laughs. “I like pretty much everything (my mom) likes, but she does not like a lot of the music I do, like pop radio. The stuff I listened to when I was younger, she hated. My dad didn’t care. He would try and get into it.”

Gordon Moore’s Tumblr reveals even more of what the trio do and don’t have in common, as it’s filled with images from the 90s – including a young Gwen Stefani and Poison Ivy-era Drew Barrymore – but there are plenty of gifs of her current obsession, Drake, too. (There’s also a crowd shot from the Simpsons episode in which Sonic Youth guest-starred.)

In part because of her unorthodox upbringing (her parents started bringing her on tour with them when she was around six months old), Gordon Moore is composed to the point of sometimes sounding jaded, but without pretension. Since 2011, she’s had to face the pitfalls of online exposure head-on. “It was a hard year,” she sighs. “Dealing with the internet when that was happening was hard, because everyone knew. People were taking sides when they didn’t know what was happening. Parents getting a divorce is hard for any kid, but it was also icons separating, because I can’t help but view them like that.” (In 2011, Licorice, the cat whose name Gordon Moore has tattooed on her wrist, also disappeared.) 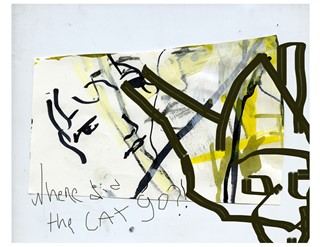 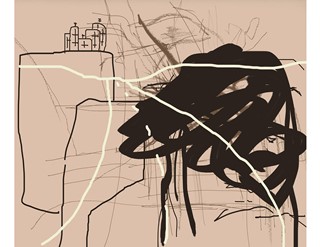 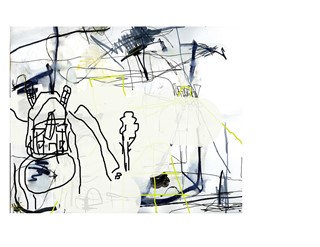 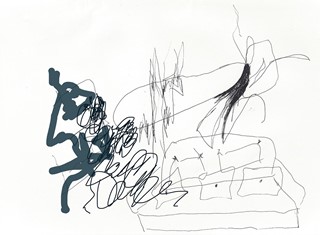 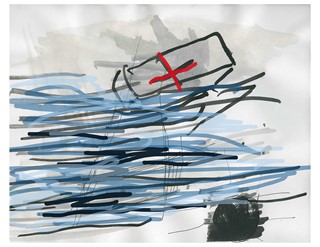 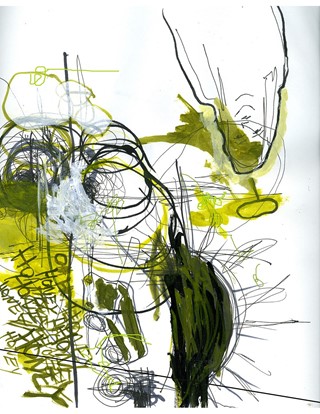 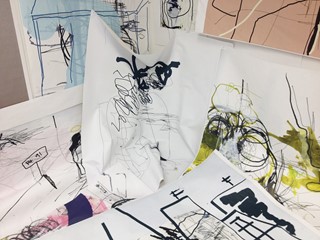 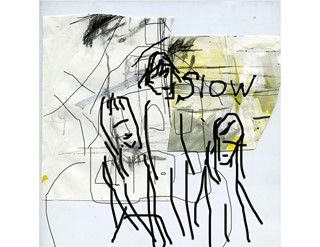 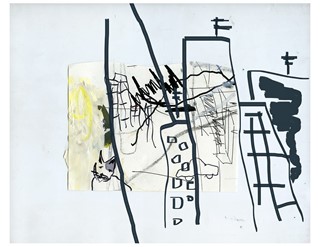 When her parents and their band split up, the generation that had projected all of its lost faith in romance on to these rock stars almost felt like their parents were divorcing, too. In some ways, it was worse: after all, our parents might be broken apart by something as cliched as a younger woman, but our parents aren’t perfect and cultured like Kim Gordon and Thurston Moore. It’s another way in which Gordon Moore’s status of ultimate millennial is solidified. Her suffering is everyone’s, but worse.

Next, Gordon’s memoir, Girl in a Band, became the exemplary last word on a couple that seemed unbreakable. “I’ve read parts of it,” says Gordon Moore, “but I can’t read the whole thing. It gets really emotional for me.” Since the divorce, Gordon has moved to Los Angeles, where her daughter visits her. Moore moved to London (Gordon Moore thinks), but she doesn’t plan to visit. “It’s too long on a plane,” she adds, referencing a recently developed fear of flying.

The constant spotlight on her family has made Gordon Moore hyper-aware of how she might be perceived – especially online. “I do think about (putting stuff online) maybe more than other people, because it’s going to be referenced as, ‘This is their daughter and this is what she’s doing.’ I guess people do look up my name, and that’s horrifying. I don’t think about it that much until someone sends me a link that’s like, ‘People are talking about this.’ Someone made me a Wikipedia page and my parents had it taken down because it was so creepy. It said I was in a band in fourth grade. Like, how do you know that?”

“People expect me to be really feminist because my mom is such a feminist icon,” she continues. “It’s a subject I’ve stayed away from, or tried to not say too much about, just because it’s complicated and there are so many views on what it is and what we should do about it.” Her beliefs seem inoffensive enough – “equal rights and equal pay”, she explains in one breath – but she’s seen what making statements less bold can do to a well-meaning woman. Instead, she jokes. Her @mooreweed Twitter feed proffers remarks that gain an extra edge knowing where they come from, such as “a guy just said 2 me ‘whats (sic) up slut, dirty whore’. i would have said something if i wasn’t in such a rush to get to chipotle!”

In another of Gordon Moore’s paintings we see the phrase, “Today I spent 14 hours in my room on my computer.” As per her instruction, I consider different readings of the statement. Here’s one: according to the contemporary narrative, rich histories are finally available at our fingertips, thanks to the internet. But none of it is truly within reach. Sonic Youth is one such history that none of us, not even the direct offspring of it, can live. The 90s, to the millennials, was the last decade of ignorant bliss. The youth of that decade, as if sensing their own cultural legacy, made the stoner their totemic figure of cool, whereas the ‘it’ attitude of today is closer to a well-researched paranoiac. I ask Gordon Moore if she’s ever considered that she is the quintessential millennial, and she nods. Of course she has.