From troubled teen in Nymphomaniac to Miu Miu muse, the actress has a flair for extremes. Meet the 21-year-old iconoclast burning up the big screen

Mia Goth, not quite a star yet, is already primed to be notorious. She’s the actress who has pissed on a French icon. The inscrutable model who has angered media watchdogs by simply looking like herself. The partner (in crime) of Hollywood apostate Shia LaBeouf. The upstart instigator gone apocalyptic straight out the gate. And yet, through unrelenting roles in Lars von Trier’s Nymphomaniac to Stephen Fingleton’s forthcoming The Survivalist and a strangely controversial Miu Miu campaign, there’s a thrilling sense that Goth is only just getting warmed up.

“I just love roles that scare me,” the 21-year-old says. “Roles that are far away from me – the further away the better! You have to take that step and morph yourself into someone else.” On the phone from Berlin one morning, Goth sounds lovely – a chirpy conversationalist with a crisp, expressive British accent that feels ten shades lighter than the difficult characters she embodies.

In apocalyptic thriller The Survivalist, Goth plays Milja, the teenage daughter of a beleaguered, ageing mother (Olwen Fouéré) desperate for refuge with a hermit character (Martin McCann), the titular survivalist. In a Darwinian exchange of sex for shelter, and young blood devouring old, Goth becomes the survivalist’s sole sanctuary and source of hope. Goth threw herself into the role with grim intensity, pushing herself to physical extremes. “I lived on a very strict diet because food wasn’t in abundance,” she explains. “My body had to reflect that. I had a boiled egg in the morning, some nuts later on and I would just walk. Every day I would just pack my bag and start walking through the beaches and the forest. I didn’t wash my body, hair, clothes or anything for the entirety of the shoot.” 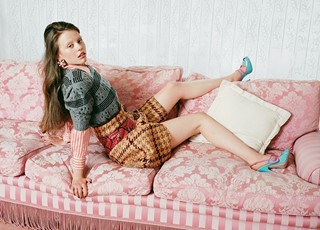 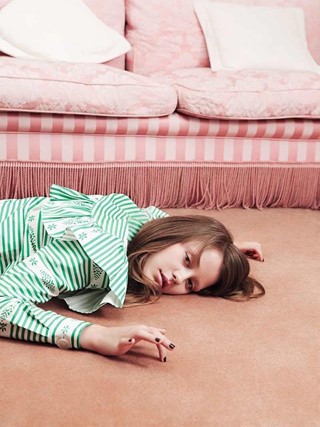 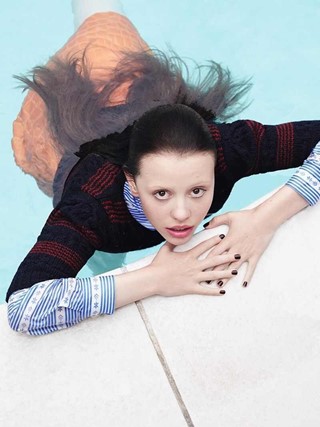 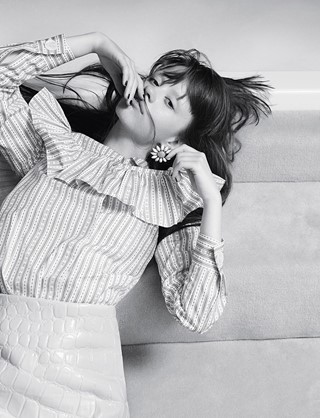 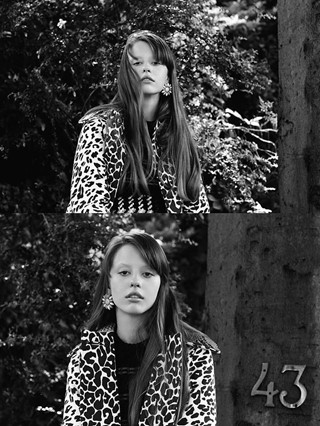 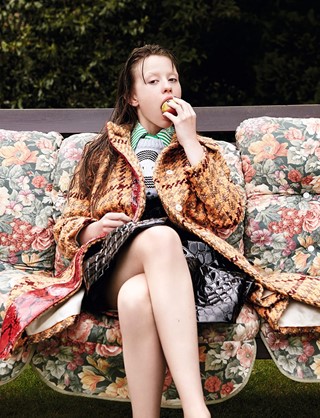 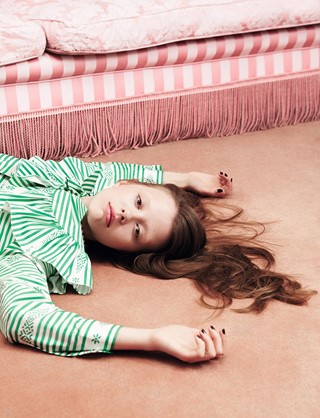 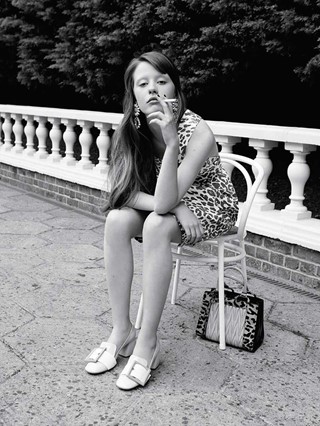 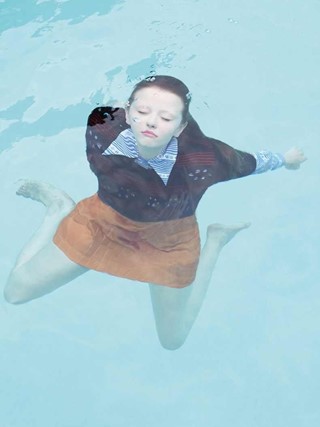 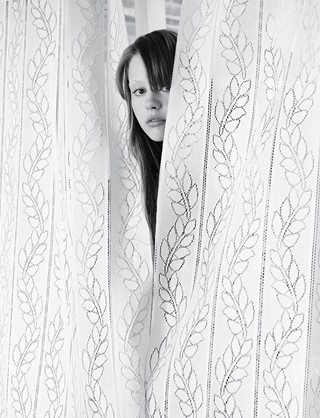 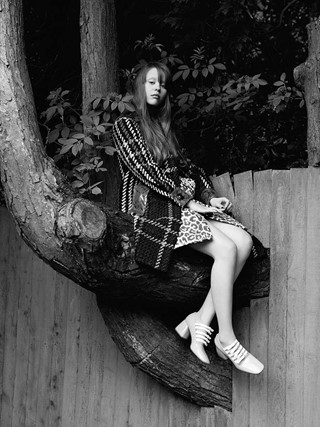 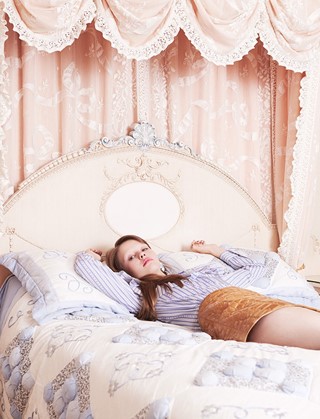 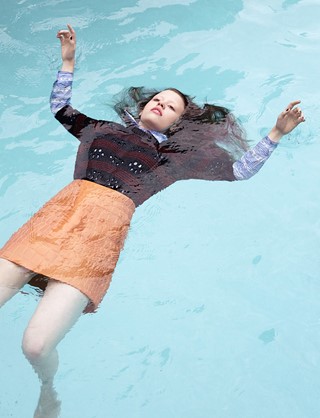 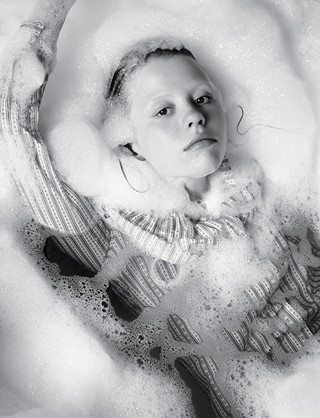 Though it’s easy to marvel at such dedication, Goth says the whole cast shared a similar commitment to the project, shot in Northern Ireland last year. They even camped out to channel their characters’ sense of terminal desolation. “You don’t feel you have to prove to yourself that you are that character, because you really are living (in) that world.”

When the movie that Goth gave up basic hygiene, nutrition and sanity for hits cinemas this winter, she’ll also be unmissable in a widely promoted campaign for Miu Miu. That someone willing to co-opt the lifestyle of a feral wretch could also be tasked with playing ambassadress to Miuccia Prada’s line speaks to the genius contradictory streak Goth is clearly cultivating in her work. If a part speaks to her, she won’t cease until she’s created a whole new language around it and made it her own. Anyone attempting to typecast her will be left scratching their heads.

Ironically, her raw scenes in The Survivalist and Nymphomaniac have earned her acclaim, not controversy, while the Miu Miu ads drew fire for presenting her as ‘underage’ for reasons no one can really quantify. Bambi-eyed, bare-browed and with pale skin and hair of a similar shade, Goth looks like a Deviant Art version of Vermeer’s “Girl With a Pearl Earring”. Her stark appearance is both modern and unknowable, making her an unsettling muse. In the Steven Meisel-directed campaign for SS15, she appeared in ruffles on an unmade bed, looking wry. As in, pretty much like a Prada girl, and pretty much like herself.

“I was a little surprised by that reaction. Never did I feel exploited or undermined in any way,” says Goth, who also appears in the brand’s more whimsical, less controversial AW15 campaign, Subjective Reality. “While we were shooting, I felt very empowered and that we were all on the same level, just trying to create beautiful images.”

It’s a theme that Goth revisits often in conversation: the idea that she’s searching for kindred spirits and stories to tell. “Oscar Wilde said, ‘Give a man a mask and he’ll tell you the truth.’” she says. “All I’m trying to do with my craft is look for great masks.” Her first film role came courtesy of divisive Danish director Lars von Trier, known for his unflinching nihilism. He cast her as P, the damaged teen protégé of Charlotte Gainsbourg’s sexually caustic character, Joe, in Nymphomaniac: Vol II, which culminates in Goth urinating on Gainsbourg in an act of contempt. Stories of Goth’s audition with Von Trier have made their rounds, and deservedly so: he told her to imagine her cat had died, then read her lines. Naked. She did so, not missing a beat. “By the end of it, my cat really had died. In my head it was no longer about a cat, it was about a family member, and I really felt it. I felt drained.” She’d given it her all – and she got the part.

“I don’t think optimism is the best quality for an actor, in the same way you wouldn’t want an optimist to be a traffic controller – you want a guy that’s really worried about every plane in the sky!” – Mia Goth

Opposite Gainsbourg and onscreen (and soon-to-be real-life) lover Shia LaBeouf, Goth played P with the sad, empty eyes of a Mark Ryden ghost. Her screen-time was brief, but the impression she left was indelible. “I saw a very broken soul,” she says. “I saw a good girl at heart that wants what any other 14-year-old girl would want: friends, family and a nice home to go home to, but she didn’t have that and as a result she had to toughen up.” As with most Von Trier fare, there’s little redemption to be had.

LaBeouf’s more recent immersion in challenging cinema coincides with his ongoing, sometimes polarising social experiments inspired by metamodernism. At the time of our chat, his existential/motivational ‘JUST DO IT’ video had already been appropriated for sports games. Goth is coy on the details of their relationship, but given her own interest in psychology and perseverance, it’s not hard to imagine the attraction. Despite their subversive rep, they are often snapped together in charmingly banal situations: horsing around at the mall, getting groceries, nursing iced coffees – utterly indifferent to how paparazzi games work. Instead of a shy smile, Goth often scrunches up her face quizzically at the cameras, triggering online banter about her resemblance to the curmudgeonly feline phenomenon, Grumpy Cat. For two young provocateurs, they seem a lot like a pair of goofy kids just having a good time.

Nymphomaniac was a watershed moment for Goth, not only for the boon it provided in her career, but also in terms of her dedication to her craft. She worked seriously on her acting technique, calling Gainsbourg her “teacher”. “Lars, Charlotte and I would do readings and I would be amazed at how little she would have to give to convey so much,” Goth reflects. “Just watching her, she’s like a magician. A magician pulls a rabbit from a hat and actors pull truth from fiction. Less is more, that’s what stuck with me, and probably will for the rest of my life.”

Goth could very easily have opted for a softer career route. Discovered by photographer Gemma Booth at age 13 while attending Underage Festival in London’s Victoria Park, she showed promise as a young model. “I loved her look immediately,” says Booth. “I could see what a natural she was: uninhibited, cool, funny. And she knew what to do in front of a camera.” Not only that, she knew what to do behind the scenes. When Booth invited her to assist on shoots for work experience, Goth characteristically threw herself into the role. “I was doing a shoot with an alpaca and she ran across a field to catch it when it ran away!” Two years after spotting her, Booth brought Goth to the famed Storm Models, where she was immediately signed.

Fashion was a fun ride, but acting was her destination. With half-Brazilian, half-Canadian roots, Goth enjoyed an intercontinental youth. (Her middle name is Gypsy, illustriously.) Her family, who were “on cloud nine” when she landed the part in Nymphomaniac, have roots in theatre. Her grandmother, Maria Gladys, is an eclectic TV, film and stage actress in Brazil, still working today at 75. “For the first five years of my life, I lived in Rio, and she would take me to her film sets,” says Goth. “It was the first time I was exposed to that world. That was when I knew that was all I wanted to do. I was drawn to how much of a family that world felt like.”

She credits her grandmother with instilling the notion of having “confidence in everything you do”, a trait that’s reflected in Goth’s habit of pausing thoughtfully when asked a question, before responding with a composed ease that feels totally instinctive. “Fear for an actor is poisonous,” she says. “Mind you, I think I’m quite pessimistic about my work. I don’t think optimism is always the best quality for an actor, in the same way you wouldn’t want a super-optimist to be a traffic controller – you want a guy that’s really worried about every plane in the sky! When I go to work, I’m looking for plane crashes. It’s that lack of comfort that keeps me focused.”

This autumn, Goth’s doomy streak continues as she stars alongside Josh Brolin, Robin Wright and Keira Knightley in Baltasar Kormákur’s Everest, a 3D thriller about the 1996 mountaineering disaster. She plays Meg, the daughter of one of the climbers in mortal danger. But right now, she’s consumed by her work in Berlin on Gore Verbinski’s new horror film, A Cure for Wellness, alongside American actor Dane DeHaan, who has quickly gained accolades of his own for playing iconoclasts (James Dean in Life and Lucien Carr in Kill Your Darlings). “Mia has an innocence about her that is striking,” says DeHaan. “She is ready and willing to explore a moment. These are rare qualities for anybody in our business, but necessary qualities for anyone who wants to be great.”

Goth’s yearning for new experiences comes off almost selflessly. Though she’s busy filming, she’s dying to properly see Berlin this summer. She compares her recent German explorations to the iconography she remembers from her school lessons. “I always wanted to visit Berlin,” she says. “I’m a bit of a Cold War geek, so to finally come here is quite special – to be able to put a face to the story.”

Don’t expect to find any slices of life from Goth’s German adventures online, though. She is nowhere to be found on social media. “I’m a bit of a grandma, I don’t really understand the Twitter and the Instagram,” she laughs. “I think it’s much better to live it. I love people, I love behaviour, that’s what fascinates me. I love the real-time, minute-to-minute of a person – you don’t really get that on social media.”

Instead, Goth prefers to let the work do the talking when it comes to revealing her true nature. “The better you know yourself, the better you are at your craft,” she says. “My only goal is to be the best actress I can be. You have to give it everything. All I have as an actress is the revelation of my soul.”