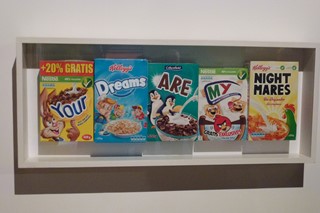 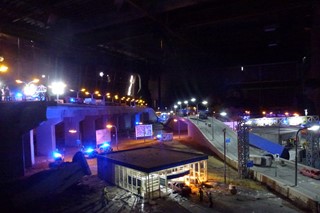 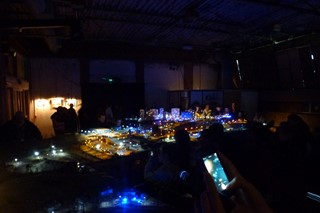 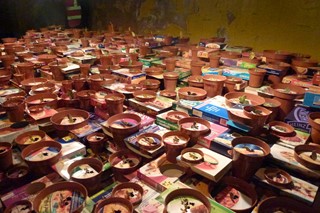 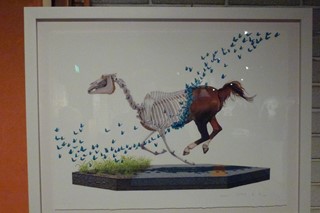 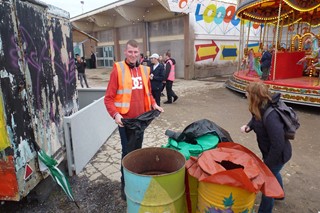 Disclaimer: I am not a massive fan of Banksy. Something about his ‘street art’ being co-opted by the middle classes doesn’t sit quite right with me. People who love Banksy often strike me as the types who want to prove that they really, really understand inequality way better than you could ever hope to. That said, I was fascinated to see how the world-renowned artist could make Weston-Super-Mare and the Tropicana theme park site more dismal than it already is. I went to Dismaland so you don’t have to.

On arrival I was greeted by a large snake of control fencing and a portacabin ticket office. I paid my three pounds, got my hand stamped, had my bag searched and my biro confiscated. Apparently someone had graffitied Dismaland the previous day so pens were now banned inside the park. Banksy didn’t want anyone "doing a Banksy" on any of his Banksys.

After having heard of the nightmarish struggles for tickets online, the struggles that turned out to be a hoax and all part of the "Dismaland experience", everything was really straight forward. I queued for an hour and chatted with a steward who – to her credit – looked like she was having a pretty dismal time. She said that she’d been there for eleven hours the previous day and unable to even see any of the park.

Before finally making through the unwelcoming gates of the park I was held at a zebra crossing for "health and safety reasons" by a very friendly security guard. He challenged me to try and get a smile out of one of the stewards. I couldn’t – I'd later find out that a "lack of smiles" was a recurring theme.

Entering the theme park, it was difficult to determine what was art and what was original Tropicana decoration. The town, the venue and the weather are a perfect match for Dismaland and I wondered if the people of Weston-Super-Mare and the Tropicana were offended when Banksy and his team approached them wanting to build the shittest, most depressing theme park in the world on their turf.

I wandered into one of the dilapidated warehouses and was surprised to find a traditionally laid out exhibition. On my way to the park I had pictured riot police, defaced pictures of David Cameron and rabbits wearing gas masks. All these things were there, but alongside beautiful images of melting ice caps, photos of a turnstile in a scenic location and pieces by artists such as Damien Hirst, Jenny Holzer and Dietrich Wegner.

While stewards may have proved difficult to talk to, I did manage to speak to some fellow punters, a woman called Kay and her son Simon. Kay was a huge Banksy fan and come from Ireland to see his Bristol exhibition back in 2009. She was blown away by the whole event but her young son Simon didn't look so impressed. When I asked him if he was enjoying being at the park he said "Yeah, because I hate Disney".

Feeling lonelier by the second, I attempted conversation with a couple of stewards, only to be met with shrugs and sighs. I was eventually accosted by one of the "Dismalites" after being caught touching a giant mushroom cloud treehouse made of cotton wool.

I took the opportunity to find more about his experience working at the park. His name was Christos and he was extremely quiet. He told me that he’d been working at the park for three days, that he was a student and that his favourite thing about the park was feeling dismal. I asked another steward how she got the job working at the park and she mumbled that it wasn't really a job and that she wanted to watch X Factor on the TV in one of the exhibits but wasn't allowed to. This, she said, made her feel dismal.

Somehow, I felt right at home in amongst all this glumness. How could anyone feel chirpy in Weston-Super-Mare surrounded by morbid art and depressing stewards?

Personally the art left me a little underwhelmed (maybe it was meant to) and I would like to have seen a few larger pieces that I hadn't already seen all over social media and the news. However, the atmosphere truly was dismal and the stewards totally non-compliant with my requests for interview. What more can you ask for?